INDONESIA’S RAINFORESTS MAY SEEM VERY FAR AWAY FROM THE U.S., yet their destruction is affecting the whole world

This holiday season, let's keep Indonesia in mind.  These people on the coastline, many of them holiday tourists, we caught off guard by Saturday's tsunami that you can read about here.

While learning about the tsunami, I came across this report on Indonesia and other efforts by the Sierra Club.  A lot to ponder in light of the perspective on just important and valuable Indonesia is to the planet as expressed below.

Happy to share several links to organizations that are helping out the victims.

Consider making a donation, as well, to the Sierra Club—or any environmental organization of your preference.  We must think in a planetary way if we are to survive as a human species.

INDONESIA’S RAINFORESTS MAY SEEM VERY FAR AWAY FROM THE U.S., yet their destruction is affecting the whole world. They are the third largest rainforest region on Earth; vital in regulating the climate and critical to our future in a dangerously warming world.
What happens to forests happens to all of us, and Greenpeace is bringing all of our best strategies, strengths, and skills to the fight to stop Indonesia’s rainforests from being further destroyed by the expanding palm oil industry. Over the last few months we have brought high, global visibility to the issue—with the release of reports on Greenpeace’s in-depth investigations and exposés, the use of creative communication to inspire people to take action, and the deployment of the full power of our movement to effect change.
As we defend forests overseas to fight global warming, we are striving for climate leadership here at home. While the Trump Administration and its regressive policies require our most determined resistance, Greenpeace is simultaneously pushing for real climate leadership in California to create the progress we need to address global warming.
Greenpeace pulled out all the stops in the run up to Governor Jerry Brown’s Global Climate Action Summit, using creative direct action and grassroots organizing tactics to demand that before he leaves office, he acts as the climate leader that California, the country, and the world urgently need. We’ll continue to call for him to stop new permits for oil and gas extraction, phase out fossil fuels and related infrastructure, and move the state towards a fair and just 100% renewable energy economy to model climate action not only in California, but for other states and countries as well.
Your support is what makes it possible for Greenpeace to go the distance in every fight we take on. Whether it’s saving rainforests and critically endangered animals, protecting vulnerable marine ecosystems, taking on the world’s biggest corporations, or any other issue affecting our earth, you are the reason Greenpeace can be a powerful force for a better future for people and the planet.
For a green and peaceful future,

Greenpeace, Inc. is the leading independent campaigning organization that uses peaceful direct action and creative communication to expose global environmental problems and promote solutions that are essential to a green and peaceful future. Please visit greenpeace.org to learn more about Greenpeace, Inc., and greenpeacefund.org to learn more about Greenpeace Fund, Inc.
This update is intended to provide a comprehensive summary of all Greenpeace campaign activities. Please note that all donations to Greenpeace Fund, Inc. were solely used in connection with 501(c)(3) permissible activities. ISSN: 8899- 0190. Unless otherwise noted, all contents are © Greenpeace, Inc.
© Greenpeace / Geoff Reid

By Waya Maweru
As part of our recent global campaign push to protect rainforests, our colleagues in Indonesia staged a superb direct action at Wilmar International, the world’s largest palm oil traders’ oil refinery in Bitung, North Sulawesi. On September 25th, thirty brave activists scaled 20 meter high containers to deliver a message to the industry, to stop destroying rainforests for palm oil. We are honored to introduce you to Waya, one of our amazing activists. She wrote this piece the morning of the action.
I REMEMBER WHEN I WAS A KID, Papa always took me back to his hometown to see Oma, my grandmother, every Christmas. The town Papa is from is called Manado, in North Sulawesi, Indonesia, and it’s so beautiful. Like Bali, where I study now, but less well-known.
Once, Papa invited us to travel far out of the city to Lembeh Island, famous for its underwater riches. When we were on the island we could enjoy the view of the city of Bitung in the distance, with a beautiful view of Mount Klabat on the other side.
This memory from my childhood makes my heart wince, knowing that Bitung has since become a home for forest destruction.
When I also consider that makers of everyday products like Ritz, Colgate, and Dove are contributing to the loss of the home of the Cenderawasih bird in Papua, the cute Orangutan in Kalimantan, and the Sumatran Tiger, which is getting closer to extinction, I feel even worse.
I was enjoying the sunset on Kuta Beach, Bali, thinking this over when I realized I can’t keep quiet. I want to act. I want to do something about it, to stand up to these brands and tell them to immediately #DropDirtyPalmOil.
Today, my breathing is unsteady and my palms are sweating. When the rubber boat slides from Lembeh island, my body will move from where I keep the good memories. I’ll see Bitung in the distance, with its tanks of dirty palm oil. I’ll shout, “this is not the scene I want!”
I want to see the beautiful rainforest. I want to see the wildlife of Indonesia’s pride move swiftly and dance freely in our forests. I want my life to be clean from dirty palm oil. I want dirty producers to change straight away, and no longer trash our forests.
I am Waya Maweru. I am an Indonesian woman of Manado blood. With full awareness, I will stand to fight for the future of Indonesia’s forests.
And today, standing at the doors of the world’s dirtiest palm oil giant—me and other Greenpeace activist friends from various parts of the world—are asking makers of products like Ritz, Colgate, and Dove to #DropDirtyPlamOil, drop Wilmar.
Shortly after this action, Sulawesi felt the horrible impact of an earthquake and Tsunami. We hold the people of Indonesia in our hearts and send our sincere condolences to the victims of Donggala and Palu, Central Sulawesi.
Take action for the forests by adding your name to our petition at greenpeace.org/usa/dirtypalmoil 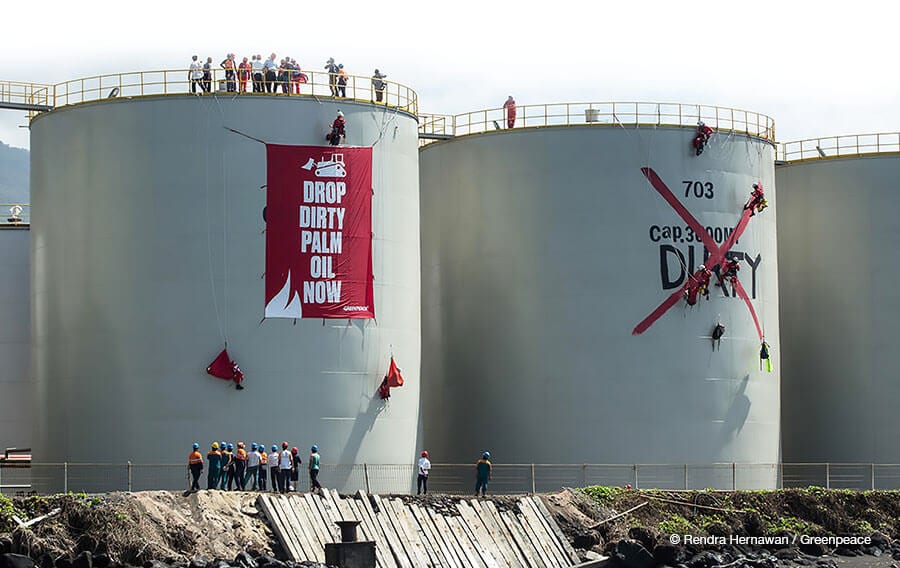 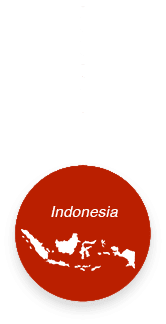 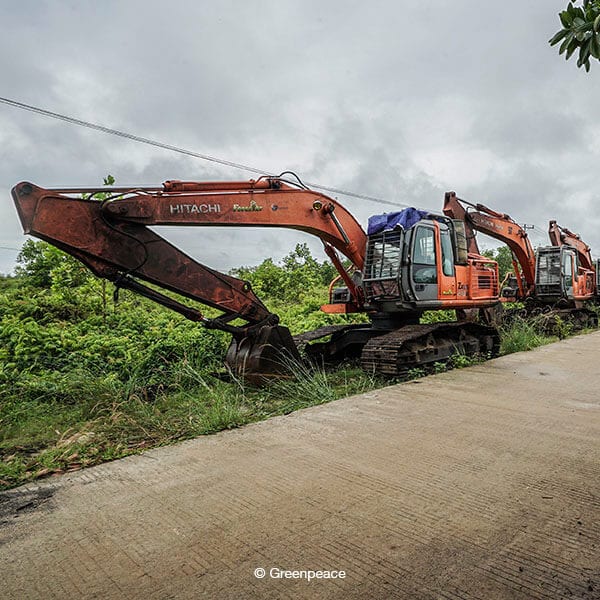 By Diana Ruiz
As a way to raise awareness of the plight of orangutans in Indonesia
and the links to deforestation, we introduced the world to an
adorable little character named Rang-tan. In a 90-second
film we tell the story about a little girl and her orangutan friend
forced from her forest home. Within just two weeks, Rang-tan
had already been viewed more than 2.5 million times, capturing
the hearts of many.
Rang-tan shows the direct link between palm oil destruction in
the forests of Indonesia and our shopping carts. Indonesian
rainforests are destroyed to grow row upon row of dirty palm oil
\found in everyday products that we all use. Palm oil is a key
ingredient in snack foods, cosmetics, and cleaning products—
this vegetable oil is in over half the products sold in supermarkets,
meaning it’s in pretty much everything we use daily.

Greenpeace is campaigning for big companies to take responsibility
and make sure that the palm oil used in their products isn’t made at
the greatest cost of our forests.
Global consumer companies have made multiple promises, pledges,
and commitments to cut their ties with companies that are
destroying rainforests. The corporate executives of leading
consumer brands like Unilever, Mondelez, and Nestlé committed to
protect forests and address climate change. They pledged to clean
up their palm oil supply chains (including soya, beef, pulp & paper,
and timber) by 2020. Meaning that they would not buy palm oil from
companies that are destroying forests. Yet despite these promises,
palm oil continues to be one of the leading drivers of deforestation.
The time is now for companies to fix the problem they created before it’s too late. We are less than 450 days from 2020 and deforestation shows no sign of slowing down.
While company sustainability guidelines now include “no
deforestation, no peat, no exploitation” (NDPE) policies on paper,
they lack tangible enforcement on the ground. Rainforest destruction for
palm oil is a disaster for wildlife, people, and our climate. These
precious forests are essential to our survival.

WHAT DO WE LOSE IF BUSINESS AS USUAL CONTINUES?

Indonesia’s rainforests are rapidly disappearing. It’s gotten so bad
that, between 2012 and 2015 roughly one soccer field of forests was lost every 25 seconds.
The rapid rate of deforestation has greatly impacted the wildlife
found in these richly diverse forests. All three types of orangutans,
the Bornean, Sumatran, and recently discovered Tapanuli species
qualify as critically endangered.
These forests are also crucial to restoring our climate. Land use
change from tropical deforestation accounts for 12% of global
carbon emissions. While forests represent huge carbon sinks for
our global climate, recent studies have shown that deforestation
rates of tropical forests are now emitting more carbon then they
absorb.
So, for the love of forests and orangutans, join us to put pressure
on these big companies to create the sea change needed to reform
the industry. 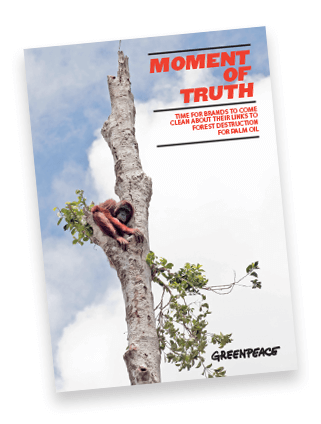 In an explosive investigative report, Final Countdown, Greenpeace reveals that some of the world’s best-known brands are still doing business with palm oil suppliers linked to rainforest destruction and human rights abuses. The report documents extensive deforestation and human rights abuses by 25 of the worst palm oil producer groups that are supplying palm oil traders and consumer companies.
To learn more and watch the Rang-tan film, visit greenpeace.org/usa/rangtan 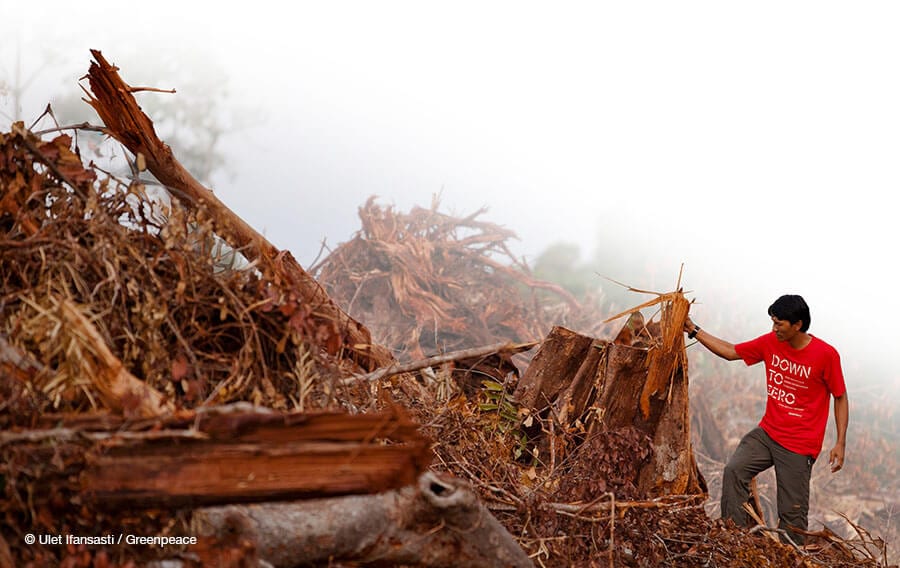