Why the Academic Achievement Gap is a Racist Idea By Ibram X. Kendi

This year marks the 100-year anniversary of the academic achievement gap–built and continuously renovated by the 100-year-old standardized testing movement. It is a centennial that hardly anyone knows about.
These days, many people are criticizing the testing movement. Colleges are slowly diminishing the importance of standardized testing in admissions decisions. We are seeing unprecedented numbers of wealthy white parentsopting their school children out of these tests.
But few testing critics are bursting its biggest bubble: the existence of the achievement gap itself. To believe in the existence of any sort of racial hierarchy is actually to believe in a racist idea. The achievement gap between the races–with Whites and Asians at the top and Blacks and Latinos at the bottom–is a racial hierarchy. And this popular racial hierarchy has been constructed by our religious faith in standardized testing.
Americans have been led to believe that intelligence is like body weight, and the different intellectual levels of different people can be measured on a single, standardized weight scale. Our faith in standardized tests causes us to believe that the racial gap in test scores means something is wrong with the Black test takers–and not the tests. And the belief that “inferior” Black minds are capable of doing as well as the “superior” White minds does not take away from the racist belief in the existence of the racial hierarchy itself. Let me explain.


In 1869, Charles Darwin’s cousin, English statistician Francis Galton, hypothesized in Hereditary Genius that “[t]he average intellectual standard of the negro race is some two grades below our own.” Galton pioneered the western eugenics movement, but failed to develop a testing mechanism that verified his racist hypothesis. Where Galton failed, France’s Alfred Binet and Thodore Simon thought they succeeded in 1905 when they developed an IQ test that Stanford University psychologist Lewis Terman revised for Americans in 1916.


An avowed eugenicist, Terman introduced and defended the viability of the nation’s first popular standardized intelligence test in his 1916 book, The Measurement of Intelligence. These “experimental” tests will show “enormously significant racial differences in general intelligence, differences which cannot be wiped out by any scheme of mental culture,” Terman maintained. He imagined a permanent academic achievement gap, a permanent racial hierarchy.
Terman’s IQ test was first administered on a major scale to 1.7 million U.S. soldiers during World War I. Princeton University psychologist Carl C. Brigham presented the test results as evidence of genetic racial hierarchy in A Study of American Intelligence, published three years before he created the SAT test in 1926.
Famed physicist William Shockley and educational psychologist Arthur Jensen carried these eugenic ideas into the 1960s. But by then, these genetic explanations—not the tests and the achievement gap itself—had largely been discredited. In other words, the construction of a permanent racial hierarchy had been replaced by the construction of a temporary racial hierarchy. 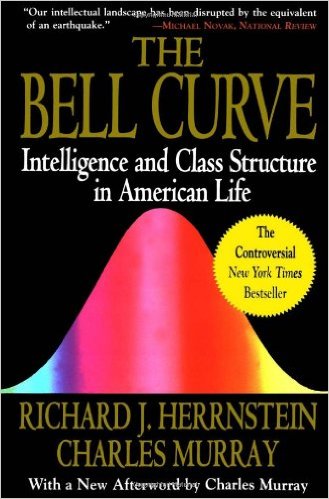 Well-meaning environmentalists had shifted the discourse to disclosing and closing the “achievement gap,” a shift that powered the testing movement through The Bell Curve controversy in 1994. “It seems highly likely to us that both genes and the environment have something to do with racial differences” in test scores, wrote Harvard experimental psychologist Richard Herrnstein and political scientist Charles Murray.
The Bell Curve sparked such an intense academic war in 1995 that the American Psychological Association (APA) convened a Task Force on Intelligence. The APA report rejected all the existing explanations for “the differential between the mean intelligence test scores of Blacks and Whites,” from “biases in test construction” to genes, class, and culture. “At this time, no one knows what is responsible for the differential,” they concluded.
No one will ever know what doesn’t exist. And yet, the racist idea of an “achievement gap” lived on into the new millennium. The testing movement rejoiced over the bipartisan No Child Left Behind Act.
Progress has been slow in closing the statistical gap. In 1964, a Department of Education report found that the average Black 12th grader scored in the 13 percentile, meaning 87 percent of White 12th graders scored higher on their tests than the average Black 12th grader. The Nation’s Report Card fifty years later found that the average Black 12th grader scored in the 19th percentile. And in 2015, Blacks still had the lowest mean SAT scores of any racial group.
At 100-years-young this year, standardized tests have come to literally embody the American doors of opportunity, admitting and barring people from the highest ranked schools, colleges, graduate schools, professions, and jobs. Standardized tests have become the most effective racist weapon ever devised to objectively degrade Black minds and legally exclude their bodies. However, some of the greatest defenders of standardized testing are civil rights leaders, who rely on the testing data in their well-meaning lobbying efforts for greater accountability and resources.
But what if, all along, our well-meaning efforts at closing the achievement gap has been opening the door to racist ideas? What if different environments actually cause different kinds of achievement rather than different levels of achievement? What if the intellect of a poor, low testing Black child in a poor Black school is different—and not inferior—to the intellect of a rich, high-testing White child in a rich White school? What if the way we measure intelligence shows not only our racism but our elitism?
Gathering knowledge of abstract items, from words to equations, that have no relation to our everyday lives has long been the amusement of the leisured elite. Relegating the non-elite to the basement of intellect because they do not know as many abstractions has been the conceit of the elite.
What if we measured literacy by how knowledgeable individuals are about their own environment: how much individuals knew all those complex equations and verbal and nonverbal vocabularies of their everyday life?
What if we measured intellect by an individual’s desire to know? What if we measured intellect by how open an individual’s mind is to self-critique and new ideas?
What if our educational system focused on opening minds instead of filling minds and testing how full they are? What if we realized the best way to standardize a highly effective educational system is not by standardizing our tests but by standardizing our schools to encourage intellectual openness and difference?
But intellectual difference, and multiple literacies, languages, and vocabularies, are only valued in a multi-cultural society that truly values diversity and difference. The testing movement does not value multiculturalism. The testing movement does not value the antiracist equality of difference. The testing movement values the racist hierarchy of difference, and its bastard 100-year-old child: the academic achievement gap.
Ibram X. Kendi is Assistant Professor of History at the University of Florida. His second book, Stamped from the Beginning: The Definitive History of Racist Ideas in America (Nation, 2016), was recently named a finalist for the National Book Award for Nonfiction. Follow him on Twitter @DrIbram.
Posted by Angela Valenzuela at 8:03 PM