New York State Performance Standards Consortium as the way to go.  I've visited several of the schools in this network in New York City over the years.

They're great small schools where young people have much more autonomy than in most public schools where they can even provide direct input into the school curriculum through thematic units across the curriculum of their choosing.  Plus, they hardly administer high-stakes, standardized test (in New York, their is the Regents exam).

This helps keep these schools interesting and relevant and children and families happy and satisfied because their children are learning. 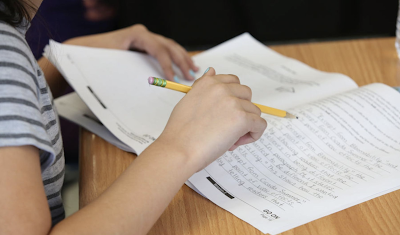 America’s decades-long infatuation with standardized testing is finally waning, and for good reasons. Despite years of training students to do better on tests, the performance of 17-year-olds on the National Assessment of Educational Progress, also known as the nation’s report card, has flatlined. At the same time, the focus on testing produced unintended consequences, including inattention to important educational priorities and growing teacher shortages.

That’s in part because test performance became a goal in many districts instead of a means to an end and, thus, a prime example of Campbell’s Law, which points to the corrupting influence of using a single measurement as a target, thus ensuring that “it ceases to be a good measure."

The federal “No Child Left Behind” initiative introduced by President George W. Bush imposed a battery of high-stakes testing mandates, which continued under President Barack Obama. If children failed to meet proficiency goals for math and English, schools faced closure, teachers were shamed and fired and children were held back. Consequently, many schools and districts focused on test prep, often sacrificing untested but important subjects like civics and neglecting the classroom give-and-take that nurtures critical thinking and creativity.

At the peak of testing mania in the 2014-2015 school year, the average U.S. student was taking 112 standardized tests in the course of a K-12 education, many of which were redundant or pointless.

Now states from Arizona to Wyoming are retreating from high-stakes testing. The announcement last month that New York’s education commissioner, a testing proponent, will resign in August, signals another reversal.

It might be easy to say good riddance, but schools still need ways to measure student progress. The accountability movement that pushed testing was a response to a genuine need to improve K-12 education. Since the 1983 publication of “A Nation at Risk,” a bipartisan report by a commission appointed by President Ronald Reagan, business leaders have warned that schools weren’t developing the knowledge workers modern industry needs, and progressive educators have criticized traditional factory-style schools for not fostering an engaged and informed citizenry.
So schools need to find new ways to show accountability advocates that test retrenchment won’t weaken standards, and this presents an opportunity to develop more robust assessments and better education.
The country’s best under-the-radar experiments are a useful guide. Chief among these is the New York State Performance Standards Consortium, a decades-old effort led by progressive educators and involving 38 high schools, which won exemptions from all standardized tests except English. Instead, students complete ambitious projects known as performance-based assessments — think mini theses with lots of research, writing and real-world projects in everything from social studies to physics, which students present to expert panels, including teachers (often from different schools) and community members.

Since launching in the 1990s, the consortium has racked up far higher graduation rates and college matriculation rates for its schools than New York’s traditional public schools.

The consortium prevailed even as New York became Exhibit A for the nation’s testing follies. New York adopted “Common Core-aligned” tests before the standards were completed, and introduced new tests almost every year — making it difficult to track student progress.

Testing excesses even prompted soul searching among leading accountability champions like Arne Duncan, who blogged while he was education secretary in 2014, “I believe testing issues today are sucking the oxygen out of the room in a lot of schools.”


New York is the latest state to rethink long-held education policies. At its July meeting, the state’s supervisory Board of Regents considered scrapping the subject-by-subject Regents exams — one of the oldest tests of its kind — as a high-school graduation requirement, and formed a commission to examine whether the tests improve “student achievement, graduation rates and college readiness.” Close to 20 percent of New York’s children sit out certain assessment tests at their parents’ discretion, one of the nation’s highest opt-out rates. MaryEllen Elia, the departing education commissioner, angered the Regents, who recently have been visiting consortium schools, by continuing to put schools with high opt-out rates on a watch list.

In 2015, New Hampshire won a waiver under a federal pilot program that opened the door to alternative assessment programs, and is introducing performance-based projects like New York’s that are designed almost entirely by teachers.

Developing high-quality alternative assessments is time consuming and costly, and the federal pilot program offers no funding. But educators committed to the model say it’s worth it. At the Brooklyn School for Collaborative Studies, a consortium school where nine in 10 students are members of minority groups and 70 percent are economically disadvantaged, one group of 11th graders completed a science assessment that involved a yearlong study of climate change and alternative energy sources. The students developed the physics- and earth science-related questions they wanted to answer and researched, wrote up and presented their findings. They also built wind turbines.

“It was the most rigorous academic work I have ever seen done in a high school setting,” wrote Lori Ungemah, a former New York City teacher who now teaches at a Community College.

One challenge is that project-based assessments would demand greater confidence in the ability of teachers and schools to judge their students’ progress, and would require striking a better balance between local autonomy and the kind of state and federal oversight that favors standardized curricula and testing. One way to encourage parents and citizens to trust local schools more might be to begin with networks of the schools most interested in project-based learning and let them serve as models, instead of trying to change the whole system all at once.

This column does not necessarily reflect the opinion of the editorial board or Bloomberg LP and its owners.

Posted by Angela Valenzuela at 2:05 PM