Trump is not welcome in El Paso, Texas. Where is he welcome, we might ask?

It's incredible to hear this evening that Trump may have plans to pay El Paso a Visit.  As yet, unconfirmed.

For him to even think that he would be welcome after everything he has said about Mexicans and immigrants on top of the systemic and systematic violence harped upon our people by his cruel and sadistic policies, matched by his chaotic and punishing style of leadership.

He more than anyone knows his own deep, dark heart and his twisted, evil purpose for existing.  So what's the point?  Why even suggest going to El Paso when you either sense or know by now that today is a day of celebration for the Alt-Right?

Note to friends: Please check out the previous piece I just posted.  Sadly, and disgustingly, these days are ones of celebration for the Alt-Right.  Such an evil spirit, this is.  Such a horrible intention.  And we all have to call it out because it seeks nothing more than to destroy and devour.

I can’t help but remember my grandmother who used to say "el diablo anda suelto" ('the devil is loose"), when bad things would happen and oppressive, evil spirits seemed to circulate in the air.

So, as I indicate in a previous blog post, we have to take white nationalism very seriously.  If you're in El Paso, consider donating blood.  If you are not, consider making a donation to the Southern  Poverty Law Center. The SPLC does the hard, risky work of tracking hate groups and teaching tolerance—a concept that comes from the Quakers who were abolitionists, opposing slavery.

Whites also need well-organized, comprehensive responses to this madness in their own communities as I have been suggesting.  I encourage you to support Ethnic Studies as an antidote to extremism, by providing all of our children and youth with history, language/vocabulary/discourse, concepts, and theoretical frameworks that are grounded in socially just ways of knowing and being in the world.

For now, and in solidarity with the beautiful and courageous people of El Paso, I propose that every city in America put signs outside their City Halls that express that Trump is not welcome there. Or some version of this.

“Unless he’s coming with some solid policy changes that directly address the available of high-capacity weapons — and not use the opportunity to propose more draconian immigration policy, I’m not interested in a Trump visit.”

I totally agree.  Anything short of this is yet another ploy.... 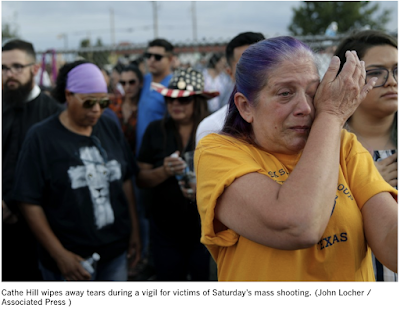 ‘We were safe until he started talking’: El Paso residents respond to President Trump

Watching President Trump step up to a White House podium Monday to assert that “hate has no place in America,” many people in this Texas border city were dumbfounded.
“We were safe until he started talking,” John Smith-Davis, 47, a retired Army veteran, said as he mourned with his friends at a memorial near the Walmart where a gunman opened fire Saturday. “He made us a target with his hateful rhetoric.”
Veronica Sanchez, a 23-year-old dental assistant, put it more succinctly: “He has said enough.”


El Paso, whose 680,000 people are mostly Latino and mostly Democrats, has long viewed Trump warily — and his most forceful statement since the massacre that has now claimed 22 lives there did little to change that.
"These barbaric slaughters are an assault upon our communities, an attack against our nation and a crime against all of humanity,” Trump said in a speech Monday about the killings here and another mass shooting a day later in Dayton, Ohio. “In one voice, our nation must condemn racism, bigotry, and white supremacy.”
That was little comfort to many El Paso residents, who focused instead on the ways that Trump has stoked the racism and xenophobia that appears to have motivated the killer and his decision to target Mexican immigrants.
El Paso Mayor Dee Margo said Monday that Trump was planning to visit the city on Wednesday, though by late in the day the White House had not officially confirmed that.
Many here said he would not be received warmly.
“From my perspective, he is not welcome here,” Democratic U.S. Rep. Veronica Escobar, whose district includes a wide swath of the city, said Monday in an interview on MSNBC. “Words have consequences. The president has made my community and my people the enemy. He has told the country that we are people to be feared, people to be hated.”
A string of officials in El Paso and across the nation have condemned Trump for his steady flow of racist rhetoric, including his repeated warnings about an immigrant “invasion”— the same term used in a manifesto posted to 8chan believed to be written by the shooter.
“We have a president right now who traffics in this hatred, who incites this violence, who calls Mexican immigrants rapists and criminals, calls asylum seekers animals and an infestation,” Beto O’Rourke, the Democratic presidential candidate who represented El Paso in Congress, said Sunday at a vigil.
O’Rourke also took aim at a suggestion Trump tweeted early Monday that Republicans and Democrats might now work together to enact stronger background checks for gun buyers, “perhaps marrying this legislation with desperately needed immigration reform.”
“Only a racist, driven by fear, could witness what took place this weekend — and instead of standing up to hatred, side with a mass murderer’s call to make our country more white,” O’Rourke wrote on Twitter. “We are so much better than this president.”
El Paso is an island of Democrats in a west Texas sea of Republicans. Hillary Clinton carried El Paso County in 2016 with 69% of the vote and Beto O’Rourke won with 86% for his congressional seat.
Some Republicans here said they appreciated Trump’s remarks and said it was too soon for the inevitable political arguments.
“Right now, I want to make sure I can show support by going to vigils and my wife can go to someone’s rosary and support those who lost loved ones,” said 72-year-old Bob Pena. “We have people yet to be put into the ground and people are looking to make political points out of it. Arguments can — and will — be made on both sides.”
Home to a University of Texas campus and the Army’s Ft. Bliss, El Paso sits just across the Mexican border from the far larger Ciudad Juarez, which has a population of 1.3 million.
As more Central American asylum seekers have arrived at the border in recent years, El Paso has become a major crossing point for immigrants entering the country illegally, second only to Texas’ Rio Grande Valley.
The Trump administration debuted its “zero tolerance” family separation policy in El Paso. More recently, the “Remain in Mexico” program, which requires asylum seekers to remain south of the border while their cases proceed in U.S. immigration court, was expanded from California to El Paso.
Claudia Ordaz Perez, an El Paso city councilwoman, said in a telephone interview she was trying not to politicize the tragedy. But it was difficult, she said, not to separate the massacre from the president’s escalating rhetoric on immigration and race.
“Of course, the rhetoric of hate from the shooter matches what we’re hearing on a national level and the president’s comments on this are just confusing,” she said.
Back at the Walmart on Monday, mourners delivered flowers, candles and signs to honor the dead.
Smith-Davis felt angry. Angry at the shooter. Angry at the gun lobby. Angry at Trump. He said Trump’s charge during his presidential campaign that Mexicans were drug dealers and rapists hurt the city, given hundreds of thousands cross the bridges every day from Juarez to El Paso to work.
“They’re just trying to make a living,” he said.
Sanchez, the dental assistant, who lives just across the border from El Paso in New Mexico, was especially upset by Trump’s talk of pairing gun and immigration legislation.
The killer, she pointed out, “wasn’t somebody who crossed the border. This is homegrown, somebody who came from the United States.”
The night before the massacre, Sanchez visited the Walmart for back-to-school shopping with her family. They had planned to return the next morning but saw reports of the attack and stayed home. She later read the shooter’s supposed manifesto railing against Latinos and immigrants like her parents, who crossed illegally from Mexico.
Back when Trump visited El Paso in February, Sanchez attended a competing rally for O’Rourke. She has Latino relatives in the area who voted for Trump but struggles now, after the mass shooting, to understand how they could remain committed to him.
Jaime Abeytia, who has lived in El Paso for 22 years, said that he did not imagine any Trump visit would be warmly received.
“His hypocrisy on hate is shockingly boundless,” he said.
“Unless he’s coming with some solid policy changes that directly address the available of high-capacity weapons — and not use the opportunity to propose more draconian immigration policy, I’m not interested in a Trump visit.”
Montero reported from El Paso and Jarvie from Atlanta. Times staff writer Molly Hennessy-Fiske in Houston contributed to this report.

Posted by Angela Valenzuela at 3:56 AM