The Australian wildfires have wiped out at least a billion animals.  This is apocalyptic, at a level that is hard to grasp even as it is deeply saddening and distressing.  Humanity and the planet are in an epic drama for survival, no less.  And where is the leadership?  Wanting to engage in never-ending wars?!  Focusing on separating families and putting children in cages?!
Give me a break.  We should end all wars, period—beginning with our war against children and families in our very own hemisphere.  Not only is destroying people's lives wrong, but the planet cannot afford this given that our biggest, existential threat is the clear climate emergency that we're in.  How is this not obvious?
We need to collectively get on task with addressing this emergency in all its dimensions and implications.  Our children, grandchildren, and the as yet unborn generations need us.  Our species survival is literally at stake.
What are our schools doing?  What are they teaching our children?  We should have public oversight on science curriculum to make sure that the truth of global warming and climate change are getting taught.  Let's do what the late Brazilian educator Paolo Freire suggested and put learning at the service of social justice.  The teaching opportunities at the local level are enormous.  We can all do something about this, particularly our children who can research such things and hold us as adults to account.  Children like Greta Thunberg and organizations Youth Strike 4 Climate are leading.  They can join the movement!
The kids are picking up on all of this regardless, but not in a way that helps them channel their grief into action.  If anything, these news are likely creating anxieties, "eco-anxiety," and aggravating forms and levels of mental illness. My own students have shared with me their own anxieties about what is happening to the planet and how it's depressing them.  What are our universities doing?  Who are our environmental policy experts in higher education?  And are they involved in actual policy at local, state, and national levels?  To what extent are they partnering with K-12 schools to create careers and pathways to certificates and degrees in Environmental Education?
What is the media doing?  Are these news not on the front page of every newspaper possible, in both print and online versions?  What are our cities and states doing?  We should be having community meetings, town halls, workshops, task forces, standing committees, and so on, everywhere.  How are we leading at the national level?  What's happening internationally, in this regard?
I don't see a whole lot going on right now and I'm fairly well informed.  It doesn't help to have leaders that don't "believe" in climate change as if there's anything there to really believe or not believe.  For most deniers or unbelievers, I sense that it's less that they're ignorant or unintelligent, and more that their personal and corporate interests are incompatible with a progressive, Earth-conscious vision for change—even though their own survival is at stake.
I shudder to think of the consequences that accrue based on the conversations that we're not having as a polity—particularly here in the First World when we are the planet's biggest polluters.  All of this is widely documented.
So as communities, we have to take—or take back—the agenda and discourse and have thoughtful, meaningful conversations and deliberative discourse coupled with action items and multi-faceted agendas for change.  We should hold our school boards and city officials accountable.  Neither should these entities work in silos, but work together for the common good.
This also means advancing comprehensive immigration reform and thusly eliminating the genocidal weapon of mass distraction that our politics and policies along the U.S.-Mexico border represent.  It all connects.
Doing nothing is a luxury that neither we, nor the planet, can afford.
-Angela Valenzuela
#GreenNewDeal #ExctinctionRebellion #FreeTheChildren #NoBorderWall 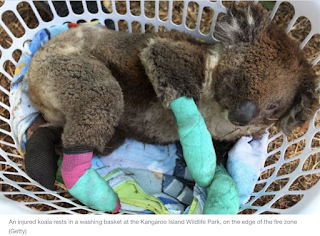 The devastation from the Australia wildfires has reportedly wiped out a billion animals, leading to what one scientist describes as an “extinction crisis”.
Professor Chris Dickman told Metro that the fires mean the total dead could rise in the coming weeks and months, as temperatures in the country start to rise again.
Worse still, Prof Dickman, a leading ecologist from the University of Sydney, believes some species may be wiped out for good due to a lack of wet refuges.

He told the paper: “Some of the species which are of greatest concern already have small populations and restricted geographical distributions…

Posted by Angela Valenzuela at 10:49 AM