Every American needs to take a history of Mexico class, by Dr. Gabriela Soto Laveaga

Excellent piece! Harvard University professor of the history of science and the study of Mexico, Dr. Gabriela Soto Laveaga, makes a compelling case for why every American should learn about the history of Mexico—presumably in K-12, as well as higher education. After all, our histories are intertwined. It would help us to have a broadened perspective in debates on immigration, race relations, the U.S.-Mexico border, and why so many of us advocate for bilingual education.

It's pretty incredible that one can earn a college degree and still know precious little about Mexico or Mexican history. Even well-educated people know little more than knowing how to order tequila or Mexican food in a restaurant, as if symbolically consuming Mexicans in this way makes one culturally competent.

These mindsets are transborder and hemispheric, too, with many Americans regarding Mexico and Latin America as little more than a playground for tourists designed to cater to mostly Anglo Americans, as well as Anglicized ones, who may be of any hue. This posture translates into the gobbling up choice property throughout Mexico, elevating gentrification to a global scale.

In places throughout Mexico like San Miguel de Allende in Guanajuato, one pays for property in U.S. dollars and at least half the city is Anglo. I have many friends from Guanajuato, including from San Miguel, and they can't afford to live there because Anglos have raised the cost of housing as a result of what they call, "colonización," the Spanish term for gentrification (and colonization) that makes it difficult for them to live there, impelling them to migrate to the U.S.

Once here, they're targeted by Immigration Customs Enforcement (ICE). Then they become the targets anew of gentrification as their apartments get bulldozed in East Austin, forcing them to vacate and move to the outer rings of the city and county, resulting in long-distance commutes to largely either construction, domestic, or service-sector jobs working in restaurants and hotels throughout our city. Many of these persons have advanced degrees in Mexico that unfortunately count for little here. We work precisely with families like these at our Saturday academy, Academia Cuauhtli.

Instead of being entitled and self-serving and teaching future generations to be so oriented, let's do take up Dr. Soto Laveaga's plea for greater understanding based on a long-overdue, clear reading of the history of Mexico and the Southwest.

As the Mexican American experience itself suggests, we shall acquire an enhanced understanding of social relations, policies, politics, culture, and how to be better neighbors with a community whose future is caught up with our own in ways big and small.

Every American needs to

take a history of Mexico class

Learning the history of Mexico can help Americans better understand themselves. 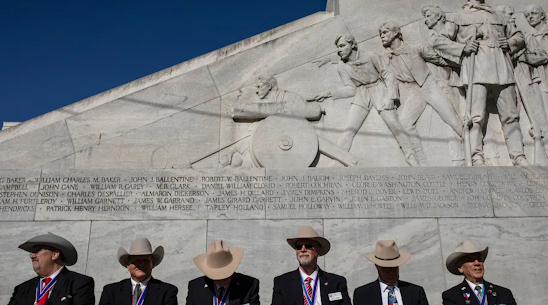 Members of the Sons of the Republic of Texas gather in front of the Alamo Cenotaph monument in San Antonio to commemorate the 184th anniversary of the Battle of the Alamo on March 6, 2020. (Tamir Kalifa for The Washington Post)
By Gabriela Laveaga | Washington Post | July 22, 2021 at 6:00 a.m. EDT

The recent backlash over a new book on the history of The Alamo is not about partisanship nor misapplied critical race theory. It is, however, about denying who we are as a nation. More than an erasure of historical fact it is another example of the ongoing and dangerous practice of cherry-picking parts of our past to fit prepackaged national myths. This is not a new practice nor is our society the only one to rewrite history to suit current political winds. Yet denying a serious, factual analysis of our past sabotages the ability to achieve a more just and equal society. If we start our national origins story with historical falsehoods, we will continue to repeat and expand these fictions to make the initial lie make sense.

One way to right this tendency is by studying the role of Mexico and Mexicans in the making of an American identity. It will not solve a concerted effort to refuse historical truths, but it may help us develop critical skills to identify the problems with teaching a single story of American history. Why Mexico? Among other reasons, Mexico lost more than 50 percent of its territory to the United States. Put starkly, much of our country was once Mexico. Analyzing the origins of this territorial gain places current debates about immigration, the border and even what languages can be taught in schools in a broader perspective.

Essayist and Nobel laureate Octavio Paz understood the value of this decades ago when he wrote, “by coming to know Mexico, North Americans can learn to understand an unacknowledged part of themselves.” That unacknowledged part is complicated. Let’s use just one example, the Mexican American War or the U.S. Invasion, as it is known in Mexico, to illustrate how this pivotal event could be taught in American classrooms to expand how we study the actions of our then still-fledgling nation.

While the history of The Alamo is not as consequential for Mexico, Mexican schoolchildren learn that when their country granted Anglo-Americans permission to settle in the sparsely populated territory of Tejas these settlers agreed to abide by the laws of Mexico and were encouraged to learn Spanish, convert to Catholicism, intermarry with Mexicans and, eventually, renounce slavery.

Instead, Anglo-Americans defied all of these expectations. They started by blowing past the cap on the number of Anglo-Americans who could settle in Mexico. That enabled them to outnumber Mexicans in its northern territory. The Americans then refused to follow the laws of the land; in response, Mexico sent troops to patrol its borders, understanding that a faction of Texans were intent on fostering secession from Mexico.

That is the backdrop for the 1836 siege of The Alamo: a country intent on quelling a rebellion of lawless foreigners who had overstayed their welcome in Mexico.

Yet the fate of Texas would not be decided on the battlefield but in Washington, D.C. In 1837 the U.S. recognized Texas as an independent state, fueling the anger of its southern neighbor. A few years later in 1844, James K. Polk ran his presidential campaign on the annexation of Texas, which many in Mexico still considered a rebel territory that was part of their nation.

Part of the dispute was where Texas claimed to draw its border, at the Nueces or the Rio Grande, which would give it an additional 150 miles of territory.

This geographic detail is important. Polk, determined to push for war, claimed that a border skirmish involving Mexican and American troops spilled “American blood on America’s soil.” But this claim was false; the battle happened in this disputed territory. A young congressman from Illinois, future president Abraham Lincoln, objecting to Polk’s lie, introduced the Spot Resolution of 1847, which laid out the evidence that the fight did not happen on American soil.

What if schoolchildren learned to examine Lincoln’s resolution and protests against what he thought was an unjust war? This broader context would show students that national stories are not tidy, they are messy and sometimes brimming with illegal, or at least problematic, acts. It would also teach students to interrogate presidential actions and claims, not simply accept them as fact.

In the past few months, diverse battles over what will be taught in our classrooms have a common denominator: pushback against a triumphalist narrative, which glorifies the actions of one group over another. Studying the Mexican American War can also teach us about the changing roles of race in our country. Specifically, how some ethnic groups that enjoy broad acceptance today were once reviled, such as, for example, the Irish.

One of the most symbolically powerful events of the war is mostly forgotten in the U.S. today. But Mexicans see the U.S. execution of a predominantly Irish regiment — the Saint Patrick’s Battalion — for treason, as a key event in the war.

In the 1840s, the Irish, fleeing famine, arrived destitute, hungry and, as political cartoons of the era show, in droves to the United States. Relegated to low-class jobs and living in crowded ethnic ghettos, the Irish were portrayed as undesirable immigrants with less-than-average intelligence, who were prone to criminality.

Yet when the call went out for an additional 50,000 troops to invade Mexico, immigrants — many of them Irish — answered the call with the hopes of achieving acceptance in the U.S. It did not take long, however, for many Irish to realize that they were fighting an unjust war started on false pretenses. As Catholics, they also sympathized with Mexicans who were appalled at the desecration of churches by the invading American army. Switching allegiances, a battalion of Irish deserted and fought on the Mexican side. While most were captured and hung for treason, today in Mexico you can find memorials to the Irish, considered heroes of the war. Not every Mexican schoolchild will know about The Alamo but they will all know about the Saint Patrick’s Battalion, when a group of unwanted immigrants rose up against a falsehood. In other words, the questions we ask of the past matter.

At the war’s end the U.S. gained the future states of California, Texas, Nevada, New Mexico, Arizona, Utah and portions of Oklahoma, Colorado, Wyoming and Montana from Mexico. To carry through with the belief that it was a God-given right to expand from “sea-to-shining sea” Mexicans were transformed into strangers on their own land. The new courts and laws helped take away the rights of Mexicans, setting a legal precedent for making them second class citizens, penalized for speaking Spanish or simply gathering in groups.

To be sure, mandating a history of Mexico class for a fuller understanding of our current society implies that we will have teachers trained and willing to teach a factual past. So far, we have mixed results in that area.

Despite these challenges, expanding our curriculum will enrich the understanding of the next generations of Americans. Borderlands scholar Gloria Anzaldua described the U.S.-Mexico border, a product of the Mexican American War, as an open wound, the marker of a collective and traumatic history that continues to have an impact on the present lives of communities and individuals. Problems, whether these be workers’ rights, migration, declining ground water at the border, economic development or drug trafficking affect both countries and cannot be solved with unilateral decisions. Unilateral histories also do not work.

The past few years have shown us that to remain purposefully ignorant of history is dangerous for democracy. If we move to erase uncomfortable pasts then we remain tethered to fictions.

Gabriela Soto Laveaga is professor of the history of science and the Antonio Madero Professor for the study of Mexico at Harvard University. She is working on a book on agricultural research and water in Sonora and the Punjab.  Twitter

Posted by Angela Valenzuela at 8:14 AM