Friends,
Combining a Youtube video and CNN report, these are must-hear and must-read, respectively, news that capture a talk delivered today by Matthew McConaughey at the White House. A disclaimer is that parts of it are graphic and are not appropriate for younger audiences or particularly sensitive individuals.
Matthew McConaughey is from beautiful Uvalde, Texas, and visited last week with his wife, Camila Alves. They also set up a Uvalde Relief Fund where donations can be made on their Just Keep Livin Relief Fund. They accept credit cards, Apply Pay, Google Pay, or Paypal.
McConaughey's testimony is persuasive, gripping, and passionate, speaking from his heart based on what he learned about the tragic loss of so many lives together with a fervent plea to "make their lives matter."
Do take a minute to read McConaughey's excellent June 6, 2022 op-ed in the Austin American-Statesman titled, "It’s time to act on gun responsibility" where he lays out a great path for policymakers to enact commonsense legislation. Like McConaughey, many of us agree that with so many senseless murders in Uvalde, Philadelphia, Tulsa, Tennessee, Charleston, Phoenix, and counting, now is the time for change.
Bless you, Matthew and Camila Alves McConaughey, for using your voices to express the deep sense of urgency and clear thinking that this moment requires.
-Angela Valenzuela 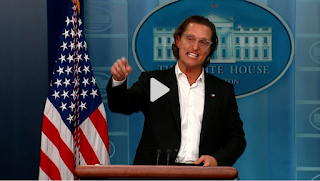 Matthew McConaughey tells the story of

those killed in Uvalde in emotional plea

for action on guns

Actor Matthew McConaughey delivered impassioned and at-times emotional remarks at the White House press briefing on Tuesday, telling the stories of those who died in the elementary school shooting in Uvalde, Texas, and urging more action on gun control.

McConaughey, a Uvalde native, said he and his wife, Camila Alves, spent most of the past week with the families of those who were killed in his hometown. He showed pictures of their artwork and brought to the briefing room the green Converse shoes that one girl wore every day that were used to identify her body after the shooting. She had drawn a heart on one of the shoes.

He said he needed to tell their stories to show how action needed to be taken to honor the lives of the 19 children and two teachers killed at Robb Elementary School last month.

He said there was now a “window of opportunity” to enact meaningful gun legislation reform and called for universal background checks, raising the minimum age for purchasing an AR-15 to 21, a waiting period for purchasing AR-15s and the implementation of red flag laws.

“These are reasonable, practical, tactical regulations to our nation, states, communities, schools and homes. Responsible gun owners are fed up with the Second Amendment being abused and hijacked by some deranged individuals. These regulations are not a step back – they’re a step forward for a civil society and, and the Second Amendment,” McConaughey said in a roughly 20-minute speech from the podium.

Posted by Angela Valenzuela at 10:34 PM