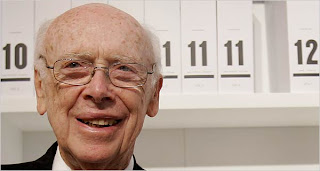 Kirsty Wigglesworth/Associated Press
James D. Watson, a discoverer of the structure of DNA.


In light of the earlier post, "All Brains Are the Same Color (see below)," this is pretty funny. Enjoy! -Angela

By JOHN SCHWARTZ
Now, this is awkward.

James D. Watson, the co-discoverer of the structure of DNA and winner of the Nobel prize, raised a storm recently when a British newspaper quoted him saying that black Africans are not as intelligent as whites. But his own brilliant DNA seems to blur the lines.

A new analysis of Dr. Watson’s genome shows that he has 16 times the number of genes considered to be of African origin than the average white European does — about the same amount of African DNA that would show up if one great-grandparent were African, said Kari Stefansson, the chief executive of deCODE Genetics of Iceland, which did the analysis.

“This came up as a bit of a surprise,” Dr. Stefansson said in an interview, “especially as a sequel to his utterly inappropriate comments about Africans.”

After the news of Dr. Watson’s genetic ancestry was published in The Times of London on Sunday, much of the British media played the news for a lark, with headlines like “Revealed: Scientist Who Sparked Racism Row Has Black Genes” and “DNA Pioneer James Watson Is Blacker Than He Thought.”

But the news, straddling the uncertain boundary of genetic science and society, is more than a Southern gothic drama of racial identity played out on the world stage.

“The irony is bigger, and broader, than his having made derogatory comments and having an ancestral relationship with the folks he insulted,” said Kathy Hudson, the founder and director of the Genetics and Public Policy Center in Washington. As people see what happens to Dr. Watson and others as they undergo what she called the “molecular Full Monty,” the inevitable surprises might “help people make the decision about whether they want their information for themselves, and to ask, Who will I share this with?”

Dr. Stefansson’s company is one of several marketing genome scans that promise to reveal anyone’s genetic propensities for disease, origins and more, for a price. Dr. Watson had already placed his own genome information online, as has another genetics pioneer, J. Craig Venter. Dr. Stefansson said he simply ran the data through his company’s analytical system.

Dr. Stefansson said that because his company had not produced the original data, “I am reluctant, personally, to make much of the analysis.” He added, however, that “on my face, it would elicit smiles.”

The controversy began with an article in The Times of London in October that quoted Dr. Watson, who was on a book tour, as saying that he was “inherently gloomy about the prospect of Africa” because “all our social policies are based on the fact that their intelligence is the same as ours — whereas all the testing says not really.”

According to the article, he said that “there are many people of color who are very talented,” and he hoped people were equal, but that “people who have to deal with black employees find this not true.”

A publicity agent for Dr. Watson, Fraser Seitel, said that his client had no comment on the most recent turn of events, but noted that Dr. Watson, who is 79, “regrets very much what was attributed to him” in the original article and has repeatedly apologized for the comments while also disavowing them.

“Dr. Watson has never believed that the color of someone’s skin, or where they come from, or any other human quality gives any indication whatsoever of a person’s intelligence or potential to succeed in life,” Mr. Seitel said. While not stating explicitly that his client was misquoted in the original article, Mr. Seitel said, “he doesn’t have a recollection of it.”

George M. Church, a professor of genetics at the Harvard Medical School and the director of the Center for Computational Genetics, said he questioned the accuracy of any of the current scanning and analytical services.

Professor Church predicted that as the science of genetics advanced, fuzzy categories like race would become less important because genetic characteristics would point to factors like disease at an individual level.

Meanwhile, he said: “There are still a lot of bigots in the world. Maybe showing these things are more nuanced than they’d like it to be makes them think about it.”