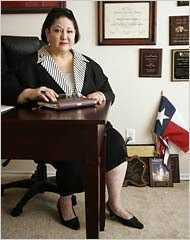 Erich Schlegel for The New York Times
Christine Comer, the former director of science in Texas.

I guess there is a thought police.... -Angela

By RALPH BLUMENTHAL
HOUSTON, Dec. 2 — After 27 years as a science teacher and 9 years as the Texas Education Agency’s director of science, Christine Castillo Comer said she did not think she had to remain “neutral” about teaching the theory of evolution.

But now Ms. Comer, 56, of Austin, is out of a job, after forwarding an e-mail message on a talk about evolution and creationism — “a subject on which the agency must remain neutral,” according to a dismissal letter last month that accused her of various instances of “misconduct and insubordination” and of siding against creationism and the doctrine that life is the product of “intelligent design.”

Her departure, which has stirred dismay among science professionals since it became public last week, is a prelude to an expected battle early next year over rewriting the state’s science education standards, which include the teaching of evolution.

“Our job,” Ms. Ratcliffe added, “is to enact laws and regulations that are passed by the Legislature or the State Board of Education and not to inject personal opinions and beliefs.”

Ms. Comer disputed that characterization in a series of interviews, her first extensive comments. She acknowledged forwarding to a local online community an e-mail message from the National Center for Science Education, a pro-evolution group, about a talk in Austin on Nov. 2 by Barbara Forrest, a professor of philosophy at Southeastern Louisiana University, a co-author of “Inside Creationism’s Trojan Horse” and an expert witness in the landmark 2005 case that ruled against the teaching of intelligent design in the Dover, Pa., schools.

“I don’t see how I took a position by F.Y.I.-ing on a lecture like I F.Y.I. on global warming or stem-cell research,” Ms. Comer said. “I send around all kinds of stuff, and I’m not accused of endorsing it.” But she said that as a career science educator, “I’m for good science,” and that when it came to teaching evolution, “I don’t think it’s any stretch of the imagination where I stand.”

Ms. Comer said state education officials seemed uneasy lately over the required evolution curriculum. It had always been part of her job to answer letter-writers inquiring about evolution instruction, she said, and she always replied that the State Board of Education supported the teaching of evolution in Texas schools.

But several months ago, in response to an inquiry letter, Ms. Comer said she was instructed to strike her usual statement about the board’s support for teaching evolution and to quote instead the exact language of the high school biology standards as formulated for the Texas Essential Knowledge and Skills test.

“The student knows the theory of biological evolution,” the standards read, and is expected to “identify evidence of change in species using fossils, DNA sequences, anatomical similarities, physiological similarities and embryology,” as well as to “illustrate the results of natural selection in speciation, diversity, phylogeny, adaptation, behavior and extinction.”

The standards, adopted in 1998, are due for a 10-year review and possible revision after the 15-member elected State Board of Education meets in February, with particular ramifications for the multibillion-dollar textbook industry. The chairman of the panel, Dr. Don McLeroy, a dentist and Sunday School teacher at Grace Bible Church in College Station, has lectured favorably in the past about intelligent design.

Ms. Comer said that barely an hour after forwarding the e-mail message about Dr. Forrest’s talk, she was called in and informed that Lizzette Reynolds, deputy commissioner for statewide policy and programs, had seen a copy and complained, calling it “an offense that calls for termination.” Ms. Comer said she had no idea how Ms. Reynolds, a former federal education official who served as an adviser to George W. Bush when he was governor of Texas, had seen the message so quickly, and remembered thinking, “What is this, the thought police or what?”

Under pressure, Ms. Comer said, she sent out a retraction, advising recipients to disregard the message.

But Ms. Comer, the divorced mother of a grown son and daughter and the supporter of an ailing father, was still forced out of the $60,000-a-year job, she said, submitting her resignation on Nov. 7. She and the agency said nothing about her departure until The Austin American-Statesman obtained a copy of the “proposed disciplinary action” and her resignation letter.

Ms. Comer said that Tom Shindell, director for organizational development, had told her to resign or be terminated for a series of unauthorized presentations at professional meetings and other reported transgressions.

“Tom,” Ms. Comer said she asked, “am I getting fired over evolution?”