Dropout-Prevention Program Sees to The Basics of Life 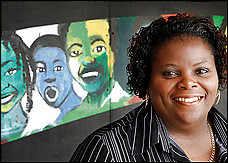 
Word was getting around about the new problem solver on campus. So the mother tracked her down one recent day in a makeshift office on the second floor of a Southeast Washington public school.

"I don't know if you are the right person to come to," the mother said, "but I have this situation. I haven't eaten in the last day and a half so that my children would have enough to eat."

» Links to this article
Andrill Harris, dropout prevention coordinator at the Patricia R. Harris Education Center, knew what to do. She set up a food-bank delivery. For another parent in a tight spot, Harris found subsidized housing. The two families had a total of five children at the school. All, with help from Harris, were spared at least some of the stress that makes it hard for some inner-city students to concentrate on reading and math, hard even to stay in school.

In the struggle to improve schools in the poorest neighborhoods, experts say no problem is more challenging than the high dropout rate. Some educators have raised test scores. Others have repaired leaking roofs and gotten new computers. But the latest estimates this year indicate that only 58 percent of D.C. public school students graduate on time with a high school diploma.

Communities in Schools, the nonprofit organization that employs Harris, has gained a national reputation for reducing dropout rates since its founding in 1977. Based in Alexandria, the organization has nearly 200 affiliates in 27 states, reaching more than a million students in 3,400 schools. In the District, it operates in eight schools.

The organization confronts the dropout issue at its main source: impoverished families who need jobs, health care, housing, food, reading tutors and often simply a friendly ear. It sounds simple and obvious, but in many ways it is an innovation. School systems traditionally have depended on teachers and principals to connect with bored or troubled students and try to persuade them to stay. Few outside groups offer help to beleaguered school administrators.

"Many times, students don't have a caring adult in their lives at school," said Daniel J. Cardinali, president of Communities in Schools.

To be sure, other factors can lead students to drop out. Some adolescents or teenagers dislike sitting in classrooms and want to get out into the world as soon as possible. Some feel lost in humongous high schools or turned off by boring lessons.

Many educators in the Washington area and beyond are starting to recover from years of denial about dropouts. Often, statistics have buried the magnitude of the problem. For years, many school systems have reported dropout rates of 2 or 3 percent, using a formula for what is known as the event rate, or the percentage of students who leave school each year. Nationally, the event rate is 4.7 percent. It ranges from 6 to 10 percent in low-income communities.

But scholars have persuaded the National Governors Association to embrace a statistic known as the cohort rate, or the percentage of ninth-graders who graduate within four years. That, experts say, is a more depressing but also more realistic figure. Nationally, the cohort graduation rate is about 70 percent, declining to 50 percent in some urban areas. An analysis of data on the nation's 50 largest school systems, published by Education Week in June, shows that the graduation rate in Prince George's County is 67 percent and that Anne Arundel County's is 75 percent. Montgomery County and Fairfax County were virtually tied at about 80 percent.

In a new book, "The Last Dropout: Stop the Epidemic!," Communities in Schools co-founder Bill Milliken says he does not have enough data to calculate a cohort graduation rate for students helped by his program. But he reports that his event rate appears to be about 3.5 percent, roughly half of what low-income schools usually report.

Harris, 40, joined Communities in Schools in August after many years as a social worker in the District and Prince George's. She works on a laptop computer at a table in a small special-education classroom. She has no school phone extension yet, so she uses her cellphone to reach out to organizations that might help families at two Southeast schools: Patricia R. Harris, which serves students from pre-kindergarten through eighth grade, and Terrell Elementary, which serves students through sixth grade.

Communities in Schools focuses on what it calls the five basics: providing mentors, good health, safe places to grow and learn, opportunities to give back to the community and marketable skills. Harris's bible is a pocket-size volume, "The Emergency Food, Shelter and Health Care Directory," published by the InterFaith Conference of Metropolitan Washington.

That is just a start. Harris keeps a list of community groups and businesses that have offered help. She uses even the smallest gifts to build strong family relationships with her schools. Having received a donation of 100 children's books, she is organizing a "read-in" to give away books "with moms and dads in the morning, coffee and doughnuts," she said. She added: "We might have a reading night with the parents. Another option is having a book club."

Jeffrey Grant, principal of Patricia R. Harris, said the connection with Communities in Schools is "a partnership made in heaven."

All good principals, he said, try to do what Communities in Schools does: contact outside organizations that might help enrich student lives. Every D.C. school has a list of volunteer partner organizations, but the administrative and academic burdens on principals leave little time for the e-mails and phone calls needed to make the partnerships work. With Harris working for him, Grant said, his partners -- often reluctant to intrude without an invitation -- hear what he needs, when they can come and what they should bring.

Cardinali said Communities in Schools is supported by the Bill & Melinda Gates Foundation, federal grants and various other sources. The organization is working with four D.C. high schools -- Anacostia, Ballou, Eastern and H.D. Woodson -- but also sends coordinators to elementary schools because that is where problems begin. "We have done a bunch of research on the risk factors that correlated strongly with dropouts going back to the third grade, so we look for tutors, mentors and after-school programming," Cardinali said.

So far, smaller high schools, or small academies within larger high schools, have had the most success in increasing graduation rates. For example, 88 small high schools have opened in New York City since 2002 under the New Century High Schools initiative. They report that 78 percent of their students are graduating after four years, much higher than the citywide average. Some small charter high schools in the District report similar success, although scholars caution that the New Century and charter schools might benefit from attracting more motivated students, who are less likely to drop out wherever they go.

Maryland State Superintendent of Schools Nancy S. Grasmick said groups such as Communities in Schools provide promising short-term solutions. But she said she looks forward to long-term changes, including universal access to pre-kindergarten, that could reduce the dropout rate by raising achievement for students from the poorest families.

Harris said her work has convinced her that families want to take control of their lives and just need guidance on how to do that. The mother who sought help finding food, Harris said, first became aware of possible aid at a PTA meeting during which Harris led a discussion of what could be done to help neighbors. The mother offered to help on Thanksgiving. Days later, she asked for help herself.

"Everybody has circumstances," Harris said. "It is not necessarily something they have done intentionally to put themselves in that situation. It is not always your responsibility to know what to do at that time and how to fix the situation. So that's why you have others in the community who will help and support you."

Staff writer Jay Mathews sits on the board of directors of Editorial Projects in Education, the nonprofit publisher of Education Week.
Posted by Angela Valenzuela at 4:13 PM