The gerrymandered Latino vote is trending, but slowly as conveyed below in this informative Texas Monthly piece by R.G. Ratcliffe.

While Hispanic voting was at its highest level ever in 2016, it was an incremental increase to 19 percent of the total turnout, up from 17 percent in 2012. The long-term demographic trends favor Hispanic voting strength over white voters, but at last year’s level of increase, it would take about two more presidential election cycles to close the gap between Republican and Democratic votes.

Dr. Rogelio Sáenz, dean of the College of Public Policy at the University of Texas at San Antonio, had already researched and explained all of these things in a December 31, 2016 piece published in the San Antonio Express-News titled, "White births, migration explain why Texas remains a red state" where he also mentions that whites face fewer blockages to their vote relative to Latinos and minorities, generally.

Dr. Saenz also calls out Republicans' deliberate attempts to limit the political power of both Latinos and African Americans, such as through the passage of voter ID laws and gerrymandering, as well as through the "slashing of public education funding in public schools that are majority non-white and mass incarceration, which has taken away the vote of many persons of color."

Our policy and legal challenges are significant, but with good research and information such as that which is provided in these and other publications, provide excellent guideposts for the future. 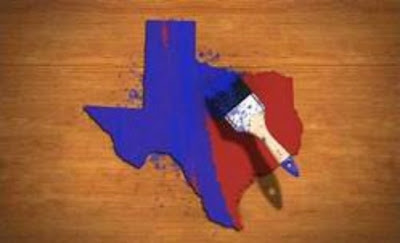 By R.G. RATCLIFFE
FEB 21, 2017
For the past twenty years, Texas Democrats have entered every election saying demographics are on their side. They’ve been hoping that the state’s burgeoning Hispanic population will carry the party back into power. If the 2016 election loss of Democrat Hillary Clinton in Texas proves anything, it is that the state’s Latino vote is less the Sleeping Giant than a growing adolescent who has not yet come of age. And probably won’t anytime soon.

Last fall I reported that there was a surge in Texas of about 530,000 Latinos who had registered to vote amid the anti-Mexican, build-a-wall rhetoric of Republican presidential candidate Donald Trump. That registration increase apparently played a major role in the spike in Latino voters who showed up to vote in Texas last November. About 395,000 more Latino voters went to the polls than did in the 2012 presidential election. But it was still far too little to make a difference for Democratic candidates statewide. That trend—increasing numbers of Latino voters, but not enough to help Democrats win consistently in Texas—seems likely to continue for the next few elections cycles.

The caveat to that is whether President Trump’s crackdown on undocumented immigrants might motivate a group of voters who usually don’t vote, no matter the ethnicity: young voters. A Pew Research Center report estimated that 32 percent of the 2016 eligible Hispanic voters in Texas were between the ages of 18 and 29. Because the great migration of undocumented immigrants from Mexico to Texas occurred before the year 2000, that means many of these young voters were born here and are citizens even if their parents or older siblings are undocumented immigrants fearful of deportation. Trump’s hard-line immigration policies could prompt these youthful voters to flock to the polls next year.

Short of that kind of sea change, Texas Republicans can feel confident of holding the advantage in statewide elections for years to come. Non-Hispanic whites may constitute just 43 percent of the state’s population, but in 2016 they represented more than 65 percent of all the votes cast, according to state voting results provided to me by the Legislative Council. And Anglos gave about 69 percent of their votes to Trump.

To get an idea of how much Hispanic voting will have to grow to offset the white vote, consider this: If the Spanish surname votes of Bexar County, Corpus Christi and all the counties of South Texas and along the Rio Grande to El Paso were added together, they would account for almost half of all the Spanish surname ballots cast in 2016. However, all those ballots together are still outnumbered by the votes cast by whites just in three heavily Republican counties combined: Collin, Denton, and Montgomery.

While Hispanic voting was at its highest level ever in 2016, it was an incremental increase to 19 percent of the total turnout, up from 17 percent in 2012. The long-term demographic trends favor Hispanic voting strength over white voters, but at last year’s level of increase, it would take about two more presidential election cycles to close the gap between Republican and Democratic votes. But elections for governor and most other statewide offices occur in off years, and the gap is even wider. The number of Hispanic votes cast in the past two off-year elections was almost stagnant, increasing only by 14,500 from 2010 to 2014. The Republican advantage in the 2014 off-year elections was close to a million votes.

One thing that might make a difference is a major voter registration drive. The state’s Hispanic population is estimated at 10.4 million, but there were only 4.8 million Hispanics eligible to vote last year, according to Pew estimates. After children too young too vote and non-citizens are winnowed out of the population, Hispanics only make only up 28 percent of the eligible voters. The Texas Secretary of State’s office reported that there were about 3.5 million Spanish surname registered voters in 2016, so the 1.7 million turnout accounted for close to half of all the registered Hispanic voters. But that means more than a million eligible Hispanic voters are still not registered to vote.

Barreto, who has been an expert witness for the Texas Democratic Party in redistricting cases, said the state party also needs to encourage more minority candidates to run for statewide office—even if the prospects of winning are not good. “They won’t all win. A lot of them will run and lose. That’s how you turn a state. You run and lose. That will bring more people into the system. … If you don’t think the system cares about you, there’s almost nothing we can do to get you to vote.

“They need to be encouraging candidates who look like the future of their party to be running for every single office. That will eventually lead to a belief among the voters that the party actually cares about them. If you look up and every year you just have more white candidates running, it creates an idea that the party doesn’t care much about you.”

In fact, the last two Democratic Party nominees for governor were white—former Houston Mayor Bill White in 2010 and former state Senator Wendy Davis of Fort Worth. Barreto said Davis never fully connected with Latino voters and in some San Antonio precincts that are heavily Hispanic, Davis was out voted by Democratic Lieutenant Governor candidate Leticia Van de Putte, a Latina.

A test that may be brewing involves Republican U.S. Sen. Ted Cruz, who will stand for re-election next year. Cruz appears vulnerable after his failed 2016 presidential campaign and reluctance to endorse Trump for president. He’s mostly vulnerable to a Republican primary challenge. However, he likely will also face a challenge in the general election from either Joaquin Castro of San Antonio or Beto O’Rourke, with a base in heavily Hispanic El Paso. Both are current members of the U.S. House. Cruz is of Cuban heritage, while Castro is Mexican-American.

The greater likelihood is that the growing Hispanic vote will affect local elections first, as they did in Houston last year.

Harris County had the biggest spike in Hispanic voter turnout in 2016. The county saw 73,000 more Hispanic voters than in 2012, and the percentage of the vote grew from 16 percent to almost 20 percent. (For comparison, the number of Spanish surname voters in Bexar County increased by 45,500 over 2012; Dallas County, 33,000 votes; and Travis, about 17,000; even very Republican Tarrant county had an increase of 20,000 Spanish surname voters.)

University of Houston political scientist Richard Murray said the impact of Hispanic voting in Harris County could be seen in how poorly Trump performed there. He received 40,000 fewer votes than 2012 GOP presidential nominee Mitt Romney, while Clinton gathered 120,000 more votes in the county than Obama. “Trump’s weakness with urban Hispanics hurt the Republican ticket badly as one can see from precinct level data from Harris County,” Murray said. “That wiped out all down ballot Republicans, despite the fact that the most reliable Democratic voters in Harris County, African Americans, turned out at only about 90 percent of their 2012 vote.”

OK, now, every time journalists write about the growing Hispanic vote and the Democratic Party, the instant response is that not all Latinos vote Democratic. And that’s very true. Latinos who live in predominantly Anglo neighborhoods tend to vote like their neighbors. Wealthier Hispanics are more likely to vote Republican. But Latinos predominantly vote Democratic. How much so is often a point of dispute, and one reason is that exit polls get it wrong.

The first time I really encountered the exit poll problem was 1998, when George W. Bush won re-election as governor, claiming an exit poll showed him receiving half the Hispanic vote. The television networks’ Voter News Service said Bush had won 49 percent of the Texas Hispanic vote. However, exit polls by the William Velasquez Institute set Bush’s margin at 39 percent. In effort to settle the question, I used the Texas Legislative Council’s redistricting computer to look at 180,000 votes cast in 426 urban precincts that had a Hispanic voting age population of more than 70 percent. The result was that Bush received 39 percent of the vote. The big difference, my study was based on tens of thousands of actual votes while the television network’s exit poll was based on interviews with a mere 201 Hispanic voters.

Barreto told me the big problem with using exit polls to tell you much of anything about Hispanic voting in Texas is that the exit surveys usually are set up in swing precincts because the networks are more interested in calling a race than giving an accurate demographic picture of an election. Barreto said in 2014 there were no exit polls south of San Antonio and the surveys were only done in English.

That prompted me to take another look at the 2014 exit polls that showed Governor Greg Abbott receiving 44 percent of the Latino vote over Davis, and U.S. Senator John Cornyn capturing 48 percent. Looking at mostly Hispanic counties of South Texas, it appears that Abbott’s real Latino vote probably was somewhere between 25 and 35 percent. (If anyone knows of a more accurate precinct level study, please let me know.)

A pair of political scientist, Francisco Pedraza and Bryan Wilcox-Archuleta, in a recent Washington Post article challenged the notion that Trump received 34 percent of the Latino vote in Texas. In a study of 4,372 precincts across Texas covering 75 percent of the state’s Hispanic population, they determined that Clinton had won 77 percent of the Hispanic vote to Trump’s 18 percent—very different from the exit polls that showed the results at 61/34 percent.

(For those who want to challenge my analysis or explore further, click here for the 2012/2016 spreadsheet. SSTO means Spanish Surname Turnout. TO is Total turnout of all voters. The Spanish surnames are compiled by the Secretary of State’s office from a list of common surnames in the United States. And, of course, it is possible for someone to be Hispanic and not have a Spanish surname.)

The bottom line is that Democrats will continue to benefit disproportionately from increases in Hispanic turnout, but barring a major change in current trends, it won’t be enough to turn Texas blue for years into the future.
Posted by Angela Valenzuela at 9:24 PM