It's time to read this "most-read article in New York Magazine’s history" piece on climate change based on author David Wallace-Wells' interviews with climate experts who without exception agree that our atmosphere and glaciers are so packed with methane and carbons, respectively, that "no plausible program of emissions reductions alone can prevent climate disaster."

This doesn't mean we should give up on carbon and methane reductions (the latter especially occurs through fracking technologies), but that we're far along in the process with huge swaths of Earth becoming uninhabitable within this century.

I agree that rather than widespread fear and fatalism over the prospects of climate change, the larger problem is that folks aren't scared enough to make this a priority.

Let's not fool ourselves and believe that we have effectively "exercised dominion" over the natural world no matter how much we have ravaged it, but consider, as Wallace-Wells says,


the possibility that we have only provoked it, engineering first in ignorance and then in denial a climate system that will now go to war with us for many centuries, perhaps until it destroys us. That is what Wallace Smith Broecker, the avuncular oceanographer who coined the term "global warming,” means when he calls the planet an “angry beast.”“The climate system is an angry beast and we are poking it with sticks.” You could also go with “war machine.” Each day we arm it more.

This information should minimally find its way into state curricula.  And we also need to work with and support environmental groups that are working on climate issues.  We should join such advocacy organizations or even re-purpose those that we belong to to address such issues.

See other related posts to this blog:
The point of this is not to scare but to motivate positive action, especially in the advocacy and policy arena.

We owe this to ourselves, our children, grandchildren, and the unborn generations. 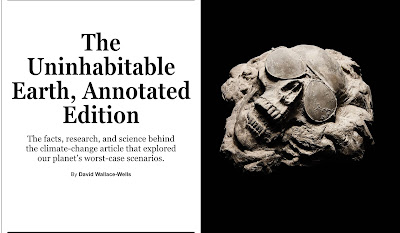 
We published “The Uninhabitable Earth” on Sunday night, and the response since has been extraordinary — both in volume (it is already the most-read article in New York Magazine’s history) and in kind. Within hours, the article spawned a fleet of commentary across newspapers, magazines, blogs, and Twitter, much of which came from climate scientists and the journalists who cover them.
Some of this conversation has been about the factual basis for various claims that appear in the article. To address those questions, and to give all readers more context for how the article was reported and what further reading is available, we are publishing here a version of the article filled with research annotations. They include quotations from scientists I spoke with throughout the reporting process; citations to scientific papers, articles, and books I drew from; additional research provided by my colleague Julia Mead; and context surrounding some of the more contested claims. Since the article was published, we have made four corrections and adjustments, which are noted in the annotations (as well as at the end of the original version). They are all minor, and none affects the central project of the story: to apply the best science we have today to the median and high-end “business-as-usual” warming projections produced by the U.N.’s “gold standard” Intergovernmental Panel on Climate Change.
But the debate this article has kicked up is less about specific facts than the article’s overarching conceit. Is it helpful, or journalistically ethical, to explore the worst-case scenarios of climate change, however unlikely they are? How much should a writer contextualize scary possibilities with information about how probable those outcomes are, however speculative those probabilities may be? What are the risks of terrifying or depressing readers so much they disengage from the issue, and what should a journalist make of those risks?
I hope, in the annotations and commentary below, I have added some context. But I also believe very firmly in the set of propositions that animated the project from the start: that the public does not appreciate the scale of climate risk; that this is in part because we have not spent enough time contemplating the scarier half of the distribution curve of possibilities, especially its brutal long tail, or the risks beyond sea-level rise; that there is journalistic and public-interest value in spreading the news from the scientific community, no matter how unnerving it may be; and that, when it comes to the challenge of climate change, public complacency is a far, far bigger problem than widespread fatalism — that many, many more people are not scared enough than are already “too scared.” In fact, I don’t even understand what “too scared” would mean. The science says climate change threatens nearly every aspect of human life on this planet, and that inaction will hasten the problems. In that context, I don’t think it’s a slur to call an article, or its writer, alarmist. I’ll accept that characterization. We should be alarmed.

Peering beyond scientific reticence.
It is, I promise, worse than you think. If your anxiety about global warming is dominated by fears of sea-level rise, you are barely scratching the surface of what terrors are possible, even within the lifetime of a teenager today. And yet the swelling seas — and the cities they will drown — have so dominated the picture of global warming, and so overwhelmed our capacity for climate panic, that they have occluded our perception of other threats, many much closer at hand. Rising oceans are bad, in fact very bad; but fleeing the coastline will not be enough.

Indeed, absent a significant adjustment to how billions of humans conduct their lives, parts of the Earth will likely become close to uninhabitable, and other parts horrifically inhospitable, as soon as the end of this century.

Posted by Angela Valenzuela at 9:33 AM