Terrible news.  Adding a citizenship question to the U.S. Census is a clear strategy for chilling immigrant participation and promises to result in an undercount which has enormous implications for resources and representation.  This is a Trumpian racist and xenophobic attack on the immigrant community, not unlike the United States Citizenship and Immigration Services (USCIS) dropping specific language related to our being a "nation of immigrants."  In my world, this is called institutionalized oppression. People don't have to be open bigoted if the government reflects their will where the president himself is playing to his base. 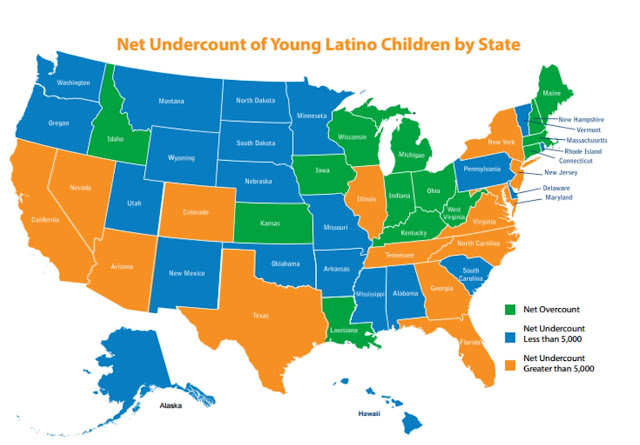 For Immediate Release     Contact: Michael Earls at 202-494-8555 or press@americasvoice.org
March 28, 2018
Immigrants and Allies Weigh in on the Devastating Consequences of Chilling Participation in the Census
Washington, DC – In response to the Trump Administration’s announcement that a citizenship question will be added to the Census, immigrants and their allies have responded forcefully. They argue that asking about citizenship status will drive down participation and undermine the constitutional aim of the Census to count all residents in the United States. Of course, this potential undercounting is deliberate and part of the Trump and GOP’s larger attempts to undermine the political power and allocation of resources to diverse communities across America.
According to Migration Policy Institute, as of 2016 there were more than 43.7 million immigrants living in the United States, constituting 13.5% of the total U.S. population of 323.1 million. Of these, Pew Research estimates that 11 million are unauthorized immigrants. According to a Center for American Progress study, more than 8 million U.S. citizens nationwide have at least one unauthorized family member living in their household. This includes more than 5.9 million citizen children who live with at least one undocumented family member.
Anything that chills participation from up to one-sixth of the population is surely going to affect the accuracy of the overall effort.
Many immigrants are highlighting why they wouldn’t want to share any information with the Trump Administration:
Gladis Perez, a native of Guatemala who became a citizen five years ago tells Miriam Jordan in a New York Times story titled, “If Census Asks About Citizenship, Some Already Have an Answer: No Comment: “I wouldn’t answer any questions before … I wouldn’t even open the door. If I were still undocumented, I would avoid this survey at any cost.”
Carmen Queveda, an undocumented babysitter and housekeeper in Southern California who has a 14-year old, U.S. citizen son told Jordan: “I would never answer, because I don’t have papers … Obviously, I am afraid. I have a son.”
Cesar Morio, an undocumented construction worker from Mexico who lives in Southern Californiatold Jordan: “I know that no parent in my neighborhood is going to be opening the door for anyone doing a survey.”
An unnamed immigrant woman in California interviewed by Noticiero Univision: “It would make me really nervous because you know how things are with immigration nowadays”. The reporter states that if people don’t complete the Census out of fear, California would stand to lose millions of dollars in federal funds. To this the woman adds: “I would not complete it” if the citizenship question is included.
In another Univision story on the American Community Survey conducted last year by the Census, one of the persons interviewed in Spanish stated that “the possibility that the Census could provide my information to the national security and that immigration could find me and arrest me for lack of documentation terrorizes me.”
Even before new Census announcement, immigrants have been fearful of sharing information with Trump Administration. As HuffPost’s Sam Levine reported, Arturo Vargas, the Executive Director of NALEO, “told HuffPost in January that officials already had trouble getting people to respond and convincing them the census would not share their information with other agencies.”
The HuffPost story links to an internal Census Bureau memo from September in which “census field researchers reported that they were seeing unusually high concerns about confidentiality from respondents, particularly those in immigrant communities. Many people were falsifying the information they provided to researchers out of concern for their own immigration status or that of someone they knew.”
It is worth noting that in the aftermath of Hurricanes Harvey and Irma in Texas and Florida last year, many immigrants expressed fear about engaging with government-directed relief efforts, fearful that interacting with the government could exposed them to deportation.
Meanwhile, leading experts and advocates are explaining the implications of a potential Census undercount:
Angelica Salas, Executive Director of the Coalition for Humane Immigrant Rights of Los Angeles (CHIRLA): “Their goal is to try to make invisible our immigrant community in the Census and to create a situation in which civic engagement action, to be counted, becomes risky … But we are going to make sure that our community understands that they count for the United States and should participate. We are going to fight it.”
Erika Reyna, who is helping to coordinate Census efforts in Hidalgo County in southern Texas: “We know this question is going to have a detrimental impact on our efforts and is going to make people wary of responding … An undercount will mean fewer resources in an area that is high-need and growing.”
Jerry Gonzalez, Executive Director of the Georgia Association of Latino Elected Officials (GALEO):“We have many mixed-status families, and given this administration’s record on being anti-immigrant and Latino, the question will sow fear and confusion.”
Kristen Clarke, President and Executive Director of the Lawyers’ Committee for Civil Rights Under Law: “This is a clear attempt to politicize the process by discouraging minority communities and immigrant communities from participating in the count … This is an arbitrary and untested decision that all but guarantees that the Census will not produce a full and accurate count of the population as the constitution requires.”
Bob Ross, President of the NAACP Prince George’s County (MD) Branch and a named plaintiff in a new NAACP lawsuit against the Census Bureau: “When the Census Bureau undercounts my community, we lose political power, and fewer of our federal tax dollars end up coming home to fix our roads, run our schools, and fund our federal programs.”
Follow Frank Sharry and America’s Voice on Twitter: @FrankSharry and @AmericasVoice
America's Voice – Harnessing the power of American voices and American values to win common sense immigration reform
www.americasvoice.org
###

Posted by Angela Valenzuela at 9:39 AM