The Trump Presidency Is Over: Now He Needs to Resign

Must-read scathing critique by Peter Wehner of the Trump presidency in The Atlantic.  At this point, and good hygiene and social distancing notwithstanding, if the Coronavirus get us or our loved ones due to his reckless endangerment of Americans, we're "done," too.  As the death toll registers at 80, blood is already on his hands. Devastating quote:

Taken together, this is a massive failure in leadership that stems from a massive defect in character. Trump is such a habitual liar that he is incapable of being honest, even when being honest would serve his interests.

He is indeed shrinking before our very eyes and needs to resign immediately. His enablers, too.

Thanks to Emma Mancha-Sumners for sharing.

The Trump Presidency Is Over

It has taken a good deal longer than it should have, but Americans have now seen the con man behind the curtain.
MARCH 13, 2020 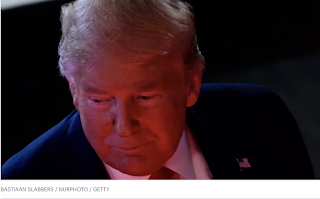 Editor's Note: The Atlantic is making vital coverage of the coronavirus available to all readers. Find the collection here.

When, in January 2016, I wrote that despite being a lifelong Republican who worked in the previous three GOP administrations, I would never vote for Donald Trump, even though his administration would align much more with my policy views than a Hillary Clinton presidency would, a lot of my Republican friends were befuddled. How could I not vote for a person who checked far more of my policy boxes than his opponent?
What I explained then, and what I have said many times since, is that Trump is fundamentally unfit—intellectually, morally, temperamentally, and psychologically—for office. For me, that is the paramount consideration in electing a president, in part because at some point it’s reasonable to expect that a president will face an unexpected crisis—and at that point, the president’s judgment and discernment, his character and leadership ability, will really matter.
David Frum: The worst outcome
“Mr. Trump has no desire to acquaint himself with most issues, let alone master them” is how I put it four years ago. “No major presidential candidate has ever been quite as disdainful of knowledge, as indifferent to facts, as untroubled by his benightedness.” I added this:
Mr. Trump’s virulent combination of ignorance, emotional instability, demagogy, solipsism and vindictiveness would do more than result in a failed presidency; it could very well lead to national catastrophe. The prospect of Donald Trump as commander in chief should send a chill down the spine of every American.
It took until the second half of Trump’s first term, but the crisis has arrived in the form of the coronavirus pandemic, and it’s hard to name a president who has been as overwhelmed by a crisis as the coronavirus has overwhelmed Donald Trump.

To be sure, the president isn’t responsible for either the coronavirus or the disease it causes, COVID-19, and he couldn’t have stopped it from hitting our shores even if he had done everything right. Nor is it the case that the president hasn’t done anything right; in fact, his decision to implement a travel ban on China was prudent. And any narrative that attempts to pin all of the blame on Trump for the coronavirus is simply unfair. The temptation among the president’s critics to use the pandemic to get back at Trump for every bad thing he’s done should be resisted, and schadenfreude is never a good look.
That said, the president and his administration are responsible for grave, costly errors, most especially the epic manufacturing failures in diagnostic testing, the decision to test too few people, the delay in expanding testing to labs outside the Centers for Disease Control and Prevention, and problems in the supply chain. These mistakes have left us blind and badly behind the curve, and, for a few crucial weeks, they created a false sense of security. What we now know is that the coronavirus silently spread for several weeks, without us being aware of it and while we were doing nothing to stop it. Containment and mitigation efforts could have significantly slowed its spread at an early, critical point, but we frittered away that opportunity.
“They’ve simply lost time they can’t make up. You can’t get back six weeks of blindness,” Jeremy Konyndyk, who helped oversee the international response to Ebola during the Obama administration and is a senior policy fellow at the Center for Global Development, told The Washington Post. “To the extent that there’s someone to blame here, the blame is on poor, chaotic management from the White House and failure to acknowledge the big picture.”
Ben Rhodes: How Trump designed his White House to fail
Earlier this week, Anthony Fauci, the widely respected director of the National Institute of Allergy and Infectious Diseases whose reputation for honesty and integrity has been only enhanced during this crisis, admitted in congressional testimony that the United States is still not providing adequate testing for the coronavirus. “It is failing. Let’s admit it.” He added, “The idea of anybody getting [testing] easily, the way people in other countries are doing it, we’re not set up for that. I think it should be, but we’re not."
We also know the World Health Organization had working tests that the United States refused, and researchers at a project in Seattle tried to conduct early tests for the coronavirus but were prevented from doing so by federal officials. (Doctors at the research project eventually decided to perform coronavirus tests without federal approval.)
But that’s not all. The president reportedly ignored early warnings of the severity of the virus and grew angry at a CDC official who in February warned that an outbreak was inevitable. The Trump administration dismantled the National Security Council’s global-health office, whose purpose was to address global pandemics; we’re now paying the price for that. “We worked very well with that office,” Fauci told Congress. “It would be nice if the office was still there.” We may face a shortage of ventilators and medical supplies, and hospitals may soon be overwhelmed, certainly if the number of coronavirus cases increases at a rate anything like that in countries such as Italy. (This would cause not only needless coronavirus-related deaths, but deaths from those suffering from other ailments who won’t have ready access to hospital care.)

Some of these mistakes are less serious and more understandable than others. One has to take into account that in government, when people are forced to make important decisions based on incomplete information in a compressed period of time, things go wrong.
Yet in some respects, the avalanche of false information from the president has been most alarming of all. It’s been one rock slide after another, the likes of which we have never seen. Day after day after day he brazenly denied reality, in an effort to blunt the economic and political harm he faced. But Trump is in the process of discovering that he can’t spin or tweet his way out of a pandemic. There is no one who can do to the coronavirus what Attorney General William Barr did to the Mueller report: lie about it and get away with it.
The president’s misinformation and mendacity about the coronavirus are head-snapping. He claimed that it was contained in America when it was actually spreading. He claimed that we had “shut it down” when we had not. He claimed that testing was available when it wasn’t. He claimed that the coronavirus will one day disappear “like a miracle”; it won’t. He claimed that a vaccine would be available in months; Fauci says it will not be available for a year or more.
Trump falsely blamed the Obama administration for impeding coronavirus testing. He stated that the coronavirus first hit the United States later than it actually did. (He said that it was three weeks prior to the point at which he spoke; the actual figure was twice that.) The president claimed that the number of cases in Italy was getting “much better” when it was getting much worse. And in one of the more stunning statements an American president has ever made, Trump admitted that his preference was to keep a cruise ship off the California coast rather than allowing it to dock, because he wanted to keep the number of reported cases of the coronavirus artificially low.
“I like the numbers,” Trump said. “I would rather have the numbers stay where they are. But if they want to take them off, they’ll take them off. But if that happens, all of a sudden your 240 [cases] is obviously going to be a much higher number, and probably the 11 [deaths] will be a higher number too.” (Cooler heads prevailed, and over the president’s objections, the Grand Princess was allowed to dock at the Port of Oakland.)
On and on it goes.
To make matters worse, the president delivered an Oval Office address that was meant to reassure the nation and the markets but instead shook both. The president’s delivery was awkward and stilted; worse, at several points, the president, who decided to ad-lib the teleprompter speech, misstated his administration’s own policies, which the administration had to correct. Stock futures plunged even as the president was still delivering his speech. In his address, the president called for Americans to “unify together as one nation and one family,” despite having referred to Washington Governor Jay Inslee as a “snake” days before the speech and attacking Democrats the morning after it. As The Washington Post’s Dan Balz put it, “Almost everything that could have gone wrong with the speech did go wrong.”

[Read: You’re likely to get the coronavirus
Taken together, this is a massive failure in leadership that stems from a massive defect in character. Trump is such a habitual liar that he is incapable of being honest, even when being honest would serve his interests. He is so impulsive, shortsighted, and undisciplined that he is unable to plan or even think beyond the moment. He is such a divisive and polarizing figure that he long ago lost the ability to unite the nation under any circumstances and for any cause. And he is so narcissistic and unreflective that he is completely incapable of learning from his mistakes. The president’s disordered personality makes him as ill-equipped to deal with a crisis as any president has ever been. With few exceptions, what Trump has said is not just useless; it is downright injurious.
The nation is recognizing this, treating him as a bystander “as school superintendents, sports commissioners, college presidents, governors and business owners across the country take it upon themselves to shut down much of American life without clear guidance from the president,” in the words of Peter Baker and Maggie Haberman of The New York Times.
Donald Trump is shrinking before our eyes.
The coronavirus is quite likely to be the Trump presidency’s inflection point, when everything changed, when the bluster and ignorance and shallowness of America’s 45th president became undeniable, an empirical reality, as indisputable as the laws of science or a mathematical equation.
It has taken a good deal longer than it should have, but Americans have now seen the con man behind the curtain. The president, enraged for having been unmasked, will become more desperate, more embittered, more unhinged. He knows nothing will be the same. His administration may stagger on, but it will be only a hollow shell. The Trump presidency is over.
We want to hear what you think about this article. Submit a letter to the editor or write to letters@theatlantic.com.

PETER WEHNER is a contributing writer at The Atlantic, a senior fellow at the Ethics and Public Policy Center, and Egan visiting professor at Duke University. He writes widely on political, cultural, religious, and national-security issues, and he is the author of The Death of Politics: How to Heal Our Frayed Republic After Trump.

Posted by Angela Valenzuela at 12:31 AM