A Personal Message on Why I Blog and a Word of Thanks by Angela Valenzuela, Ph.D. 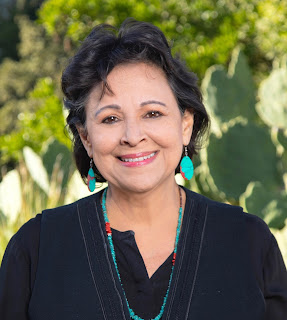 This blog passed the two-million-page-views mark sometime over the weekend. I take this to mean that I am providing an important service that clearly, the public wants and appreciates. I want to thank all of you who follow this blog for your interest in what is today a respectable digital archive on issues that I have followed over the years, including high-stakes testing, civil and human rights, voting rights, Ethnic Studies, Indigeneity, bilingual education, and an array of social, cultural, and environmental issues that get my attention.

Prior to running this blog, I had a listserv for seven years. A former colleague, Dr. Susan Empson, who teaches now at the University of Missouri said to me one day in 2003, "You should consider having a blog." Back then, the Cloud didn't exist and was thusly always in need of space to house items that I had been gathering over the many years of operating the listserv. A blog was the solution. Here is a brief history on blogging that situates this blog in the early period of "Mommy blogs" and live blogging just before YouTube got launched. Can we even imagine a world without either Youtube or the Internet?

Pardon the cliché, but I sensed this as a "brave new world."

What did it mean for someone like myself, a university professor, to blog? There's something curiously safe when producing knowledge for narrow audiences. It's yet another to "put yourself out there" for the world to see.  Moreover, I wasn't sure at the time how it would impact my career, especially since I didn't progress to full professor until a year later in 2005.

Might I jeopardize my chances for promotion to full professor status? I asked myself. After blogging for a few years, I remember a former university provost friending me on Twitter  (where all my blogs get posted) four months prior to his taking the position. He couldn't have known me from Adam. Was I on some list? I suppose so. I ran into him months later and he said, "I follow you," in a friendly voice. "I follow you, too," I said, exchanging smiles.

There were clearly some bumps in the road but all in all, my blogging experience has been very positive. I do encourage those around me like students and fellow faculty to set up their own blogs and cultivate their own public voices. After all, as we know now, independent authoritative voices contribute to the maintenance and deepening of our democracy. We all not only want good information and knowledge, we also want it to come from a studied standpoint and a trustworthy place. Moreover, authenticity in the blogosphere, I have learned, is gold.

So much pulls at everyone's attention such that I have come to see how blogs can occupy a special place in social media by anchoring progressive policy agendas like the important fight today against extremism, the ongoing struggles for Bilingual Education, culturally sustaining curriculum, Ethnic Studies, school finance, and the never-ending fight against not assessment, but high-stakes testing, and other public policy battles at local, state, and national levels.

Still, the question of why I blog, especially in light of my earlier insecurities about my own voice in the public sphere merits further elaboration.

I remember that what was happening in the early 2000s when the idea of blogging first entered my imagination, the immigrant rights DREAMer Movement of which I was, and have been a part, was in full swing. I witnessed all these young, fearless Millennials using the full measure of their tech-savviness and political astuteness in messaging to push their federal DREAM Act agenda out into the public sphere.

By any measure, the DREAMers were hugely successful in what we in policy term, "agenda setting." They were brilliant and motivated. They achieved national and international notoriety, resulting in the Federal DREAM Act. And that's a big deal.

They motivated and inspired me to similarly be courageous. After all, I am privileged to be a researcher and scholar at the University of Texas and relative to these students and the many risks they took and continue to take, I had little to lose and much to gain.

I owe it to people like Montserrat and her sister, Julieta Garibay, and all the DREAMers I've come across over the years who are a testament to what can get accomplished if we get in front of an issue as opposed to cowering behind it. So, I ventured forth and here you have it, a 17-year-old blog.

I owe so much, as well, to my undergraduate, masters and doctoral students over the years, whose energies and passions have nourished within me an ongoing sense of renewal. My family, too, had their own questions about all this in the early years and thankfully, have supported my incessant blogging throughout.

In Greek, my name means "messenger." It certainly aligns. It's that pull, and occasional yank. It's that push, if not an impulse, that whisper in the ear, that impels thought and action. What also aligns is that today, 16 years ago, my beautiful mother and best friend passed away. I love you, Mom! ❤️

For those of you who would like to know a little bit more about me, I share below a bio, versions of which I make available when asked. Again, thank you for your interest in this blog and in our collective struggle for justice and a better world that simultaneously harnesses Earth's power to heal herself and affirms the notion of a shared humanity.

Angela Valenzuela, Ph.D., is a Professor in the Department of Educational Leadership and Policy with a courtesy appointment in the Department of Curriculum & Instruction at the University of Texas at Austin. She is the director of the Texas Center for Education Policy. Previously,  she taught in the Department of Sociology at Rice University in Houston (1990-98), and she was a Visiting Scholar at the Center for Mexican American Studies at the University of Houston (1998-99). She completed her Ph.D. at Stanford University and is the author of the award-winning book, Subtractive Schooling: U.S.-Mexican Youth and the Politics of Caring (1999), as well as Leaving Children Behind:  How “Texas-style” Accountability Fails Latino Youth (2005), and Growing Critically Conscious Teachers: A Social Justice Curriculum for Educators of Latino/a Youth (2016).

Dr. Valenzuela served as an expert witness on curriculum in Arce, et. al. v. Douglas,793 F. 3rd 968 (2015) where Mexican American Studies plaintiffs prevailed and the dismantling of Tucson Unified School District’s MAS program was found unconstitutional both in enactment and enforcement by Judge A. Wallace Tashima. 269 F. Supp. 948 (D. Ariz. 2017), citing violations to the Equal Protection Clause of the Fourteenth Amendment and the First Amendment.

Locally, Dr. Valenzuela co-founded Academia Cuauhtli, a language and cultural revitalization project that is currently in its eighth year of operation. This work has involved the development of a professional, Spanish and English, culturally sustaining curriculum and pedagogy for fourth- and fifth-graders attending eight East Austin schools. We host  professional development workshops for Austin Independent School District dual language/bilingual education teachers. Over the years, we have enjoyed the service of hundreds of volunteers, including graduate students and faculty from the University of Texas at Austin, Texas State University and Houston-Tillotson University. A special feature is a danza Mexica (Aztec dance or ceremonial) curriculum that inspires our youth even as it invokes a deep, joyous sense of the sacred in education.

A previous Fulbright Scholar, Valenzuela spent her 2007-08 academic year in Mexico where she taught in the College of Law at the University of Guanajuato in Guanajuato, Guanajuato and conducted research in the areas of immigration, human rights, and binational relations. Most recently, she was honored to have been selected to be a scholar in residence in the School of Education at the University of Colorado at Boulder. In 2019, she received the Henry H. Trueba Award for Research Leading to the Transformation of the Social Contexts of Education from the American Educational Research Association.

In 2020, she was winner of the 2021 Elizabeth G. Cohen Distinguished Career in Applied Sociology of Education Award. This award is presented every other year by the Sociology of Education special interest group of the American Educational Research Association "in recognition of a research career that is an exemplar of how to successfully bring rigorous research to bear on solutions to problems in practical settings."

Dr. Valenzuela is particularly proud of recent recognition in the community, including earning the La Campana Award by the Mexican American School Board Association, as well as the Lifetime Achievement Award by the Emma S. Barrientos Mexican American Cultural Center in Austin, Texas. This week of November 10-12, Dr. Valenzuela also celebrates getting inducted into the 2021 cohort of the National Academy of Education.

You can find many of my published articles in Google Scholar, Academia.edu, and ResearchGate.net

Posted by Angela Valenzuela at 11:00 AM