Great quote by former Richardson ISD superintendent Jeannie Stone: "CRT is about as easy as nailing Jell-O to a moving train." When one considers that bill sponsor Rep. Steve Toth also didn't know something he was against, it all starts to get really ludicrous. No, it's not about teaching culturally relevant curriculum. According to Stone, the fight against CRT is designed to protect weak-kneed adults from children as follows:

Adults should improve their posture rather than compensating for weakness. Moreover, as Stone suggests, they should not at all confuse CRT with culturally relevant teaching or pedagogy.

Nobody can agree on what CRT means, or whether it's actually being taught in public schools. 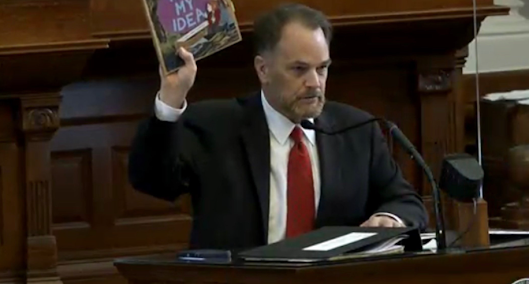 It’s only three letters, but defining CRT is about as easy as nailing Jell-O to a moving train—something former Richardson ISD superintendent Jeannie Stone explained recently in a post on her blog.

First, there is what it is on its face: Critical Race Theory, a 40-year-old academic theory that examines race as a social construct, and how it has become entrenched in how justice is meted out and how public policy is formed.

Then there’s what many educators at first (Stone included) thought it was: Culturally Relevant Teaching, which works to build connections between student culture at home and what they experience at school. When you have districts as diverse as Richardson ISD and Dallas ISD, for instance, that opportunity to provide a mirror (students seeing themselves as appreciated in the classroom for the experiences and perspective they bring) versus a window (looking at fellow classmates, but not a part of the actual learning process) is an important one.

It’s why some of the first queries about CRT at a Richardson school board meeting threw Stone for a loop.

“I honestly thought throughout the entire meeting she was referring to concepts we had been attempting to advance for years in Richardson ISD: Culturally Relevant Teaching. Because … Culturally Relevant Teaching (aka, “the other CRT”), is a thing–a really, really important thing–and something I had been heavily researching and referencing all throughout my last four years as a superintendent, albeit I regret that it wasn’t longer.”

Stone said that she actually had to look up Critical Race Theory to learn what parents were telling her they didn’t want to be taught at their schools.

District staff began digging into work by Zaretta Hammond (Culturally Responsive Teaching and the Brain) and Dr. Sharrocky Hollie (Strategies for Culturally and Linguistically Responsive Teaching and Learning), bringing the latter in to train administrators and later teachers in some of the district’s most diverse campuses, well before the movement against the “other CRT” was even a nascent idea.

“Beyond making individual connections, there is great communal value in helping students understand the cultures of other students with whom they interact,” she writes. “Developing their understanding of other cultures lets students have more meaningful interactions with those around them.”

But then the anti-CRT movement began to take hold. Parents began demanding that districts cease teaching something they weren’t teaching. At that point, CRT took on a third meaning: everything from Black history to Black Lives Matter to virtually any effort toward diversity, equity, and inclusion was conflated with CRT.

Then, as state legislatures began to convene, actual legislation banning CRT (although in many cases lawmakers don’t actually mention CRT in the bills) began to hit statehouse floors. Then those bills were passed, and nearly all put limits on social studies curricula that addressed race or history in ways that made people uncomfortable.

It’s a phenomenon I wrote about over the summer, as I covered House Bill 3979, Texas’ “anti-CRT” bill:

“I can tell you that right now, without my help, my fourth-grader can tell you what is going on in the world because he watches the news. He has access (with supervision) to the internet. He has friends. Your child does, too. The genie is out of the bottle, the cat’s out of the bag. We’re not protecting children with these bills, we’re protecting adults. We’re protecting adults from children, because adults are afraid of looking hypocritical, of being caught flat-footed when their child questions some view on race they’ve voiced at the dinner table.”

As I wrote, my family tree is entwined with the use of enslaved Black people as free labor. It is never comfortable to think about or talk about. But even learning about that history is being cut off entirely in some cases, with just the barest of mentions about slavery in textbooks. (I know, I sat next to a fourth-grader for all of 2021.)

Stone lays out the case for why it’s important to approach the classroom in culturally relevant and informed ways—and why that is imperiled by this wave of anti-CRT rhetoric.

“It seems as though Critical Race Theory was the perfect weapon of disruption to stall forward momentum in equity work which aims to close achievement gaps,” Stone says. “Maybe it was even part of the strategy to conflate Critical Race Theory (CRT) with Culturally Relevant Teaching (CRT) to focus the opposition’s attack, and also to muddy the waters of public debate even further.”

Later this week, we’ll talk about the additional unintended consequences of anti-CRT legislation.

View Profile
Bethany Erickson is the senior digital editor for D Magazine. She's written about real estate, education policy, the stock market, and crime throughout her career, and sometimes all at the same time. She hates lima beans and 5 a.m. and takes SAT practice tests for fun.
Posted by Angela Valenzuela at 9:12 AM