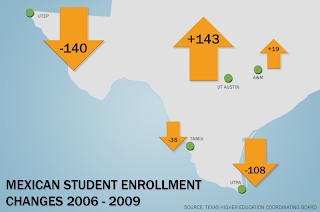 Armando Martinez did not fear the violence that has engulfed his hometown, Juárez. Like thousands of young people from the border region, he moved to avoid getting sucked into the same life he'd always known. He wanted more, better.

So after attending school in Mexico through 11th grade and then graduating from Ysleta High School in El Paso, he applied only to the University of Texas at Austin, bypassing the UT System’s El Paso campus.

With a full-ride scholarship, he set his sights on the state capital to escape “a border-town mentality," he says. Now, as a fifth-year advertising major leading the Mexican Student Association, Martinez knows many of his fellow border region transplants in Austin. "Once we've taken a step," he says, "we've liked it."

Fewer and fewer students from Mexico have been attending UTEP since 2006, even as total foreign student enrollment in American universities rose. Enrollment at other border institutions, including UT-Pan American in Edinburg and Texas A&M International University in Laredo, is also down since then, according to state data. Meanwhile, the number of Mexican students at UT-Austin has grown by half since 2006 and has increased at Texas A&M University's flagship College Station campus, too.

UTEP officials aren't certain why fewer Mexican students are enrolling there, but they cite border violence and the attendant economic woes in Juárez, El Paso's sister city, as possible reasons. Others say the drug war just compounds the decades-old problem of border “brain drain,” as locals call it. Students who have moved away say bigger institutions in larger cities simply offer more opportunities. Martinez, for one, brushes off the violence. "I have immense love for the city of Juárez," he says. But, he adds, in Austin, “there’s a lot of other ways things flow: different cultures and values and customs and morals that really do influence you and grant you other opportunities.”

Mexican student enrollment at UTEP dropped to 1,702 in the fall of 2009 from 1,842 in the fall of 2006, according to state data. UTEP President Diana Natalicio maintains that the drop was even greater: to 1,415 students last fall, out of a total student population of roughly 20,000. (The enrollment is almost exclusively local: about 17,000 students come from El Paso County.) The dip could reflect larger trends: Between 1990 and 2000, the number of 15- to 29-year-olds in El Paso shrank by about 7,000, according to census data — even as El Paso's population grew by nearly 50,000.

Joseph Villescas, an El Paso business consultant, says the city has succeeded in boosting the number of college-bound Latino students but has failed in luring them back home. “We have yet to develop a system that links back the investments we make in students’ early development,” says Villescas, whose firm has surveyed El Paso expatriates, probing the reasons they left the border region. “Annually, we're losing thousands of kids to places like Austin,” he says. Villescas is concerned about “who will keep the lights on” in his hometown in the future.

The drop from 1990 to 2000 had a “fairly significant economic impact” on El Paso, says El Paso Councilwoman Susie Byrd. Today the city is focusing on downtown development and open space preservation, she says. It even closes down Scenic Drive along the Franklin Mountains for biking and running on “Scenic Drive Sundays” in an effort to appeal to young people and families.  The violence across the Rio Grande may also play a role in the exodus of young and talented El Pasoans but cannot be blamed for the “brain drain,” Byrd says.

Yet the bloodshed in Juárez undoubtedly has an effect. In May, Alejandro Ruiz Salazar became the first UTEP student killed in Mexico's drug war. At border crossings, security checks mean students wait 90 minutes or more to make the three-and-a-half-mile trip from Juárez to campus, according to the UTEP student newspaper. Heeding a State Department travel warning this year, the university shut down authorized travel to Mexico, preventing even students' work in Juárez health clinics. And some students are short on tuition money because their parents in Juárez have closed their businesses for fear of extortion or thuggery. “I think that this violence has been extraordinarily disruptive,” Natalicio says.

Life as a student on the border also takes a psychological toll, which UTEP doctoral student Thom Taylor is seeking to understand. This year, Taylor surveyed 130 UTEP students who speak Spanish, have internet access and travel to Juárez at least three times a week. Young, mobile and bilingual, they likely represent the most affluent, educated and healthiest population of the border region, Taylor says.   Preliminarily, he found that, according to traditional measures, about 40 percent of the students experienced post-traumatic stress disorder. His early results also indicated the amount of time that students spent in Juárez had no correlation to their level of traumatic stress; simply moving to El Paso did little to improve their mental health. Neither did their level of social support have any effect, he says, because friends and family were often going through the same trauma, if not worse.

Students' exposure to traumatic stress, though, "does not necessarily doom them to a life of mental health issues," Taylor says. Many are finding ways to cope. Some take different routes every time they drive to and from school. Others get help at the on-campus counseling center. Still others leave, moving on to universities farther away from the border, says Tony Payan, a UTEP political science professor. "They simply don't find the border that appetizing,” Payan says.

"The best that I can do"

Aura Valdez explains the factors she juggled as a transfer student from UTEP to UT-Austin. “I didn’t want to get stuck,” she says, “and I knew if I didn’t transfer when I was supposed to — like, as soon as I got my credits done — I wasn’t going to leave.” Valdez, 21, graduated from Americas High School in El Paso after moving from Juárez in the 10th grade. A political communications and government major, she transferred to UT-Austin in 2009 but still travels several times a year to Juárez, where her father, a doctor, lives and works.

Her decision wasn’t based on the violence in Juárez that had spiked a year earlier. She wanted more opportunities than what UTEP and El Paso could provide. "I'm already going to be in the U.S.," the aspiring lawyer says of her decision to transfer. "I might was well do the best that I can do." Her 16-year-old sister, Michelle, wants to follow in her older sister’s footsteps and leave El Paso after high school. Their parents are hesitant for Michelle to move away, too, but Aura encourages it. "I'm the only one supporting her," she says. "I know what it's like to feel that you're going be trapped."

During her trips to Mexico, including one last month, Aura has not witnessed any of the horrors that her friends back home have, and she’s not scared to go. But her mother, who lives in El Paso, worries. The peace of mind her mother gets from knowing her elder daughter is in Austin turns to concern during summer break, when Aura frequently visits her father.

And though she's not afraid for her own safety, Valdez says she does worry for friends who are still there. “I get calls,” she says, “telling me, you know, this friend just passed away, they killed them at this place.”
Posted by Dr. Patricia D. López at 11:43 PM