Check out the results of the full survey.

6.23.10 - ARLINGTON, VA—While this Independence Day will certainly include the usual festivities – fireworks, cookouts, patriotic speeches and Americans dressed in red, white and blue – the meaning behind the celebration has not been lost on America’s next generation.

Perseverance and Courage Valued Most, Declaration of Independence and Thomas Jefferson Inspire Most

A new nationwide survey of nearly 3,000 high school students, released today by the Bill of Rights Institute, Arlington, VA, provides a glimpse into what the nation’s future leaders think about American citizenship: what civic values they admire, who their political heroes are, and which of our Founding documents inspire them the most.

The survey, based on an analysis of the top 3,000 essays submitted in the Bill of Rights Institute’s 2009-10 Being an American Essay Contest – the nation’s largest high school essay contest, with more than 50,000 entries this year – concentrated on three themes: civic values, Founding Fathers and American heroes, and Founding documents.

1. WHAT CIVIC VALUES DO AMERICAN STUDENTS VALUE MOST?

“Perseverance” and “courage” were cited most often as the civic values essential to being an American, with each value being chosen by approximately 15 percent of participating students. Other civic values identified by large numbers of students included equality and respect (14 percent), entrepreneurialism (12 percent), responsibility (9 percent) and liberty (8 percent). 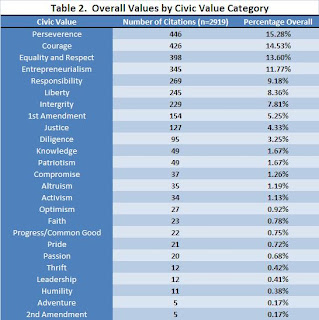 2. WHO ARE THEIR HEROES, PAST AND PRESENT? 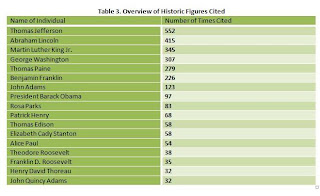 3. WHICH FOUNDING DOCUMENT INSPIRES THEM THE MOST?

Students cited the Declaration of Independence (47 percent) and the Constitution (33 percent) as the two most important and inspiring Founding documents, followed by Thomas Paine’s pamphlet, Common Sense.

The breakdown of other Founding documents cited is outlined below:

These results were consistent across all high school grade levels, in all school settings (public, private and home school), with one exception: The majority of 10th graders identified President Lincoln, not Jefferson, as their top hero.

“It’s clear that students have strong opinions about what it means to be a modern American in light of our Founding Fathers and documents,” said Jason Ross, Ph.D., vice president of education programs for the Bill of Rights Institute. “Perhaps even more important: The students believe that American citizens have a responsibility to live by certain principles, or civic values, and understand the importance of perseverance and courage.”

The analysis was conducted by Social Dynamics, LLC for the Bill of Rights Institute and paid for with a donation from Dr. John M. Templeton, Jr. Copies are available online at www.billofrightsinstitute.org or by contacting Sonia Blumstein at 205.620.2087 or Sonia@PRoactiveSolutionsInc.net.

About the Being An American Essay Contest:

Sponsored by the Bill of Rights Institute, this annual contest asks students to write an essay in response to the following question: “What civic value do you believe is most essential to being an American? Trace the enduring importance of this value throughout the American story by discussing: a Founding document that reflects this value; a figure from American history who embodies this value; and examples of how you have and/or could put this value into practice.”

About the Bill of Rights Institute:

The Bill of Rights Institute, founded in 1999, is a nonprofit educational organization. The mission of the Bill of Rights Institute is to educate young people about the words and ideas of America's Founders, the liberties guaranteed in our Founding documents, and how our Founding principles continue to affect and shape a free society.
Posted by Dr. Patricia D. López at 11:46 PM

Email ThisBlogThis!Share to TwitterShare to FacebookShare to Pinterest
Labels: identity