According to this report on NPR, Flushing International has a four-year graduation rate of 70%.  That’s amazing!  Wonder how many of these youth go to college and graduate.    Would be good to know more about this school. 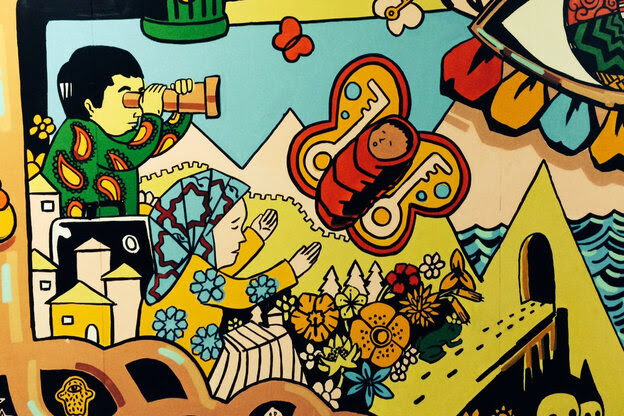 Alexandra Starr
Flushing International High School is like a teenage version of the United Nations. Walk down the hallway and you can meet students from Colombia, China, Ecuador, Bangladesh and South Korea.
"Our students come from about 40 different countries, speak 20 different languages," says Lara Evangelista, the school's principal.

With schools around the country scrambling to educate the more than 57,000 unaccompanied child migrants who've crossed the border this year, I came to see what lessons International Schools like this one can offer.

"We've always served unaccompanied minors," Evangelista says. "This is not something new to us. I would say we have systems and structures in place to serve the needs of those students.

New York's international schools serve a challenging demogaphic: Enrollees must come from the bottom quartile in scores on English-language tests. They must have been in the U.S. for less than four years upon admittance; most have been in the country for far less time. And 90 percent of the students qualify for free or reduced lunch.

But these schools have created a model that allows many of these children to catch up to their U.S. peers. And the approach over the years has been shown to work.

Evangelista takes me around the school to show me how they do it. "Hey guys, it's time," she says, ushering a group of students into their second-period classes. "C'mon, let's go!"

This fall, she says, about 60 of the school's new enrollees are from Central America.

She leads me into a language-arts class down the hall. In a corner of the classroom, we watch as half a dozen teenagers work on a poster board. They're creating it for a presentation they'll do on culture and food.

The teachers, she explains, do this on purpose: Grouping students together who don't speak the same language spurs them to communicate in English.

But the students aren't put in a situation where they have to sink or swim. Flushing educates its ninth and 10th graders together, and within these groups, teachers often pair freshmen with sophomores who speak the same language.

David Martinez is a recently arrived ninth grader from El Salvador. As he marks up the poster with a black marker, he tells me there are just a few phrases he's comfortable saying in English. "My name is David," he says, using one of them.

He's been paired up with a sophomore from Ecuador who has been in the U.S. for two years. Martinez says that having a buddy who can translate for him is huge. "It helps me understand a little," he says in Spanish. "It's complicated, but I'm getting there."

Teachers here say they strive for a balance: Kids are encouraged to speak in English but are also given the opportunity to learn in their native language.

I see this in action in Rosmery Milczewski's math class, where she elicits responses in multiple languages.

"What is the slope?" she asks her students during a geometry lesson. One student offers that, "T is the slope." "Good," she responds. "Who can say that in Spanish? ... Who can say that in Chinese?"
Later, she explains her approach: "I encourage and push those who I know can tell me in English to try. And for those who just came, I encourage them to use native language."

Principals at the International High Schools intentionally hire a multilingual staff. Evangelista estimates that, collectively, staff members can speak virtually all the languages represented among the student body.

Math teacher Milczewski works with a lot with the school's Latino families. She can personally relate to the students' experiences: Milczewski herself arrived from Colombia as a teenager and attended LaGuardia International High School.

Shared Experiences
Even though the kids come from all over the globe, there are commonalities in their experiences.
A big one is overcoming a long separation from one or both parents. A lot of Flushing students were left behind in their country of origin when their parents first journeyed to the United States.

The educators at Flushing encourage students to share these stories. They say that helps the kids realize they're not the only ones who have dealt with issues like living apart from their parents.

In the hallway, Evangelista and I stop to talk about this with several students, and Yichen Hu shares a story with other 11th graders.

"I felt hope when the officer told me, 'Yes, you can go to the United States now,' " says the 18-year-old from China. "I was thinking, if I can go to the U.S, then I can meet my dad again. Because he left China when I was 12. So I felt hope for reuniting with my dad."

She says attending a school where students can relate to what she's been through makes her feel less alone. "I like school very much," she says. "It makes me feel really connected."
Alexandra Starr is a freelance reporter and writer in New York City.


Posted by Angela Valenzuela at 7:03 AM