This piece is about how our schools receiving these new arrivals need to have an infrastructure in place in order to best serve them. Enrique's Journey, by Sonia Nazario, addresses this theme of unaccompanied minors in a deeply, personal and engaging way and should be required reading for all adults and children, especially those that have gone through this experience.  Here's the "young people's" and regular versions, respectively:

For the critical and open mind, these are great X-mas presents.  They put a face on the complexity of these children's lives that collectively bear the brunt of a multiplicity of decidedly harsh and severe factors beyond their control.  Nevertheless, a major point that Nazario makes and with which I agree, is that  while all of these children are seriously traumatized  by this horrific journey,  we as a receiving community in the United States have a lot to work with.   They have what some call "grit" beyond measure— indeed, unlike anything that our country has ever seen.  This not at all an exaggeration.  They have their wits, coupled with courage and determination, to survive.

We are all indebted to to Sonia Nazario, as well, for her courageous efforts and sacrifice in bringing this story to light.  Happy Thanksgiving, all!

By Lillian Mongeau / THE HECHINGER REPORT

Brandon, who did not want to give his last name because of a pending deportation hearing, is one of 66,127 young people traveling alone who were caught on their way across the U.S.-Mexican border between Oct. 1, 2013 and Aug. 31, 2014.
In 2011, U.S. Customs and Border Patrol began to see a sharp rise in the number of unaccompanied children coming from Guatemala, Honduras and El Salvador. So far in fiscal year 2014, the number of unaccompanied minors caught on the southern border is more than triple the number apprehended in 2010.
Like most new arrivals, Brandon is a here for a complex web of reasons: to flee wanton violence, to escape grinding poverty, and to reunite with family living in the U.S.
Whatever their reasons for coming, the vast majority of the newly arrived children — both the ones the government caught on the way here and the unknown number who made it across without getting picked up by Border Patrol — are now attending the one American institution legally bound to serve them: public schools.
Arriving After Trauma
A majority, 58 percent, of the children arriving here have left war-like conditions that could qualify them for international protection as refugees, according to a recent report by the Office of the United Nations High Commissioner for Refugees, commonly known as UNHCR. The international agency recommends a thorough screening of each arriving minor to determine if he or she qualifies for that protection. Buffeted by shouting matches in Washington, D.C. and several state capitals, that process is underway.
In the meantime, schools across the country are enrolling large numbers of newly arrived Central American students and trying to figure out the best way to serve them.
Related: Q&A with Elizabeth Yelen: Traumatized children have trouble learning – here’s how to help
Many new arrivals have had little formal schooling. A majority stopped attending school after sixth grade, according to UNHCR. In addition to learning English and the subject matter of their various classes, they also must learn to raise their hands to answer questions, change classes when a bell rings and never wander the halls without a bathroom pass. And there are still those normal teenage concerns: remembering one’s locker combination and flirting, now in a new language. 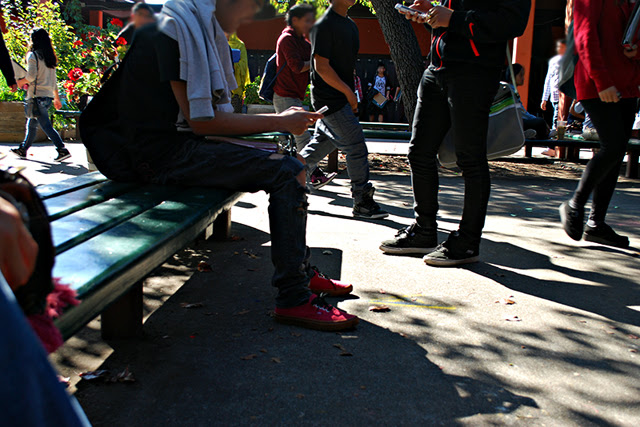 Half of the 390 students at Oakland International High School have arrived in the U.S. from Central America in recent years. Many of them came without a parent or guardian. (Photo: Lillian Mongeau)
A full introduction to all of the requirements of attending school, along with continued support and understanding as students figure things out, will help with this massive shift, said Mary Beth Klotz, director of education practice at the National Association of School Psychologists. So will trauma-informed instruction that takes the new students’ background into account.
Even those who are here more for economic opportunities than out of fear have undertaken a long journey without parents before arriving in a foreign land. And teachers should keep in mind that students who have been here for quite a while still may not be fully settled in, Klotz said.
“There may be a honeymoon period where (students) are absorbing everything new and it may take a while to absorb it before behaviors come out that are concerning,” like tearing up a frustrating assignment or crying at the slightest provocation, Klotz said.
Both reactions are common for people who have survived trauma, Klotz said.
Klotz said she would urge teachers and other school staff to avoid rushing to judgment if a student has emotional problems after only a few weeks in a new country. “It’s really going to take time,” she said.
‘Cobbling Together Resources’
California received 4,680 children from detention centers between Jan. 1 and Aug. 31, 2014 according to the federal Office for Refugee Resettlement. (That gave California the third-largest number of children from detention centers, following New York, with 4,799 children, and Texas, with 6,217.) It’s impossible to calculate how many others have arrived without notifying officials. 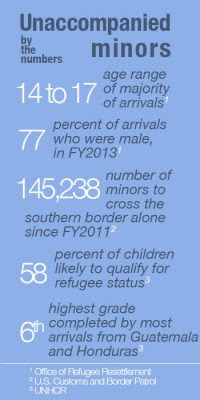 
Interpreting and reporting for this story were contributed by Jasmín López.
This story was written by The Hechinger Report, a nonprofit, independent news website focused on inequality and innovation in education. Read more about California education.
Posted by Angela Valenzuela at 12:22 PM