Mexico reels, and the U.S. looks away

Check out this Op-Ed piece from the L.A. Times.  There is a "political earthquake" taking place in Mexico right now—at a level that has perhaps not been seen in more than a hundred years.

To understand the historical significance -- and the moral and political gravity -- of what is occurring, think of 9/11, of Sandy Hook, of the day JFK was assassinated. -

On Thursday, Nov. 20, the civil society movement will celebrate the 104th anniversary of the Mexican Revolution with a national day of marches and work stoppages. Will Americans notice?

Mexico reels, and the U.S. looks away

In Mexico City, demonstrators march with signs saying "It was the state" and showing images of Mexican President Enrique Peña Nieto, right, and Atty. Gen. Jesus Murillo Karam in a protest over the disappearance of 43 college students. (Eduardo Verdugo / Associated Press)
By Rubén Martínez
The disappearance of 43 rural students has awakened Mexican despair and rage.
The violent disappearance of 43 students from the Ayotzinapa teachers college in Guerrero state has caused a political earthquake the likes of which Mexico has not seen in generations — perhaps even since the revolution of 1910.

That makes it all the more baffling how little attention most people in the U.S. have paid to the unfolding tragedy. To understand the historical significance — and the moral and political gravity — of what is occurring, think of 9/11, of Sandy Hook, of the day JFK was assassinated. Mexico is a nation in shock — horrified, pained, bewildered.

Mexicans gather with candles demanding justice for 43 missing students and the end of violence in the country. (Sashenka Gutierrez / European Pressphoto Agency)
These emotions have been swelling since late September but have become overpowering since Mexican Atty. Gen. Jesus Murillo Karam held a news conference this month detailing the federal government's investigation into the students' disappearance, which relies heavily on testimony from men who allegedly participated in their slayings.

------------
For the record: An earlier version of this article said Jesus Murillo Karam's news conference detailing the investigation was held Nov. 10; it was Nov. 7.

------------
Within hours of the media event, a spontaneous vigil formed at the Angel of Independence, an iconic monument in downtown Mexico City usually reserved for raucous soccer victory parties. The vigil later became a march to Murillo Karam's headquarters. Nationwide there have been dozens of major demonstrations since the students went missing — most of them have been peaceful, but a significant few have turned violent.

Mexico is on the brink, and America is largely oblivious. 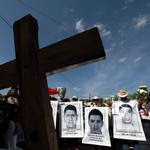 Op-Ed
A call for authentic democracy in Mexico

Murillo Karam's announcement that the students were almost certainly murdered was a devastating blow to the national psyche. Until then, Mexicans had nurtured their slim hopes that the students were still alive (a hope stoked by the parents of the missing, who have tenaciously agitated on behalf of their children).

Now people are struggling to grasp the enormity of a case that pulls together all the forces that feed the monstrous violence of the drug wars. In light of what happened, it is no longer possible to ignore the close links between virtually all the country's political institutions and organized crime.

To understand the historical significance -- and the moral and political gravity -- of what is occurring, think of 9/11, of Sandy Hook, of the day JFK was assassinated. -
Jose Luis Abarca and his wife, Maria de los Angeles Pineda, the then-mayor and first lady of Iguala, the city where the abductions took place, have been dubbed the “imperial couple.” On Sept. 26, authorities say, Pineda was upset that protesting students had commandeered buses to attend a demonstration, worrying that their actions might disrupt an important political event she was headlining. Her husband gave local police the order to make sure that didn't happen. After shooting six students and wounding several others, witnesses said, police handed the remaining 43 over to a local drug gang, Guerreros Unidos, to finish the job. Students who survived the attack said army personnel were in the area and aware of what was happening, yet did nothing to stop the massacre.

The fact that the local and state governments were both run by the leftist opposition Democratic Revolution Party, or PRD, decimated for many the fantasy that the modern Mexican left is a viable alternative to the center and right parties that have held the presidency in recent years. There is a sense that the entire ideological spectrum of the political class is tainted.

Finally, the portrait that emerged of the 43 disappeared — rural first-year teaching students from one of the poorest states in Mexico — made clear that they were not, as former president Felipe Calderon had intimated of the tens of thousands of victims during the early years of the drug war he initiated, corrupt and somehow deserving of their fate. They were simply innocent victims.

It was against this backdrop that Murillo Karam strode to the podium and began his news conference. How could he be perceived as anything other than the embodiment of a thoroughly contaminated state, one in which the narco is the politico is the police is the army? As he laid out the evidence, which included horrific descriptions of the assassins' attempt to leave no evidence, in the eyes of many Mexicans he might as well have been confessing to the crime himself.

There is a sense that the entire ideological spectrum of the political class is tainted. -
A few hours after the news conference, the flames of a Molotov cocktail erupted before the National Palace in the grand Zocalo, or central square, of Mexico City, where a huge sign declared, “Fue el Estado” — “It was the State.” By and large, the leaderless civil society movement has proceeded peacefully, but on occasion, protesters have given the tainted state a dose of what they consider to be its own medicine — the very flames that burned the flesh of the students.

So if there is so much pain and passion in Mexico, our neighbor, a country with which we share a 2,000-mile-long border as well as profound economic and cultural ties, why such American indifference?

It has become something of a truism to point to how deeply the United States is implicated in the drug war. American demand, Mexican supply. American guns, Mexican bloodbath. And yet the merciless violence south of the border — which Mexicans now see as the state mutilating its own people — makes it easy to think of the drug war as Mexico acting out its dark obsessions. What Americans can't face is precisely that we've broken bad together with Mexico: that corruption is a binational affair, extending to rotten apples among our Immigration and Customs Enforcement agents and to an American political class that cynically keeps in place the amoral machinery of the drug war.

Shortly before Murillo Karam's news conference, the parents of the Ayotzinapa students, already informed of what was about to be revealed publicly, exhorted the world, “No nos dejen solos” — “don't leave us alone” — because no one can face such trauma without others. On Thursday, Nov. 20, the civil society movement will celebrate the 104th anniversary of the Mexican Revolution with a national day of marches and work stoppages. Will Americans notice?

Rubén Martínez is a professor of literature and writing at Loyola Marymount University. He is the author, most recently, of "Desert America: A Journey Across Our Most Divided Landscape."
Follow the Opinion section on Twitter @latimesopinion
Copyright © 2014, Los Angeles Times
Posted by Angela Valenzuela at 10:57 PM