For Trump to actually endorse the caging up of children on the U.S.-Mexico border is beyond reprehensible.  In what universe is this cruel practice anywhere near acceptable?  And then to deny children of the nutrition and medical services they need after they've been locked up is not only terribly inhumane, but risks rendering as permanent the injury of family separation that many, if not most, of these kids are experiencing as family abandonment together with psychological anguish and torture that yes, has physical manifestations, including that of a broken heart.

As child psychiatrist, Dr. Gilbert Kliman aptly states about child imprisonment, this is a “vast, cruel experiment on the backs of children."

I would hope that we all feel a deep sense of urgency regarding this need to abolish institutionalized sadism toward children.  Everybody, please register to vote.  If you've not registered to vote, go HERE  to do so.

And be sure to vote on Tuesday, November 3, 2020 and let's get this walking nightmare of a president and his barbaric policies and party out of office. 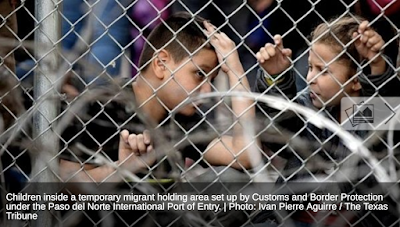 September 4, 2019
Migrant children separated from their parents and caged as part of the United States government's “zero-tolerance policy” in the U.S.-Mexico border are victims of post-traumatic stress and other serious mental health problems, according to a report released Wednesday by the inspector general's office for the Department of Health and Human Services.

According to program directors and mental health clinicians, children exhibited more fear, feelings of abandonment, heightened feelings of anxiety and loss as a result of their unexpected separation from their parents after their arrival in the U.S. in contrast to those who were not separated.
The findings are based on interviews conducted in August and September of 2018 with roughly 100 mental health clinicians and directors at dozens of the Office of Refugee Resettlement (ORR) facilities. During the interviews, there were almost 9,000 children in shelters; nearly 85 percent were 13-17 in age, 13 percent were 6-12 and two percent were infants to age five.
And although experiences of "intense trauma" were common for those children in care even before their arrival to the U.S., such as being a victim of abuse or witnessing a murder, the report noted, those separated from their parents by U.S. authorities went on to experience greater emotional and mental pain.
The report explains that some children expressed acute grief that caused them to cry inconsolably, others didn't grasp the situation of why they were separated from their parents and suffered elevated levels of mental distress.
Their psychological anguish sometimes manifested physically. "You get a lot of 'my chest hurts,' even though everything is fine [medically]," said one medical director quoted in the report, adding that  "children describe symptoms of emotional pain such as 'every heartbeat hurts’ or I can't feel my heart’.”
Program directors and mental health clinicians reported that children who believed their parents had abandoned them were angry and confused, which caused them to inflict harm on others and themselves.
Other children expressed feelings of fear or guilt and became concerned for their parents' and own welfare, as in one case a seven-year-old boy thought his father was killed and he would be next, the report detailed.
Child psychiatrist Gilbert Kliman, who interviewed dozens of migrant children in shelters after zero-tolerance took effect, told Frontline and AP that the kids can move on with their lives after reunifying with parents but may never get over it.
As children, they have night terrors, separation anxiety, trouble concentrating. As they become adults, they face greater risks of mental and physical challenges, from depression to cancer.
The watchdog also said the longer children were in custody, the more their mental health deteriorated, and it recommended minimizing that time. It also suggested creating better mental health care options and hiring more trained staff.
The average number of days for children in the custody of ORR hit a high of 93 in November 2018 and dropped to 43 by April 2019.
However, the Trump administration presented on Aug. 21 a new rule that allows officials to detain migrant families indefinitely while a court considers whether to grant them asylum, abolishing a previous 20-day limit in the long-standing Flores Settlement agreement.
The Congressional Hispanic Caucus warned the rule if implemented, will have devastating long-term consequences for children and their families.
"Flores protect migrant children from indefinite detention and inhumane conditions," tweeted the Caucus. "Now, the Trump admin is trying to tear it up and indefinitely imprison families. This will cause irreparable harm to children."

The Facilities Are Also Culprits for Their Mental and Physical Deterioration

In June, a legal team from the University of California's, Davis Immigration Law Clinic visited a Border Patrol center in Texas near the city of El Paso where more than 250 migrant children, including teens, infants, and toddlers, were locked up in "horrendous" conditions.
“In my 22 years of doing visits with children in detention, I have never heard of this level of inhumanity,” said Holly Cooper, who co-directs the Davis Immigration Law Clinic.

The experts were left aghast when faced with scenes of children enduring traumatic and dangerous situations, lacking basic human needs including adequate food and water as well as medical care.
“When the children walked into the conference room, we couldn’t believe what we were seeing. They were sick. They were coughing. They had runny noses. They were dirty, and they immediately started to describe the level of hunger that they were experiencing,” she stated, explaining that "children told us they were being fed nothing but the same meals three times a day, and they weren’t really meals."
All of the children detained in the facility come from Central American countries, mainly from El Salvador, Nicaragua, and Honduras. They came to the U.S. with a relative from whom they have been separated, and half of them have their parents in the U.S.
The report came the same week the Trump administration claimed in federal court that the government is not required to provide toothbrushes, soap or beds to children detained at the border and others reports found similar conditions at several migration jails.
For Andrea Pitzer, author and international expert on the history of concentration camps, Donald Trump’s administration has revived the concentration camp system in the U.S. and the situation is a “vast, cruel experiment on the backs of children,” Kliman warned.

Posted by Angela Valenzuela at 2:16 PM