Commentary: We need to heed our young people on climate change

August was the hottest month on record.  I don't know about you, but the August heat here in Texas felt different to me.  Not just hotter, but different.  The word, "ominous," comes to mind. For the first time in my life, "it," meaning "the heat," truly felt not just like "weather," but rather like "an event."

Arwa Mahdaw captures this well in her piece in The Guardian titled, "The world is literally on fire – so why is it business as usual for politicians?" where with the concept of “eco-anxiety," she further notes its harmful effects on our mental health.

After all, only 100 companies are responsible for 71% of global emissions. You know all this already; we all do. But our politicians still are not taking meaningful action. Capitalism is carrying on with business as usual. The world is literally on fire – and it feels as though we are fiddling with paper straws while it burns.


In the piece that follows, Bill McCann is spot on.  We must absolutely listen to our children and grandchildren. I'm a total fan of Greta Thunberg, the young, Swedish activist.  Don't even listen to the naysayers.  The world IS on fire.  Now let's do something about it.

Commentary: We need to heed our young people on climate change 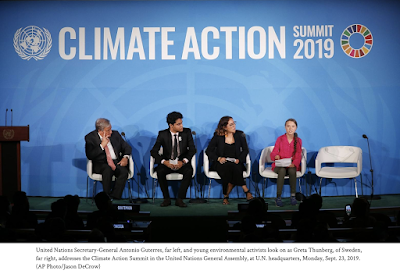 By Bill McCann / Contributing columnist |San Antonio Express-News
Thursday Sep 26, 2019 at 5:00 AMThe placards held high by the marching teenagers during the global climate strike on Friday said it all. One sign lamented: "You'll Die of Old Age, We'll Die of Climate Change." Another reminded us: "There is No Planet B." A third warned: "You Are Destroying our Future."
Young people and supportive adults marched peacefully by the millions worldwide on Friday to demand that their governments immediately address the climate crisis engulfing our planet. It was the third global climate strike organized by young activists this year. A 16-year-old Swedish activist, Greta Thunberg, inspired the strikes. She raised global awareness by protesting last year outside the Swedish Parliament to demand more aggressive action to protect the Earth from overheating.
Watching videos of throngs of young marchers demanding a better future took me back to the first Earth Day in April 1970 when millions of students participated in environmental events nationwide. They were inspired in part by a giant oil spill off the coast of Santa Barbara, Calif.; a pall of pollutants hanging over many U.S. cities; and Rachel Carson's book "Silent Spring."
I covered one 1970 Earth Day event in Cleveland, Ohio, as a reporter. Marchers walked to the Cuyahoga River, which was so bathed in oily waste that it had caught fire a year earlier. Nearby steel mill operations spewed hydrogen sulfide gases that choked the air – and all who breathed it – with the horrid smell of rotten eggs.
Earth Day became a national annual event. It helped raise the awareness of citizens and politicians who responded by enacting clean-air, clean-water, and other environmental laws. With citizen pressure, the laws worked. The nation's air began clearing of visible pollutants and unhealthy sulfur gases. Water quality improved. Fish returned.
Meanwhile, scientists determined that "greenhouse" gases like carbon dioxide, once considered harmless, weren't harmless. These gases, produced by burning coal and other fossil fuels, trap the sun's heat in the atmosphere and warm the Earth, the scientists warned.
The warnings got louder as researchers accumulated evidence of a warming planet. Even some energy company researchers recognized the problem. But the industry stayed silent. Delay was good for the bottom line. Instead, companies funded "experts" to convince the public that global warming was not real. Or if it was real, it was "natural" and not their fault. Or it would be too costly to fix. The paid deniers tried to drown out the scientific voices of reason. They often succeeded.
Now the planet is in trouble. Most of us realize it. Young people certainly do. Scientists predicted that average global temperatures would rise. They have. July 2019 was the Earth's hottest month ever recorded. Millions of people in the U.S., Europe, and Asia wilted under historic heat waves. Scientists predicted storms would become more extreme, more costly and more deadly. They have. Scientists told us land ice and sea ice would melt and sea levels would rise, threatening to swamp island nations and coastal cities. They have. Scientists said more prolonged droughts would force people to flee to other countries to survive. They have. Scientists say the climate crisis could get much worse without immediate action to cut greenhouse emissions worldwide. I believe them.
Unforgivably, President Donald Trump, supported by Republican deniers, is taking us backwards. His administration is rolling back environmental rules, resulting in more carbon emissions from coal and gas-burning power plants; more methane emissions from oil and gas operations; and reduced motor vehicle fuel economy.
In 1970, the government listened to its citizens who demanded a healthier environment. It can happen again if those serious about protecting the Earth for future generations join with their children and grandchildren to speak emphatically with their voices and votes. There is No Planet B.

Posted by Angela Valenzuela at 7:26 PM