Wrap  your heads around this: Texas has about 11.4 million Hispanic residents as compared with 11.9 million whites.

These trends and numbers are astounding given the disparities we continue to see today with respect to Hispanic representation in our flagship institutions, legislative, school board, and city council representation, the teacher workforce, and white collar occupations and industries, as a whole.   So much of this does connect to the vote as this piece suggests, but any close reading of Texas history shows that it's deeper than that.  Much deeper.

Consider for instance, an underlying dynamic that journalist, Michelle Garcia, identifies in her recent CNN Opinion piece posted to this blog titled "In Texas, A call to action against white supremacy."

"Attacking Latinos is deeply woven into the genetic coding of the state that was built on the perception that some are more worthy to govern than others."


So the "problem" isn't simply reducible to Hispanics not voting when everything has been done legally and extralegally to curtail it.  That said, we can expect the seemingly unending forms of discrimination, prejudice, and exclusion that we're witnessing in full view today bodes positively for Hispanic voter turnout in 2020 where according to estimates by the Pew Research Center (cited by Garcia), "Latinos are projected to be the largest non-white voting group in 2020."


The deadline to register to vote in the November 5th election is October 7th.  There will be 10 constitutional amendments on the ballot and special legislative elections will be held that day also. Creating a culture of voting means voting in every election.  Make sure everyone you know is registered to vote!


To do:1. Check your voter registration status.  https://teamrv-mvp.sos.texas.gov/MVP/mvp.do2. Apply to register to vote if you are not already registered. https://webservices.sos.state.tx.us/vrapp/index.asp3. If you don’t have a printer, stamp, or want to look up your county election office, go to Register2Vote and get a completed voter registration application sent to you to sign and put in the mail. This saves you some steps, but takes a little extra time, so do it today! https://register2vote.org/Social Media Posts to share: -Make sure you are registered to vote. Deadline to register for the Nov. 5 constitutional amendment election is Oct. 7th. #txed #txlege #vote #TxEdVote -Vote in every election. Make sure you are registered today! #txed #txlege #vote #TxEdVote 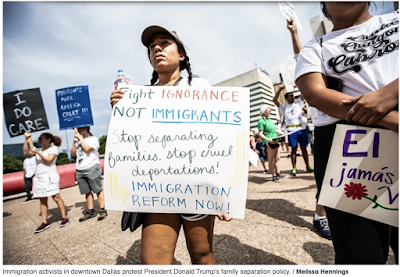 Texas' white plurality is this close to being over, according to data released Thursday by the U.S. Census Bureau. Any day now, it seems, the state is set to become majority Hispanic.
According to the bureau's 2018 population estimates, Texas has about 11.9 million white, non-Hispanic residents, compared with 11.4 million self-identified Hispanic residents. In 2010, the earliest year for which data is provided in the Census report, there were 9.5 million Hispanics living in Texas, compared with 11.4 million non-Hispanic whites.
While Hispanic population growth has easily outpaced white population growth from 2010 to 2018, the differences in growth over the last year are even starker. Texas' white population grew by about 24,000 residents in 2018. Its Hispanic population grew by almost 215,000.
Texas Hispanics' population growth has not been mirrored at the ballot box. According to Census Bureau data released earlier this year, about 1.9 million Hispanics voted in Texas' 2018 election, an increase of more than 800,000 from the state's previous midterm in 2014. That might sound like a big jump, but given that Texas' total turnout went up from under five million to more than eight million, Hispanic voters' relative electoral impact went up only about two percentage points, from about 23% of the electorate to about 25%.
White Texans are still over-represented at the ballot box, which is reflected in the policies pursued by Texas Republicans like Lt. Gov. Dan Patrick and Texas Attorney General Ken Paxton.
"Basically, I think you can contrast the Dan Patrick versus (former Texas Gov.) Rick Perry approach," Rice University political scientist Mark Jones told the Observer in 2018 in an interview about Hispanic political power in Texas and when it might flip the state. "If all Republicans were like Rick Perry, you wouldn't have a significant disconnect between obtaining a significant percentage of the Latino vote and the policies pursued by Republican officeholders. Perry was always very astute in avoiding issues that would've damaged his standing and that of the Republican Party among Latinos who otherwise would be favorably disposed to vote for Republicans. He always focused on border security. He never focused on anything that would've involved the deportation of Latinos already in the country."
With Perry out of office and President Donald Trump in the White House, Texas Republicans have become more extreme on immigration issues. During the 2017 legislative session, Texas lawmakers famously passed Senate Bill 4, the state's "sanctuary cities" law, which threatened local elected officials with being removed from office if they failed to comply with orders from federal immigration enforcement officers. This year, Texas Senate Republicans forced through a ceremonial but controversial resolution affirming Trump's claims that there is a crisis at Texas' Mexican border.
Republicans' continued focus on the border and demonization of immigrants is already having an effect on Texas' Latino electorate, according to activists.
"With the Latino community, it's always very interesting because there's a segment that's been loyal to the Republican Party specifically because of the abortion issue," Carlos Duarte, the Texas director of Mi Familia Vota, a group that supports civic engagement among Latinos, told the Observer just before the election in November. "People would say, 'I'm conflicted because, on the one side, I want to vote for Democrats because of their positions on immigration, but on the other, I want to vote for my soul and therefore vote Republican because of the abortion issue.'
"This year, what I am seeing is that people are fed up, particularly with President Trump, and I have had several conversations where people are saying, 'I used to be a Republican, I've been a Republican all of my life, my family has been Republican, but we cannot take this anymore and now me and my family are going to vote Democrat.'"
In 2018, 64% of Hispanic voters in Texas said they cast their ballot for Democrat Beto O'Rourke, according to Pew Research, compared with the 47% who voted for Democrat David Alameel against John Cornyn in 2014. White turnout saved Republican Ted Cruz, but there's a chance Republicans are mortgaging their future for marginal short-term gains.
"I think (Gov. Greg) Abbott still wants to try to occupy ground that is similar, if a little bit to the right, of where Rick Perry was," Jones said last year, suggesting the governor might moderate after Trump leaves office. "It's not clear at all to me that Dan Patrick and Ken Paxton are interested in doing that. I think they still have a much more short-term vision that's focused on Republican primary voters. They seem much less concerned about the future of the party. They're much more focused on winning in 2018 and perhaps winning the Republican primary in 2022 for whatever office that might be, but they're unconcerned about where the party will go in the 2020s."
Stephen Young has written about Dallas news for the Observer since 2014. He's a Dallas native and a graduate of the University of North Texas.
Posted by Angela Valenzuela at 7:39 AM