The Southern Strategy and Donald Trump by Dr. Mario Barrera

Check out this analysis by Dr. Mario Barrera on the power and limits of what today is know as the "Southern Strategy."  We can only hope and work toward a major defeat in the 2020 election of Donald Trump, and in the process, stretch the limits of this strategy to its breaking point.

Enough with this institutionalized form of electoral racism.


The Southern Strategy and Donald Trump 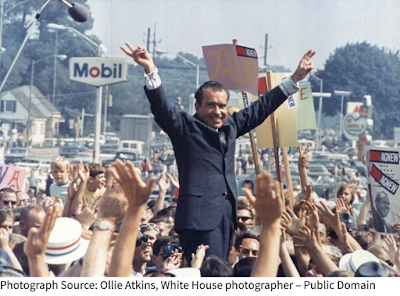 Contemporary Republican politicians like to invoke the legacy of Ronald Reagan to bolster their policies. However, the type of White nationalism being espoused by Donald Trump and his supporters more accurately traces back to two less appealing Republican personalities: Barry Goldwater and Richard Nixon, and to the backlash created by the Civil Rights Movement of the nineteen sixties.
It was the Civil Rights Movement that weakened the Democratic Party’s hold on the South, a hold that dated back to the post-Civil War period of Reconstruction. The Goldwater 1964 Presidential campaign took advantage of the opportunity by appealing to Southern White prejudice, and thus pioneered the “Southern Strategy” that was further developed by Nixon and has continued in effect to the present day. Goldwater’s opposition to the Civil Rights Act and his defense of “states’ rights” won him five Deep South states that had not gone Republican since Reconstruction. Donald Trump’s electoral “base” is of course not limited to the South, but it’s nevertheless true

that Southern and border states constitute the bedrock of the GOP today.
Trump’s innovation has been to transform what had been a coded set of racial and ethnic messages into a far more overt and wide-ranging array of appeals to racial and ethnic bigotry. These appeals have resonated with a White electorate which is increasingly anxious about the demographic changes taking place in the United States today, especially the increased visibility of non-White groups and of women. It seems more and more clear that Trump’s “Make America Great Again” slogan hearkens back to an idealized vision of pre-civil rights America where minorities “knew their place” and no one questioned the privileged position of White men.
Trump’s approach resulted in an electoral college victory in 2016 despite a decisive loss of the popular vote. However, this strategy led to a GOP loss in the 2018 mid-term election, which Trump insisted on making into a referendum on himself. In the process, the Republican Party has been transformed into a party with a constituency consisting largely of White males in rural areas.
It could be argued that Trump’s 2016 victory was mostly a fluke based on an unusually uncharismatic Democratic candidate (Hillary Clinton) and a highly inept Democratic campaign. An Obama or a Biden might well have defeated Trump and perhaps won a Senate majority as well. In effect, the Republican Party seems to have painted itself into a corner by embracing Trump’s White nationalist approach and his attempt to remake the party into a personality cult centered on himself. Unless the GOP can bring itself to reject Trumpism and return to its more traditional center/right identity, it’s difficult to see how it can avoid dwindling into a permanent minority party along the lines of the California GOP, which currently controls no state-wide office and only a small minority of legislative seats. A major defeat in the 2020 election may leave the national party with an excruciating hangover and a regret that it ever heard the name Trump.
Join the debate on Facebook
More articles by:MARIO BARRERA
Dr. Mario Barrera is Professor Emeritus of Chicano/Latino Studies at UC Berkeley. Among other publications, he’s the author of Race and Class in the Southwest (University of Notre Dame Press), which won an award from the American Political Science Association. He was one of the founders of the National Association for Chicana and Chicano Studies (NACCS). He was a producer of the documentary film “Chicano Park.”
Posted by Angela Valenzuela at 4:47 PM