Rick Hess Straight Up (RHSU) annually publishes in Edweek rankings of top influencers in education (see 2023 RHSU Edu-Scholar Public Influence: Top 10 Lists). Congrats to all 200 scholars that made the list, and particularly to my fellow colleagues in the College of Education at UT, namely, Dr. Stella Flores and Dr. Denisa Gándara for making it to the list.

My sense is that most of us aren't actually trying to make "the list," but rather that we're all working hard trying to influence positive change at multiple levels, meaning, local, school district, city, state, and national levels. Thanks to the RHSU team for doing the hard work of generating this annual list and thanks to the College of Education at UT-Austin for posting this notice. Getting acknowledged in this way is affirming, especially considering just how hard we all work. 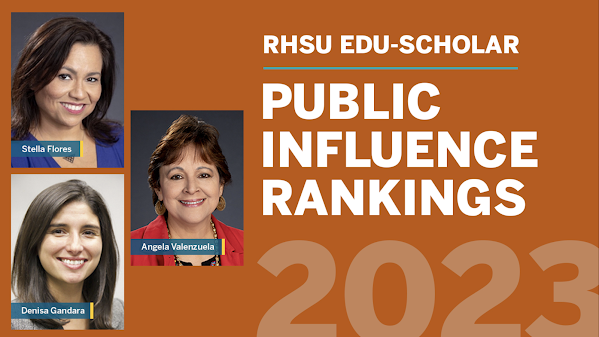 Each year, 200 university-based scholars make the list and are scored in nine publicly available metrics including their Google scholar score, book points, highest Amazon ranking, syllabus points, education press mentions, web mentions, newspaper mentions, congressional record mentions and Twitter score. According to RHSU, these rankings reflect, in roughly equal parts, the influence of a scholar’s academic scholarship and their influence on public debate as reflected in old and new media.

Stella Flores is an associate professor and examines the effects of state and federal policies on college access and completion outcomes for low-income and underrepresented populations including immigrant and English learner students.

Denisa Gándara is an assistant professor and examines the development of higher education policy decisions and the effects of these decisions on students who have been excluded from and underserved in higher education. An additional line of research she explores is how various approaches to funding colleges and universities might promote or hinder social equity.

Angela Valenzuela is a professor and specializes in urban education from a sociological and multicultural perspective, with a focus on minority youth in schools, particularly at the K-12 level.

David Yeager, associate professor in the Department of Psychology in the College of Liberal Arts, was also named to this year’s list.

Posted by Angela Valenzuela at 1:43 PM