I'll be posting a lot more than usual on policy and policy agendas to this blog in the coming weeks and months now that we're entering the 88th 2023 Texas Legislative session. Under the guise of House Bill 1006 by Carl Tepper (R-Lubbock), banning Diversity Equity and Inclusion (DEI) in Higher Education is on the table. According to this piece in the Texas Monthly by Dan Solomon, it does have a chance of passing considering the current policy climate that seeks to limit the teaching of race in K-12 schools.

I want to think that it's a little premature to say that this bill has a chance particularly since this involved higher education in a state that is in great need for diverse educational contexts so that the parallel needs of our state's highly diverse public can get addressed.  I would also hope that our higher education leadership at all levels vigorously defends this need for greater diversity, equity and inclusion. 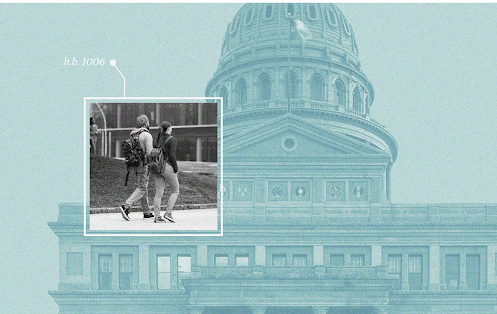 During the 2023 legislative session, which begins in January, we’ll be taking a close look at the notable—and, yes, silly—bills that come under the consideration of the august bodies that make up our state government to help you understand what your lawmakers are spending their time on.

What it would do: HB 1006 would make a number of changes to the Texas Education Code. Many of them are relatively minor, such as striking the words “serve the public” from the section outlining each institution’s responsibilities and tweaking a line about their duty to “transmit culture” to one about how institutions should “permit the diffusion of culture.” It also adds some new responsibilities to the list. One is to “foster a diversity of viewpoints” and “maintain political, social, and cultural neutrality.” And to a list of enumerated “expressive activities” protected by the First Amendment or the Texas Constitution it adds “published or unpublished faculty research, lectures, writings, and commentary.”

Most of these changes wouldn’t be substantive, and are meant primarily to signal values rather than to create strictly actionable parts of law. One part of the bill calls for a more substantial change, however, to a part of the education code outlining that “each institution of higher education shall adopt a policy detailing students’ rights and responsibilities regarding expressive activities at the institution.” The bill would add a clause that those policies must “demonstrate a commitment to intellectual freedom and viewpoint diversity,” and also that they must prohibit the funding, promotion, sponsorship or support of “any office of diversity, equity, and inclusion,” or any office that operates under another name but which supports the goals of diversity, equity, and inclusion. It also adds language to the code prohibiting “the endorsement or dissuasion of, or interference with, any lifestyle, race, sex, religion, or culture.”

What does all that esoteric jargon mean? In plain language, HB 1006 looks to ban publicly funded colleges and universities from advancing the DEI initiatives that have become increasingly common at such institutions. Those initiatives aren’t generally popular among right-wingers, many of whom see DEI as another oppressive liberal acronym, right up there with CRT (“critical race theory”), ESG (“environmental, social, and governance”), and BDS (“boycott, divestment, and sanctions”), all of which have been the subject of laws in recent legislative sessions.

How to square a bill that requires universities to “demonstrate a commitment to intellectual freedom and viewpoint diversity” and also bans establishing diversity, equity, and inclusion offices in any form? The key here is that “viewpoint diversity” is meant to refer to conservative views, and not views such as, “This university would be a more diverse, equitable, and inclusive place for all students if it had an office devoted to ensuring that students from marginalized backgrounds had additional resources to ensure that they receive equal opportunities on campus.” This is how you end up with a bill that seeks to expand “intellectual freedom” by creating new restrictions on what schools are allowed to do.

Does the bill have a chance of passing? Sure, this bill or something similar could certainly pass. In 2021, an anti-CRT bill, which restricted how race, slavery, and history could be taught in public schools, passed during a special session, just a few months after the passage of an anti-ESG bill that targeted financial firms that divest from oil and gas companies. (An anti-BDS law, which required all state contractors to pledge not to boycott Israel, passed in 2017, was rewritten in 2019, and was found unconstitutional by a federal judge earlier this year).

The Legislature enjoys passing this sort of bill, even if banning DEI offices in higher education wasn’t on Dan Patrick’s list of top priorities heading into the session.

Posted by Angela Valenzuela at 2:01 PM