Knowing Mexican American Civil Rights Movement history that, unfortunately, our textbooks do not include, remains vastly important if we are to fully understand the plight of Mexican Americans advocating for an equitable and just education and the broader implications of this struggle for us today.

Texas history—and the history of the Southwest, in general, where large numbers of students protested in the form of school walkouts, rallies, and community organizing led to much-needed policy changes the provide a model—among others like coalitional, judicial, and electoral politics together with legislative actions—for collective struggles today.

It's worth noting that Mexican American progress is inextricably linked to Latina and Latino progress, as a whole, as well as with that of all other groups of color. As a society, we ALL benefit from appeals to civil rights and are NEVER hurt by it. We only benefit when we live up to our highest ideals as a country.

Looking forward to seeing this play that features, in particular, the legendary Dr. Jose Angel Gutierrez' leadership, at the Guadalupe Cultural Arts Center in San Antonio soon. Go to this page for more information. Hurry up though since tickets are going fast. 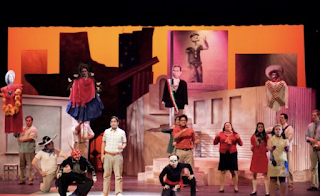 to join her school’s cheerleading squad.

She was automatically disqualified from applying. Only one Mexican

American cheerleader was allowed and the squad had already met its

The incident became the catalyst that led to a historic school walkout.

It was also about physical punishment students endured for speaking

Spanish, and about how Mexican Americans were often discouraged

from pursuing a college education.

The walkout was about discrimination and racism. 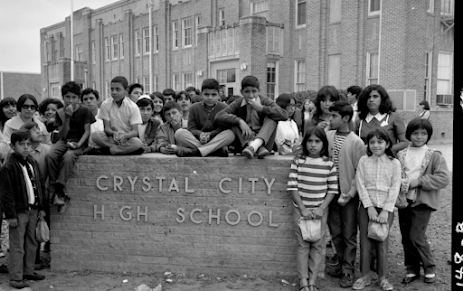 students, teachers, and law enforcement officials who lived through the

was eye-opening for students.

“They were just discovering this reality and putting the pieces together

had become normalized,” he said. “But as young people, they were

beginning to wake up to these differences and how they were treated.”

The Crystal City walkout was inspired by similar walkouts in Los Angeles,

Treviño, whose own uncle was a student leader of the walkout, said

“It is a universal story. It's a timeless story. It’s David and Goliath,” he said.

make a difference for their communities.”

See showtimes and information here. Some shows may already

Posted by Angela Valenzuela at 1:15 PM