Climate Change, Drought Conditions, and their Future Implications for Austin and Central Texas

Both Austin's "unseasonably warm" temperatures and erratic weather are becoming the norm. Our leaders at all levels seem indifferent to climate change and what we need to do about it in order to avert—or at least decelerate—the frequency of catastrophic weather events. This article duly warns us here in Central Texas that places like Austin and the Hill Country will turn into a dust bowl like so much of West Texas already has, including my hometown of San Angelo to which Austin is compared herein. 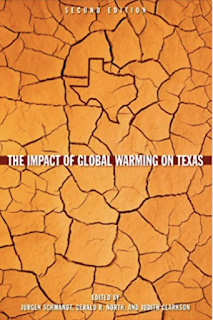 If anyone keeps up with Texas drought statistics, 2022 ranked second driest in 11 years, a terrible year that devastated Bastrop County with fires on Labor Day weekend.

As someone like myself who likes to garden and who is also concerned about the environment, this Statesman piece with its tongue-in-cheek title, sounds the alarm on climate change. It refers not to some far-away land, but right here where we live.

I recommend reading David Wallace-Wells titled, "The Uninhabitable Earth"—also available on Audible.com.  Jess Goodell's piece titled, "Hothouse Earth Is Merely the Beginning of the End," featured in the Rolling Stone, is also informative. Without a doubt, we in the U.S. have a special responsibility to address climate change due to our excessive carbon footprint that's killing the planet.

It also references an authoritative volume written by hemispheric scientists in 2011 published by the University of Texas Press titled, The Impact of Global Warming on Texas, now in its second edition. It goes into depth on what holds for the future of Central Texas while recommending corrective action for policymakers if we are to avert the unthinkable—that is, consequences that are no longer manageable.

'If you die, you will be replaced by a succulent.' How 2 Texas gardeners handle heat, drought 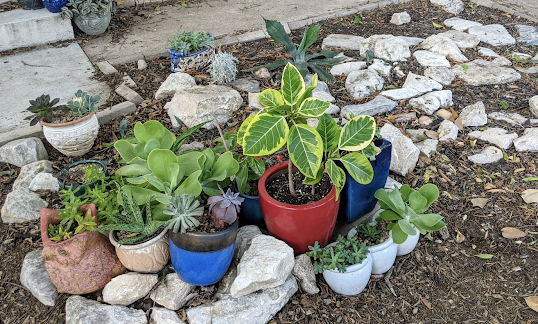 Just a few months ago, a deep freeze struck some Austin gardens to their very roots.

Now those precious plants are dealing with historic heat and the threat of longterm drought.

At this point, Austin yards are taking on a crispy golden hue that looks more like late August or early September than mid-July.

Climate change is not helping.

In 2011, during a previous devastating Central Texas drought, one scientist predicted that, within a couple of generations, Austin would look more like the West Texas city of San Angelo than our comparatively green hills and wooded prairies of Central Texas.

Toward the end of the century, Austin "will be a lot like the Dust Bowl," said Gerald North, a Texas A&M University atmospheric scientist and an editor of the book, "The Impact of Global Warming on Texas."

Just so you know, San Angelo can get so dry that, in the early 1970s, one of its reservoirs caught fire.

"Within the next century, hotter weather in Central Texas will lead to longer droughts, the amount of water making its way into the Edwards Aquifer will drop," reported environmental writer Asher Price in the American-Statesman in 2011, "crops may wither, wildfires might grow more frequent, and the tree line that divides lush East Texas and bone-dry West Texas — it now sits along Interstate 35 — might push east, Texas research scientists and academics predict."

Yikes! What's an Austin gardener to do with this unhappy news?

On April 1, after this year's freeze, two gardening enthusiasts on our Austin360 staff, Deborah Sengupta Stith and Michael Barnes, shared some hard-won plant wisdom under the headline: "Want your garden to survive Texas freezes, floods, heat, droughts? What to plant and when." Sengupta Stith employs containers in her shady East Austin yard to echo the planned naturalness of an English garden; Barnes concentrates on trees, shrubs, vines and ground cover — along with a few herbs and veggies — at his South Austin home.

They are back to answer questions on how they have adapted — or plan to adapt — their gardens to the heat and the drought. We've also asked an expert from San Angelo to give advice on long-range planning, as climate change transforms Central Texas into something more like West Texas.

What are you doing right now to protect your most vulnerable plants?

Sengupta Stith: Honestly, not much. I have a small assortment of unusual philodendrons and monsteras — survivors of my early pandemic indulgence in the collector houseplant craze — on my shady balcony. Those guys get watered almost daily. I treat everyone else to a few waterings a week plus a stern warning: "If you die, you will be replaced by a succulent."

I have many new succulents.

Have I lost plants that I loved with this approach? Absolutely. The side of my house is littered with empty pots. But I'm a big believer in trying to work with the environment and I'm not willing to fight for something that is not suited to these harsh conditions that are starting to feel like the new normal for Central Texas gardeners. I am only here for the tender tropicals that survive my willful neglect.

Barnes: Potted plants are the most vulnerable, I think, because they bake in their terra cotta. The herbs are particularly hard hit this time of year. The potted succulents and some ferns are survivors, at least during this summer.

I've increased my watering rotation. We've lost probably a half dozen small, recently planted shrubs. One was a tropical that I knew had no business in our ground, but it winked at me at the neighborhood nursery. I still haven't learned to avoid "impulse planting."

On an upbeat note, this is the time of year when all that spring mulching and composting benefits the entire garden by preserving moisture in the soil.

How are your mature trees holding up?

Sengupta Stith: We have hundred-year-old pecan trees. So far, they seem to be fine, although I'm sure they would appreciate a good trim.

Barnes: Our old pecans, too, are untouched by the heat and paucity of rain so far. Their roots run deep into the water table. Plus, we live about a block from a creek, with a gentle slope in that direction, so despite the rockiness of the terrain, there's enough accumulated soil to soak up moisture.

The smaller ornamentals — anacacho orchid tree, possumhaw holly, tall Will Fleming yaupon, various laurels and a locally bred Shoal Creek chaste plant — have not suffered too much yet. The bay laurels, in fact, are making a major comeback after the 2021 freeze.

Do you hand-water your gardens, and if so, why?

Sengupta Stith: Yes. I have a small yard and I do a lot of container gardening. Puttering around my garden with a hose helps keep me grounded. I appreciate the opportunity to check in with my plants. It feeds my gratitude practice. Having said that, it also reinforces my tough love approach to thirsty plants. I'm not trying to get out there more than a few times a week.

Barnes: I hand-water for the peace, but also to check up on everything. It does not take that long to accomplish a good hand-watering early in the morning. Often, I'll do the front zones one day, the back the next day, then skip a day or two. I'll also turn the hose on myself on the hottest days.

Have you set up any new shade in your garden this summer?

Sengupta Stith: Shade is not an issue in my yard. My yard is so shady that my wonderful neighbor let me set up a vegetable garden in his yard, which has ample sun. If I was a handier person, this would definitely be the year that I set up a shade cloth to protect the garden from the afternoon sun, but, alas, I am not that person.

Barnes: We'd only set up a shade device for our peppers and some of our more delicate herbs, but we haven't got around to it.

So what types of plants seem to be thriving (or at least surviving) without much help?

Sengupta Stith: I've said it before and I'll say it again: Pride of Barbados and esperanza are the stars of my Texas garden. Both are full sun plants, so mine have to stretch a little, but they've been blooming beautifully despite the fact that I barely water them at all.

My well-established Rose of Sharons are doing surprisingly well and my golden thryallis, firecracker bush, Turk's cap and shrimp plants all look very good. The aloes and agaves all seem to be living their best lives.

Barnes: Pride of Barbados are the best, aren't they? As I write this, I can see one blazing orange-yellow in my neighbor's yard.

This was the year we were going to add one to a sunny spot, but we — I — got distracted at the nursery. They are all over our hood, along with plumbagos, desert willows, lantanas, esperanzas and acacias, which I started noticing in clusters about 30 years ago. In past years, we have enjoyed all of these happy plants in our garden, although none currently. I don't know why.

Our surprise winners of this summer are the lavenders. Kip planted three varieties in two mostly sunny beds. They have grown pretty quickly. They lap up the sun and don't need much water, not unlike the nearby salvia, which bloomed beautifully this year. Our Turk's caps and firecracker plants are also doing quite well. We've had no shortage of hummingbirds and, earlier, butterflies.

The sad news: Our grand champions for all seasons and reasons, Texas mountain laurels, led to unexpected domestic trauma. Our new dogs, Coal and Pepper, are littermates, 2-year-old black-and-white Lab mixes, very curious and rambunctious. Both chewed into the dark brown mountain laurel seeds, which contain neurotoxins at their orange centers. Those brought on seizures. One had to make a trip to the puppy hospital after five seizures in one hour.

We stripped off the seeds, cut down the two beautiful specimens in the back garden, uprooted one, raked the ground, then laid out weighted tarps. We kept the two mountain laurels up front, off limits to the doggies. Take those warnings about pet toxins seriously.

Vegetables and herbs can wither or bloat in this heat. How are yours doing?

Sengupta Stith: Food plants are my weakness as a gardener and any confidence buoyed by last year's bountiful tomato harvest has been devastated by this year's shriveled up plants. I was giving away yellow tomatoes by the dozen last year. This year, the same variety of plant produced exactly three tomatoes and then promptly died. I do have one enthusiastic okra plant, a basil starter that grew into a small bush and a surprisingly productive bell pepper.

Posted by Angela Valenzuela at 10:30 AM