Thousands of Central Texas students Rally, Stepping out of class tomorrow at 10AM

Thousands of Central Texas students rally for gun safety, stepping out of class tomorrow at 10AM.  They gather first at Wooldridge Square located at (900 Guadalupe St., Austin, Texas 78701) and then make their way to the Texas State Capitol.  I hope that adults at school honor them and allow them to do this.
Angela Valenzuela 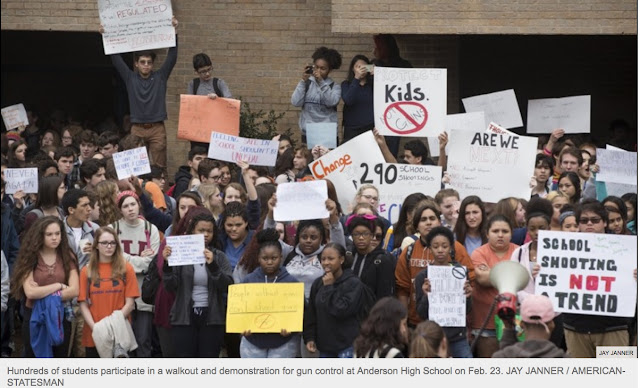 Central Texas students will walk out of their schools between 10 a.m. and noon.
The event marks the 1999 Columbine High School massacre anniversary, one of worst U.S. school mass shootings.
Students will gather at Wooldridge Square before joining Texas Capitol Walkout for Gun Safety rally.

When LASA High School sophomore Emma Rohloff hears about another school shooting, she isn’t so much scared or angry anymore as she is tired.
She’s tired when she hears what she says is rhetoric about why there shouldn’t be stricter gun laws. Tired that nothing more has been done to stop gun violence.
At 15, Emma is one of Austin’s organizers of the latest National School Walkout, the latest in a string of student-driven protests fueled by the February high school shooting that killed 17 people in Parkland, Fla. Planned for Friday, the event is timed to the anniversary of the Columbine High School massacre in 1999, when two teens killed 12 students and one teacher before killing themselves in one of the worst school shootings in U.S. history.
As they have during other local and national walkouts, students across the country on Friday will call for safer schools and action against gun violence.
“There will always be angry people who will take out their aggression on strangers,” said Emma, who wants a ban on civilian use of semiautomatic weapons. “A knife attack is going to be less deadly than a mass shooting. If we can take a step to reduce the number of lives lost, that is a step we should take.”
Last month, in the strongest show of force to date, tens of thousands of protesters took to the streets and rallied for stricter gun laws during the March for Our Lives rally. An estimated 20,000 participated in Austin.
WATCH: Matthew McConaughey speaks at March for Our Lives rally in Austin
While the organizers of Friday’s rally don’t anticipate so large a turnout on a weekday, thousands of Central Texas students will walk out of class.
Multiple schools will time the walkout to the 10 a.m. national call, providing time for speakers and observing 13 minutes of silence in honor of the 13 killed at Columbine. Other students are chartering buses (with money they raised that also paid for city permits and PA system speakers) and will immediately depart their campuses and join other students participating in the Texas Capitol Walkout for Gun Safety, at which students, educators and politicians will speak.
“Gun safety is an issue that effects everyone in America, especially students,” said Olivia Hoffman, a 14-year-old freshman at Austin High School. “We’re hoping to incite legislative action and show everyone teenagers are a political force that people need to pay attention to. We are the future leaders of America.”
Hays High School sophomore Vince Johnson, 16, will walk out with about 100 students at his school.
“I don’t like the idea that a school is an unsafe place for kids,” he said. “It’s a place of education, a place of community, a place where people can be together. The idea that the modern high school has been so plagued by gun violence … it’s unthinkable to me.”
The Capitol rally starts at 1 p.m. Students will gather at Wooldridge Square to make posters and signs before walking the few blocks to the Capitol.
Austin High math teacher Steve Trenfield will march alongside them.
“There are some things bigger going on than Algebra II,” said Trenfield, who has taught for five years, including three at Austin High. “This is a time we need to stand up and be heard. What’s happening in our schools around the country is unacceptable.”
Every time there is a lockdown or a school shooting, Trenfield is burdened with thoughts of how he would handle the situation if it were his school: “I’ll do my best if something should happen, but feel like there should be a bigger response from the government because this is a national epidemic.”
Stony Point High School Principal Anthony Watson also will walk alongside his students, not as part of the protest, but to ensure their safety as they walk to U.S. Rep. John Carter’s Round Rock office to deliver a school petition calling for gun reform.
“I want to be with them in case they are met with resistance in any form,” Watson said. “I’m just glad our kids know that to be respectful and responsible is the way to get things done. They’re just trying to have a voice. Whether I agree or not, whatever side they’re on, I’m all of their principal. I can’t give them my endorsement, but they have my help if they need it.”
School districts largely are handling the walkouts with no disciplinary action beyond giving the students unexcused absences, so long as the protests and rallies remain peaceful. Teachers and other staff members are not allowed to participate in their official capacities and therefore must take a personal day if they plan to rally.
“We believe finding their voice is an essential part of our students’ preparation for college, career and life,” Austin school Superintendent Paul Cruz said. “We recognize that emotions are charged in regard to school violence, and we respect the different perspectives of both our students and employees. … Creating an environment where we can support our students with positive and open conversations is key to helping them deal with uncertainty.”
Posted by Angela Valenzuela at 10:48 PM