OPEN TO THE PULIC

Our Academia Cuauhtli students are graduating!

This is our most fun and amazing weekend event! Check out the flyer for Friday and Saturday event details.

On Friday evening, we are delighted to feature super talented, world-renowned Texas A & M Kingsville Professor Dr. Gilberto Soto. On Saturday, he will be our commencement speaker.  Bring your flats or tennis shoes so that you can participate in his performance art (scroll down to read some of his many accolades).

Thanks to all of our co-sponsors for helping us out with this as follows:

Thanks, as well, to our benefactors, including Manuel, Jane, and Mary Zuniga Johnson and the Austin Area Association for Bilingual Education.  We are so blessed to have your support.  And thanks to the many volunteers, especially Sandra Rojas-Telles, Anthony Martinez, Randy Bell, and Marina Islas for making this possible.  Assistance from Sophia Mir, Alicia Guerrero, Irene Gomez, Arinda Rodriguez, Maria Unda Segundo, and Emilio Zamora is also deeply appreciated. 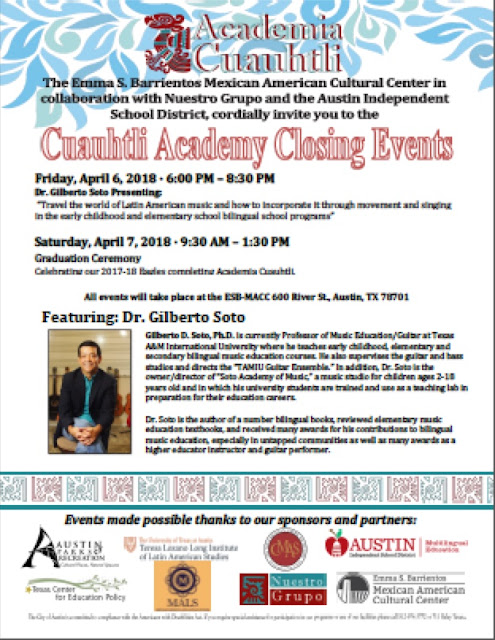 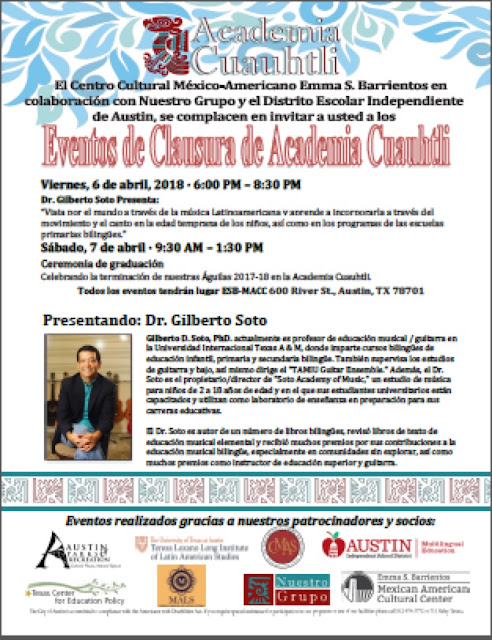 Dr. Soto is also the author of “Music of our World: Mexico”, “Teaching Music in the Multicultural Early Childhood Classroom”,  and has written several articles to the national music education magazine “Music Express”, reviewed elementary music education textbooks, and some of his publications have been featured at the prestigious television network CNN International.

Dr. Soto’s publications have been adopted in public and private school districts, not only all over the United States, but in Europe and the Middle East, and some of his bilingual song arrangements and lesson plans have been translated in Mandarin, with the intention to publish translated versions of his songs, music lesson plans and activities in The Republic of China.

He holds a BA degree in Education from Universidad Autonoma del Noreste, a BA in Music from Abilene Christian University, plus a M.M. and Ph.D. in Music Education from the University of Southern Mississippi. Dr. Soto travels extensively offering hands on clinics and lectures in bilingual music education to several of the most prestigious education conferences and school districts.

Dr. Soto also performs flamenco and classical guitar concerts throughout the United States, Central and South America, including the White House in Washington, and recently in Spain and at the Middle East. Some of his guitar arrangements and compositions have been featured at NPR national radio station. Dr. Soto has received many awards for his contributions to bilingual music education, especially in under priviledged school communities as well as many awards as a higher education professor, administrator and guitar performer.

Posted by Angela Valenzuela at 12:15 PM