As teachers strike in other states, Texas teachers are also unhappy 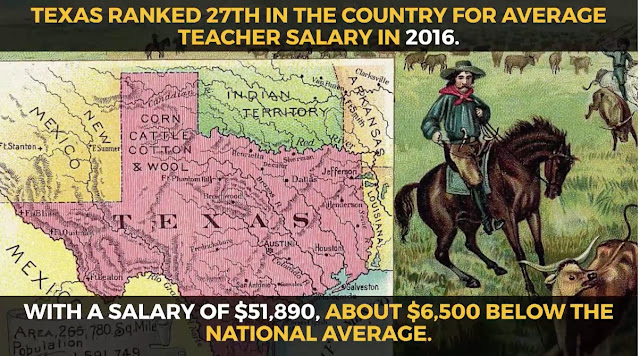 Texas ranked 27th in the country for average teacher salary in 2016.
The state hasn’t changed the amount it contributes in teacher health insurance in 15 years.
Although there’s little indication Texas teachers will go on strike as their colleagues in other states have done, Texas educators have long been unhappy with how the Legislature funds public school, affecting their pay and benefits.
Texas was 27th in the nation for teacher pay in 2016, according to latest data available from the National Education Association. That year, the average teacher salary in the state was $51,890, about $6,500 below the national average.
Salaries and benefits typically make up the largest parts of school districts’ budgets. School district officials often say they can’t afford pay raises because the state’s school funding formulas are outdated and don’t provide sufficient dollars to schools.
“I think that the same anger that is bubbling up in those states is bubbling beneath the surface here in Texas,” said Louis Malfaro, head of Texas’ chapter of the American Federation of Teachers.
READ: A third of Texas teachers must work second jobs, survey says
The outdated formulas have also led to the Austin school district becoming the biggest payer under the recapture system in which property-wealthy school districts must send money to the state to be redistributed to property-poor school districts. The Austin school district is estimated to send $534 million in recapture money to the state. Relying on growing local property tax revenue has allowed the state to reduce its funding share for public education over the last decade.
State lawmakers have not substantially changed the school funding formula in many years. A state commission is working on making recommendations on how to fix the school finance system to the Legislature by the end of 2018.
State lawmakers also haven’t increased the $75 monthly contribution the state makes to teacher insurance premiums in 15 years. Under the law, school districts must contribute $150 each month, leaving teachers to pay an average monthly health insurance premium of $326, according to a survey by the Texas State Teachers Association in 2016.
Lt. Gov. Dan Patrick last year proposed giving teachers a $10,000 pay raise but state lawmakers couldn’t agree on a way to pay for it. Public education advocates have accused Patrick of trying to funnel money away from traditional school districts to charter and private schools.
“There’s a crisis in leadership in the state right now around education. Texas has done some really good stuff, set some high goals,” Malfaro said. “And yet, there’s no one out there who holds statewide office who is a true leader on a public and higher ed.”
Posted by Angela Valenzuela at 8:47 PM