25 maps that explain the English language by Libby Nelson

On the subject of the English language, do check out this link.  While it is the case, on the one hand, that languages that don't absorb changes die (see previous post), it is also simultaneously the case that languages that change, incorporating other languages, are strengthened even if they're profoundly impacted.  Stated differently, language purity is a myth.

Think about this the next time that you hear anyone say that someone speaks "perfect English" or that we need to "work hard to preserve the English language." Aside from ignorance, these expressions are more about white supremacy than anything else.  Language is code for power and adhering to the status quo—which helps to explain why despite the norm nearly everywhere else in the world, English monolingualism is policed and reproduced in this country.

This is a great resource with amazing maps for the language classroom.

25 maps that explain the English language

English is the language of Shakespeare and the language of Chaucer. It’s spoken in dozens of countries around the world, from the United States to a tiny island named Tristan da Cunha. It reflects the influences of centuries of international exchange, including conquest and colonization, from the Vikings through the 21st century. Here are 25 maps and charts that explain how English got started and evolved into the differently accented languages spoken today. 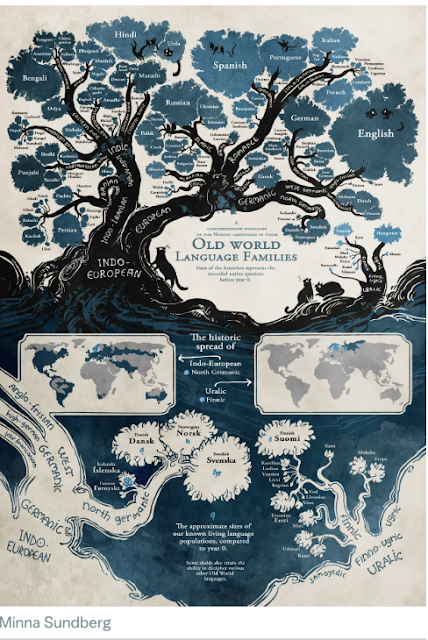 Posted by Angela Valenzuela at 12:40 PM