As most of us are just living our lives, the Texas GOP is feeling the stress that comes with demographic and political change.  All eyes are on Texas now.  Let's turn our state blue, my friends!

Should Democrats flip the lower chamber, they'll play a role in redrawing the state's congressional and legislative maps. 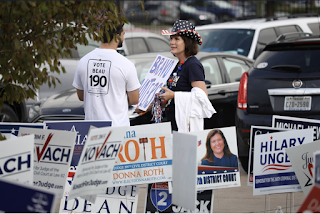 In June, Texas state House Speaker Dennis Bonnen took a meeting with a conservative activist to discuss a possible deal: media credentials for that activist's organization in return for assisting Bonnen in defeating a handful of fellow Republican lawmakers in next year's primary.
A scandal and a lawsuit — brought by Texas Democrats alleging that Bonnen ran afoul of campaign-finance laws — ensued. And while strategists note the episode is unlikely to damage GOP prospects in 2020, especially with President Donald Trump at the top of the ticket, a secret recording of the meeting revealed a rattled Republican Party struggling to counter Democratic hopes of turning the state into a battleground.
"The whole meeting's premise was that the different factions of the Republican Party and the conservative movement needed to find a way to band together to defeat Democrats in 2020," Brendan Steinhauser, a Texas Republican strategist and campaign veteran, told NBC News.
"The threat of Texas turning blue had a lot to do with why this meeting happened in the first place," he added.
Changing demographics, an influx of young professionals from outside the state and difficulties for the Trump-led Republican Party in the state's suburbs in 2018 have contributed to Democratic optimism up and down the ballot. Though defeating Trump remains a tall task, the recording, released two days ahead of Trump's planned campaign rally in Dallas, highlights a key fight for control of the legislature's lower chamber ahead of a high-stakes redistricting process that hinges on the results of the 2020 census.
"I just think we've got to get through 2020, guarantee if we try and hold this majority — which, with all due respect to Trump, who I love, by the way — he's killing us in urban-suburban districts," Bonnen said in June, according to the recording made public by the activist, Michael Quinn Sullivan. (Bonnen has denied any wrongdoing and claimed vindication that he did not act untoward in the meeting in light of the tape's release.)
Democrats, who haven't controlled the state House since 2002, already made inroads there in 2018, picking up 12 seats. Kier Murray, a longtime Texas Democratic strategist, told NBC News that Bonnen's meeting with the activist put on display the "discord" that's existed between more conservative Republicans and the "business establishment types" for some time.
"They've largely been able to keep those problems inside the tent over the last few years, but they're not able to do it anymore," Murray said. "And I think it's somewhat reflective of the stress they feel generally about the state and losing their grip on it, that they're starting to fight among themselves."
U.S. Rep. Brian Babin, R-Texas, called hanging on to the majority in the state House in 2020 "extremely important" because of the voting maps.
"I think it'll be a big deal, I really do," Babin added. "I'm old enough to remember when the Democrats held sway in the state of Texas, 100 percent nearly. Of course, as the Republican Party grew, redistricting became a very, very important issue. Now that the Republicans have the majority, and we control the redistricting lines, I think it's all important.
"Each state is going to draw those lines to the benefit of their majority party. I think it's going to be an extremely important issue that is going to be hinging on whether we continue to have the majority in our state government, in the state House."
Murray told NBC News that flipping the state House would give Democrats the ability to put redistricting front and center in the next session.

Posted by Angela Valenzuela at 9:23 AM