This piece is chock-full of important information related to redistricting in Texas, beginning with the cry to end gerrymandering such as what happened to Travis county after the 2010 census.  Instead of being the strong Democratic county that it ought to be, it was fragmented into five congressional districts, with only one of these being Democratic.  That does not represent our city or county that tends to be more liberal than conservative, thusly diluting our vote.

To support representative Democracy, still a very good idea, we all need to get involved in the next legislative session that will be dominated by the redrawing of political lines.  In anticipation of that, we need to make sure that everyone is counted in the U.S. Census.

Texas has grown by an more than 5 million people since the last Census count in 2010 such that our state will grow in Congressional strength, adding at least three more seats for our state—from 36-39.  almost 30 million when the next census is taken, up from 25.1 million people counted in 2010.

Texas currently has 36 seats in the U.S. House, but population growth is expected to add at least three congressional districts for the state.

According to another piece authored by Alexi McCammond that I just posted titled, The first-time Latino voters, "The 2020 election marks the first time in history that Latinos will be the largest minority ethnic or racial group in the electorate, with 32 million eligible voters."

For the sake of our communities, let's all register to vote and then let's actually vote. 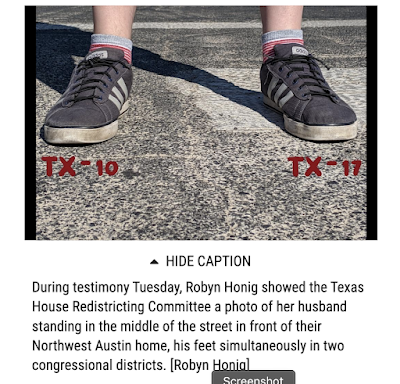 The touchy process of redrawing political districts based on the upcoming census opened Tuesday with a Capitol hearing that produced frequent pleas to end gerrymandering, particularly from residents of an intentionally fragmented Travis County.
Many Austin-area residents who testified before the House Redistricting Committee condemned the map, drawn after the 2010 census, that broke the strongly Democratic county into five far-flung congressional districts, four of which are represented by Republicans.
The result, several said, has been artificially split communities, diluted political clout, created apathy in voters and focused representatives on other parts of the state, not Austin.
Robyn Honig held up a photo of her husband standing in the middle of the street in front of their Northwest Austin home, each foot in a different congressional district.
“Do the three congressional districts shattering my neighborhood keep with the spirit of representative democracy, or were they drawn in the spirit of something else?” Honig told the committee. “It’s time for all of y’all to put an end to this nonsense.”
Matt Miller asked that the next congressional map, to be drawn during the 2021 legislative session, include a district that allows most of Austin to be represented by one U.S. House member.
Residents of San Marcos, Kyle, Buda, Killeen and the Hill Country also reminded committee members that the district maps divided their communities as well.
Tuesday’s hearing was the first of 28 that the committee, with eight Republicans and seven Democrats, plans to hold across Texas, with more likely to be scheduled, said Rep. Phil King, R-Weatherford, chairman of the committee.
A second redistricting hearing will be scheduled next year in Austin, King said.
Redrawing political lines, always a time consuming and highly political process, will dominate the next 140-day regular session of the Legislature.
Redistricting committee members will be pulled in multiple, sometimes conflicting directions — pressured by incumbents who want safe districts, political insiders who want certain politicians elected or defeated, and party officials who want to maximize the number of seats earmarked for the majority party.
The political party in charge essentially draws the political maps that will be used in the coming decade for the Texas House and Senate, the U.S. House and the State Board of Education.
Right now, Republicans hold a 19-12 advantage in the Texas Senate, with little opportunity for major changes in the upcoming election. In the 150-member House, however, Democrats could become the majority party by flipping nine GOP-held seats.
With command over redistricting as the prize, the 2020 elections will be hotly contested because the party in power at the start of a decade can reap long-term rewards:
• Using GOP-drawn maps for Congress in 2018, Republican candidates received 50.4% of the votes cast in Texas but won 63% of the seats, according to the League of Women Voters.
• Texas Democrats running for Congress in 1992, when their party drew the maps, got half of the votes cast but won 70% of the seats.
Those redrawing the lines also know that federal judges will be reviewing their work.
Courts have cracked down on Texas-drawn maps every decade since the 1960s for violating the Voting Rights Act’s restrictions on diluting minority voting strength and gerrymandering along racial grounds.
What won’t be available in the future, thanks to a U.S. Supreme Court ruling in June, will be legal challenges based on maps that confer an outsized electoral advantage to the political party in charge. The propriety of political gerrymandering is a political question that does not belong in the federal courts, that ruling said.
At Tuesday’s hearing, many of the speakers pressed for the creation of a nonpartisan commission to draw political boundaries, arguing that politicians had an unacceptable conflict of interest in drawing their own districts.
King said, however, that several bills to create such a commission failed to gain support in the session that ended in May, leaving no time to change the process when the Legislature next meets.
The committee also heard from Lloyd Potter, director of the Texas Demographic Center, who said Texas is expected to have a population of almost 30 million when the next census is taken, up from 25.1 million people counted in 2010.
Texas currently has 36 seats in the U.S. House, but population growth is expected to add at least three congressional districts for the state when the 435 House seats are officially apportioned Dec. 31, 2020, Potter said.

Posted by Angela Valenzuela at 2:44 PM