Great news, my friends—especially those of you that are health nuts.  Here's something I've intuitively known.  Scientific research shows that voting and civic engagement are good for your health! 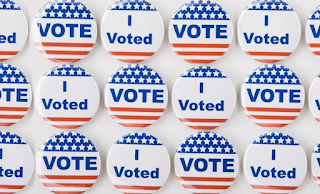 Voting isn’t just good for the country. A new study reveals that adolescents and young adults who are civically involved also tend to have better health.In the new study, published Tuesday in the journal Child Development, researchers analyzed data from 9,471 adolescents and young adults between ages 11 and 20, who were surveyed in 1994-1995 and followed for nearly 15 years. They found that young people who engaged in any of three activities—volunteering, voting or activism—were more likely to have a higher income and education later in life than those who did not. People who volunteered and voted were also more likely to be in better health.
People who reported volunteering and voting were more likely to eat in a healthy way and have fewer depressive symptoms than their peers who didn’t. But people who were involved in activism, despite also having higher incomes and education attainment later on, were also more likely to engage in risky behaviors like substance abuse.
“Civic engagement is a productive experience for young people,” says study author Parissa Ballard, assistant professor of family and community medicine at Wake Forest School of Medicine. “The findings on volunteering and voting were uniformly positive.”
The study is one of the first to look at the potential health benefits of voting. Other studies have linked volunteering to better health outcomes like fewer symptoms of depression, better self-reported health and even a lower risk of early death. “Volunteering might affect health by allowing people to feel good about themselves, to feel like they matter, to experience social connection and decreased loneliness, and to feel satisfaction from contributing to others,” the study authors write.
Activism, Ballard says, can be a bit more controversial. The researchers defined activism as being involved in a march or rally, and noted that while volunteering and voting are widely accepted norms, activism is often done in opposition to something or for the promotion of social change, which may be why it wasn’t linked to better health.However, it’s possible to make protesting a more positive experience, Ballard says. “Help young people find meaningful opportunities in their communities and manage expectations about what activism is about, and that the change might take a long time,” she says. “Help people recognize the small wins along the way in order to not get burned out.”
Ballard says she wants to continue researching the health benefits of civic engagement, especially since more people are getting politically and socially involved. “What motivates me is how this has benefits for individuals and the community,” says Ballard. “We can promote adolescent health by getting them involved, and in turn impact their communities.”
Posted by Angela Valenzuela at 9:09 AM