It really is unfair to Mexican Americans and other brown people that they should be expected to know Spanish when this has been mostly denied to us in this country, particularly as non-immigrant, Mexican Americans—who are, of course, the largest share of all Mexican-origin peoples.

I can speak personally to how this is frequently a painful experience to see not only others' expectations frustrated or disappointed, but to hold oneself up to these same expectations when the support for Spanish is intentionally, via language policy, not there either in the classroom, workplace, social media, or society, as a whole.
And then we're even more shamed when non-Latinos—because of their travels abroad or the benefits from a dual language education program—speak Spanish fluently. This despite the fact that for so many of us, as well, our childhood tongue, our first language, is Spanish. I wrote a whole book about this titled, Subtractive Schooling, that I encourage you to read if anything like this describes you—or even if it doesn't so that you can be informed about the complexities of the situation.

Sadly, most Latin@ children in this country are on the receiving end of implicit and explicit messages that their Spanish and identities are wrong—when nothing could be further from the truth! As suggested herein, when their identities and speech are hybridized, the world is that much more nuanced and rich.

For these reasons, speaking, reading, and writing in Spanish has been a lifelong project for me. Career-wise, as well. I advocate with others in my community to extend language rights and opportunities to children and local, district, and state levels. This is and continues to be a Mexican American Civil Rights agenda supported by pretty much all of our national, Civil Rights organizations (e.g., LULAC, MALDEF, LatinosUS, National Association for Bilingual Education [NABE], and the National Latino Education Research and Policy Project [NLERAPP]).

To help at least some children to not have to endure the pain and humiliation associated with unfair societal expectations, on the one hand, and to celebrate bilingualism and multiculturalism, on the other, we founded a Spanish language revitalization project, a Saturday school named Academia Cuauhtli (Eagle Academy), in Austin, Texas. We want our children to value and speak the Spanish language and for our families to be supported in this way. We also want them to think critically about the many social and historical forces that have worked to delimit our power as individuals and as a community and how to struggle effectively against this.
Another point related to this piece below is that the very concept that there is a pure language is false. Languages that are pure die. Remember Latin? Esperanto? With some estimates as low as 20%, only up to 33% maximum of English is derived from Old English. We don't think about it that way, but we're always "code switching" just speaking the English that we speak. Thanks to Noelia Cortez for sharing. -Angela Valenzuela 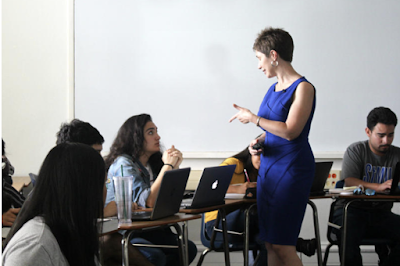 College freshman Angie Bravo’s first language is Spanish, but she wishes she were better at it.


The 18-year-old grew up in Laredo, Texas, just across the border from Mexico. Like many of her neighbors, she speaks a version of Spanish influenced by English.

Listen
Listening...
3:27
“I think the one that judges me the most is myself, because I want to be able to practice Spanish and be able to carry a conversation fully within Spanish,” Bravo said in late September, standing outside her Spanish class at St. Mary’s University in San Antonio.


Even in a state like Texas, where nearly 30% of the population speaks Spanish at home, there’s a perception that it’s better to speak “pure Spanish.”


But, as Bravo is learning this semester, there’s nothing wrong with the way she speaks the language. It’s just a different dialect than the one spoken in Madrid or Mexico City.
A Dialect Like Any Other
Instead of focusing on grammar and vocabulary, St. Mary’s University’s Cultural Spanish for Heritage Speakers class covers the history and culture of U.S. Spanish, the dialect commonly called Spanglish.
Professor Meghann Peace set up a recent lesson by asking students to match Spanish words with their languages of origin: Greek, Latin, Arabic, indigenous American tongues.
“What history teaches us is that the only constant is change,” Peace said in Spanish. “Whenever two languages have geographic contact they’re going to influence each other.”
She showed the class quotes about Spanglish from poet Octavio Paz and literary critic Roberto González Echevarria — Paz called it “abominable”; Echevarria called it an “invasion” — and asked the students if they ever get negative reactions like that when they speak in Spanish. 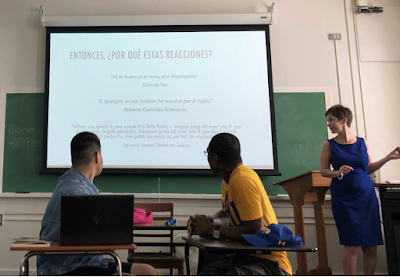 Mary Villines said people who only speak Spanish or English sometimes assume she doesn’t speak their language well if she code-switches.
“But what bothers me is that they only speak one language,” Villines said in Spanish. “Who are you to correct me when you don’t even know what I’m trying to say?”
Peace said that people who speak Spanglish actually know both languages well.
“Spanglish is super systematic,” Peace said in Spanish. “Someone who switches between languages in a single sentence follow the syntax rules of both languages.”
Language and Identity
That explanation resonated with Bravo, who said the class is starting to change her opinion of the way she speaks Spanish.
“It's taught me to be a lot more accepting,” Bravo said. “I'm still aiming to be able to carry a full conversation in Spanish … but I didn't really take into account the rules that we don't speak about, but we understand.”
For her, language is intertwined with the changing way she sees herself.
“When I was growing up, I had a lot of issues being Hispanic. I didn't understand, like, what does it mean to be Hispanic? Should I be Hispanic? Or should I be American? And so I think it's because I struggled with that, that I want to be able to do both,” Bravo said. “To be able to speak Spanglish is to be able to say to people that I am Mexican American, and that's okay. I don't have to be either or.”
Bravo said that feels especially important right now “because of the political commotion around what it is to be Hispanic, and all of the violence now being enacted towards the Hispanic groups.”
In August, a man killed 22 people at an El Paso Walmart. The alleged gunman told police when he was arrested that he drove 10 hours to the border town to target Mexicans. 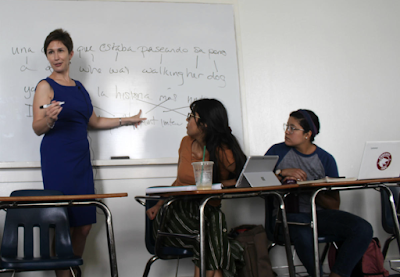 St. Mary's University Professor Meghann Peace shows students how Spanglish speakers follow the syntax rules of both Spanish and English when they code switch on Sept. 23, 2019.
CREDIT CAMILLE PHILLIPS | TEXAS PUBLIC RADIO
The Role of Culture and Society
Bravo’s classmate, Elisha Carrillo, had a different experience with Spanish growing up. But the class is also helping her better understand her family’s relationship to the language.
Carrillo’s family has lived in San Antonio for generations. Her mom and grandma speak Spanish, but they didn’t really teach it to her.  Instead, she learned Spanish in school.
“My grandparents talk a lot about being discriminated in school for speaking Spanish, and, you know, being hit,” Carrillo said. “I think, just like subconsciously, they think we're not supposed to speak that.”
In the 1950s and 60s it was common practice in some schools to punish students for speaking Spanish, even on the playground.  At the time, Texas had an “English only” policy for schools.
For Carrillo, learning Spanish in school is a way to reclaim part of her cultural identity. But, at the same time, she gets frustrated by people who expect her to be able to speak the language.
When she studied abroad in Spain last semester, people were surprised to learn she was American.  When she was little people would walk up to her in stores in San Antonio and ask her questions in Spanish.
“I think people get confused because they assume if you're Brown, you speak perfect Spanish,” Carrillo said. “People everywhere just expect you to be a certain way because of how you look.”

St. Mary's University students discuss code switching with Professor Meghann Peace during their Heritage Spanish class Sept. 23, 2019.
CREDIT CAMILLE PHILLIPS | TEXAS PUBLIC RADIO
Carrillo’s professor, Meghann Peace, said her students know more Spanish than they think they do. Several of them were originally signed up for a more traditional lower-level language class.
“They thought they didn't speak it well. And on the first day, I heard them talking, and I said, ‘Oh, no, no, no. Don't even — don't give me that. You do. You do know this,’” Peace said.
Her goal for the class is for her students to practice writing in standard Spanish, so they can use that dialect if and when they want to. But she also wants them to become more confident in their skills, and be able to defend their use of Spanglish.
“A standard dialect is simply the standard because the people who are in power made it the standard,” Peace said. “Why are we seeing this as something bad or unnatural or an attack against the purity of the language? Which is, of course, silly, because there's no such thing as pure language.”
Peace isn’t the only educator working to normalize Spanglish. According to a 2016 survey by Daniel Villa of New Mexico State University, there are roughly 40 universities across the country that teach a course on U.S. Spanish.
Camille Phillips can be reached at Camille@tpr.org or on Twitter @cmpcamille.
Posted by Angela Valenzuela at 12:13 PM