Friends,
This past week without power for more than 48 hours in single-digit, and otherwise, very low temperatures—ice and snow on the roads—was intense, to express this mildly. At least our home has insulation and a gas-run fireplace that we kicked into action. Our stove burners, too.  Later, I learned of how risky that might be. With 30 people in Texas alone—and counting—who lost their lives, many others—far too many—were not so fortunate.
On top of our state putting us at risk through its utter negligence, us Texans simply aren't prepared for weather like this. We barely have coats, some of us. It was therefore absolutely incumbent on our governor and state leaders to prepare us all last week with what was to lay ahead. Lives would have been saved with more planning, without a doubt. Every life is precious.
I was therefore very pleased to read this must-read Austin American-Statesman's blistering opinion-editorial written by Executive Editor, John Bridges, for which he also received national attention this morning on CNN.
Expressed with the righteous anger and indignation felt by so many of us, this should totally be a wake-up call to the importance of voting and elections and the impacts they have on our lives and well-being—or lack thereof, as in the Texas case. So neglectful our leadership, and with enormous consequence and harm to our families and communities. And all with our taxpayer dollars.
We serve many parents associated with our Saturday school here in Austin, Texas, named Academia Cuauhtli. Working with our students and coordinators, it has been a real team effort. And a sacrifice, too, considering just how much work the winter storm seemed to create.  We literally had to get warm in order to warm up back to each other quickly in an unanticipated manner.
I feel so blessed and so humble to be a part of this beautiful, caring community. My next post will be a fundraiser we are having for our families in hopes that you will make a donation. No amount is too small.
Thanks to Education Policy and Planning doctoral student, Maria Unda and Texas State University undergraduate, Monica Villafuerte, for the flyer and website resources updates for our families. We all deeply appreciate your initiative. Thanks to Dr. Chris Milk for helping us to strategize our response. Martha P. Cotera and Dr. Emilio Zamora, too.
Thanks, as well, to our coordinators, Itzel G. Garcia and Alejandro Quiahuitl Martinez for reaching out to all of the family members to determine their needs and well-being.
Thanks to Dr. Emma Mancha-Sumners for forwarding website resources and problem-solving as a Sanchez-Metz parent with the PTA to see how we can work with the principal to help get resources to them.  Thanks to our ESB-MACC familia, namely, Lori Navarrete, Olivia Tamzarian, and Executive Director Michelle Rojas for your unflagging support, helping us to secure a space that will allow us to get resources to our families. It's all in process at this very moment. Will post our fundraiser soon.
As citizens and residents, I recommend that we all accord greater consideration than we currently might, to what good government can and should do, as opposed to those who pursue elective office with no real intent or desire to actually govern. So anti-social and against society, against the people. Not for the people. So sad and so pathetic. This posture before and toward "the people," is so brazenly exclusive, arrogant, and injurious.
Congresswoman Alexandria Ocasio-Cortez comes to Texas and raises $3 million while Ted Cruz takes the quickest exit out. And not just any exit, as we know...
We all need to tune in and get up-to-speed, myself included, on energy policy and politics in our state and nation. We all pick our fights, but this arena of policy and politics is a special case and clearly merits our attention even as this human-made disaster gets full exposure to the light of day.  In this vein, also read this truly illuminating piece titled, "Shoring up the grid: What El Paso can teach the rest of Texas."
Special thanks to John Bridges and the Austin American-Statesman.
We appreciate everything and anything you can to hold our officials accountable and to keep democratic governance alive.
Are y'all feeling just a little bit upset about this whole scenario, my friends?
Yeah, me, too.
Here's what you can do.
Sign this petition put forward by Congressman Joaquin Castro:
Sign this petition to tell Governor Greg Abbott, ERCOT and the Public Utility Commission of Texas that we won’t just roll over and let them make us pay to clean up their mess.
We as a polity must hold all these folks accountable.
-Angela Valenzuela
#snowstorm #SnowStorm2021
Texas government is broken. We deserve one that works.
John Bridges, Executive Editor
Austin American-Statesman Feb. 19, 2021 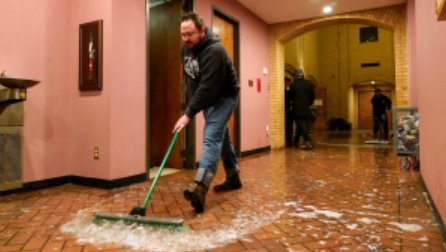 “The government you elect is the government you deserve,” Thomas Jefferson famously said. Tom must've never made it to Texas.
Texans deserve better government.
For too long, Texans have elected people more interested in dismantling government than actually running one. As we painfully learned this week, small government sounds good right up until the power goes out and the faucet runs dry.
Texans deserve a government that puts the people, the governed, first.
For too long, our elected leaders have put their own political interests first, their cronies second and business interests third. 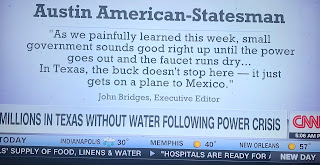 Texans deserve a government that actually does the hard work to build and safeguard the critical systems on which we all depend.
For too long, our politicians have been more interested in wedge issues to win party primaries increasingly dominated by extremists.
How much time did our Legislature spend debating transgender bathrooms? How many new ways can we find to restrict access to abortion and promote out-of-control gun culture? How many times can we sue the federal government for political sport? ("I go into the office, I sue the federal government and I go home," Greg Abbott boasted when he was attorney general, starting a tradition his successor has been proud to continue, even when it means trying to disenfranchise millions of voters.)
Our government has dismantled the social safety net and outsourced what's left.
Our regulatory agencies work to protect the businesses they regulate, not the people they serve.
Our state officials repeatedly undermine local governments. The last Legislature restricted local taxing authority, much of which is spent on public safety. Now the governor wants to forbid cities from controlling their own police budgets.
This all might have seemed liked good political theater until we take stock of what it has wrought.
This week, Texas could not keep the lights on. Texas could not keep the water flowing. Texas could not keep the roads open.
And our leaders struggled to tell us why. They gave us no warning that power failure could be coming. When it did, they disappeared for the critical first day and have since offered precious little explanation or guidance.
In Texas, the buck doesn't stop here — it just gets on a plane to Mexico.
Rather than face up to the fact that they've been warned about Texas power grid vulnerabilities for a decade, numerous Texas officials sought to shift blame to other agencies or to frozen wind turbines, because renewable energy is somehow a liberal conceit. Gov. Abbott spent more time talking about the Green New Deal than the old raw deal he and others have dealt this state.
Abbott's predecessor, Rick Perry, said Texans would rather endure a few days of blackouts than have the feds (the department he recently and ironically ran as U.S. energy secretary) involved in our energy grid. Speak for yourself, Rick, not for the Texans shivering in their own homes, burning candles for warmth and harvesting snow to flush toilets.
If Texas wants its own power grid and to run it the Texas way, its government must tirelessly regulate, inspect and enforce to ensure that Texans have life-sustaining electricity in the brutal heat of summer and killer cold of winter. Our leaders must be open, forthright and transparent with us about the system's failures and the costs to fix it.
To use an already-overused cliché, the failures we've seen in Texas this week are a feature, not a bug, of the style of government and the character of people that we have elected.
Before the storm, Texas failed in its response to the coronavirus. When local officials tried to establish or enforce capacity limits and mask wearing, state officials stepped in to object because, like windmills, masks must be liberal. Given months to plan for the vaccine rollout, both state and local governments failed to develop and communicate a workable plan. More than 41,000 Texans are dead.
Texans don't ask much of our government. But is it too much to ask that government not try to kill us?
Texans deserve better. Let's remember these frozen, powerless, waterless nights on Election Day.
Bridges is executive editor of the Austin American-Statesman.
Posted by Angela Valenzuela at 4:50 PM