Despite a school year turned upside down by the coronavirus, standardized testing in Texas will go on.

Disappointing, but not surprising. We need to stop testing kids so that we can actually educate them.

You can hear Commissioner Morath defend his position here.

It should matter what teachers and parents say on the matter as they are the ones closest to the classroom and are most aware of how this testing culture is so detrimental to classroom instruction.

We must all challenge this madness.

Despite a school year turned upside down by the coronavirus, standardized testing in Texas will go on. 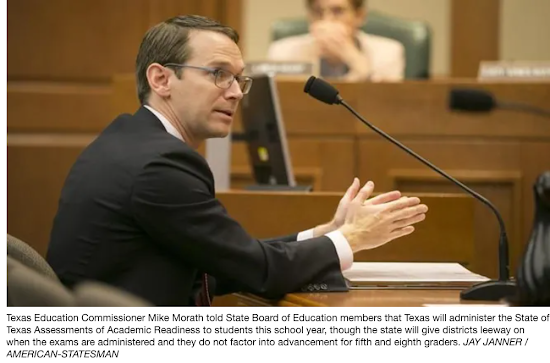 A few things will be different for the State of Texas Assessments of Academic Readiness, however. Grade promotion requirements have been waived for students in grades five and eight, but high school seniors still must pass the exams to graduate. And the Texas Education Agency will not grade districts based on the results.

Many other things will be the same, including a requirement that students take the test in person, even if they have been learning remotely during the pandemic.

The testing plan has its critics. Democrats in the Texas House renewed calls Wednesday to cancel the test this year, saying that the STAAR test does not provide an accurate picture of how students and schools are performing.

“We cannot ask our schools to take on the burden of scheduling in-person STAARs for all the students across the state," state Rep. Alma Allen, D-Houston, said during a news conference. "We’re in the middle of a life-threatening pandemic. We also cannot ask our teachers or our school personnel, students and families to put themselves at risk for an unnecessary test.”

Supporters of the test say it will be crucial in measuring how much students have learned during the pandemic.

The test provides information about student achievement that can be used to inform changes and target resources to schools and students that need the greatest support, a Texas Education Agency spokesperson said.

State Rep. Dan Huberty, R-Houston, who has served as the chairman of the House Education Committee, said standardized testing is the best way to get a clear picture of where students stand compared to statewide learning goals. Standardized testing also is required by the national Every Student Succeeds Act in order for states to receive federal education funding, he said.

“We want to figure out how far behind kids are,” he told the American-Statesman. “We need to get a baseline because we didn’t take the test last year. We need to figure out where kids stand.”

State education officials say they are offering more flexibility for when districts can schedule the tests, typically administered in the spring, which include not only the STAAR but also the STAAR Alternate 2 for special education, and the Texas English Language Proficiency Assessment System and its alternate.

As in years past, districts can test students online or on paper, although all testing will occur in an in-person setting.

Heather Sheffield, board president for Texans Advocating for Meaningful Student Assessments, does not think the state should conduct the STAAR this year. She said the test results do not give teachers information fast enough to help students.

“It’s really autopsy data, teachers aren’t getting the results quickly,” she said. “Why are we spending money on a test that doesn’t really help our teachers and shuts down our schools for days or really weeks at a time?”

Sheffield wants the state to move away from the STAAR and toward a test that provides meaningful data and is not high stakes. She is glad that TEA is not giving districts A-F grades this year and would like to see the state transition to a rating system that does not rely only on standardized tests.

Huberty said that high school students who fail end-of-course assessments but meet certain requirements still have a path to graduate by receiving approval from an individual graduation committee.

Clay Robison, spokesperson for the Texas State Teachers Association, which represents about 68,000 state teachers, said the group believes standardized testing and testing-based accountability should end. Robison said the test discriminates against students of color, low income students and students whose first language isn't English. If state education officials want to understand how students are performing, they should sit down with teachers, he said.

Robison said that money spent on the STAAR test could be better spent on other, more pressing things.

Robison also questioned the state's commitment to spend $338 million to transitioning the test online, which was announced last month. This includes a three-year $262 million contract with the Washington, D.C.-based Cambium Assessment to manage the administration, scoring and reporting on an online testing platform.

London-based Pearson, which has been involved in Texas testing for four decades, was awarded $126 million over the same three years to develop the assessments. Pearson also has an existing testing contract that ends in August.

These two companies will take over from Educational Testing Service, which has a contract that ends on Aug. 31.

Posted by Angela Valenzuela at 10:45 PM