Opinion: Stacey Abrams: Our democracy faced a near-death experience. Here’s how to revive it.

Great opinion piece by Stacey Abrams largely on the need for political reform, including campaign finance, an overhaul of the Senate filibuster, addressing partisan gerrymandering, and "passing the For the People Act that would broaden voter access. Another reform is the John Lewis Voting Rights Advancement Act and the Protecting Our Democracy Act to reign in potential corruption by future presidents lest they see themselves, as Trump did, as above the law.

Opinion: Stacey Abrams: Our democracy faced a near-death experience. Here’s how to revive it. 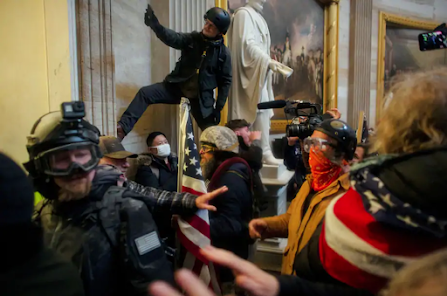 Stacey Abrams, a Democrat, is a former minority leader of the Georgia House of Representatives and founder of the group Fair Fight.

The violent Jan. 6 insurrection at the U.S. Capitol, coupled with ongoing threats to election officials, election workers and lawmakers at all levels, represent unprecedented attacks on the foundations of our democracy. Certainly, President Donald Trump and others in his party who inspired the attacks must be held accountable through all available means. But accountability alone will not be nearly enough.

Only meaningful reforms can undo the damage done — and establish a government that is truly representative of the people. The next real test of our democracy comes now.

Make no mistake: Democracy may have survived this year, but President Biden and Vice President Harris were elected despite, not thanks to, weakened electoral systems. Together with the Democratic Congress, they now have the opportunity to implement reforms that reaffirm our nation’s promises that our country represents and works for everyone. We as Democrats must act before it is too late.

Our democratic system faces extraordinary threats today because of sustained attacks from Republican leaders who throw up roadblocks to voting and, among the worst actors, stoke the flames of white supremacy and hyper-nationalism to cling to power. There can be no clearer example than the covid-19 pandemic. The deaths of more than 450,000 people in the richest country in the world are symptomatic of a democracy in crisis and a political system that rewards cronyism over competence. Despite strong public support for the Centers for Disease Control’s work, the Affordable Care Act, and other economic justice and safety-net policies that could save lives, millions nevertheless continue to contract the disease without adequate access to health care.

No thinking person can deny that the communities of color disproportionately suffering and dying from this pandemic are also the people whose votes — and ability to hold failed leaders accountable — have been continuously suppressed.

The pandemic has been a collision of tragedy and corroded institutions, and the challenge is in how we respond. We can either engage in collective amnesia about what we have just lived through, and leave an unaccountable government in place, or we can rise to meet this moment by fixing the broken social compact. Defeating Trump was not enough. Meaningful progress on health care, racial justice and the economy requires aggressive action on voting rights, partisan gerrymandering and campaign finance.

One of the first steps must be an overhaul of the Senate filibuster, which has long been wielded as a cudgel against the needs of millions who struggle. Today, the parliamentary trick creates a more sinister threat to our nation: the ability of a minority of senators, who represent 41.5 million fewer people than the Senate majority, to block progress favored by most Americans.

Democrats in Congress must fully embrace their mandate to fast-track democracy reforms that give voters a fair fight, rather than allowing undemocratic systems to be used as tools and excuses to perpetuate that same system. This is a moment of both historic imperative and, with unified Democratic control of the White House and Congress, historic opportunity.

The agenda to restore democracy also includes passing the For the People Act to protect and expand voting rights, fight gerrymandering and reduce the influence of money in politics; the John Lewis Voting Rights Advancement Act to restore the full protections of the 1965 Voting Rights Act; and the Protecting Our Democracy Act to constrain the corruption of future presidents who deem themselves above the law. These landmark bills have broad-based support, and would have passed long ago were it not for obstructionist leaders who fear losing their own influence if the American people have more power of their own.

Further, fixing our democracy requires we finally allow our fellow Americans in D.C. and Puerto Rico, the vast majority of whom are people of color, to have full access to our democracy. That means D.C. statehood and binding self-determination for Puerto Rico. In the District, as white extremist mobs destroyed the Capitol, murdered a police officer, and threatened the lives of elected officials and residents, Washingtonians were left defenseless because D.C. is not a state and its chief executive had no authority to deploy the National Guard.

Time is short. The forces standing against a democracy agenda seek to preserve and expand paths to power by shrinking the voting pool rather than winning voters over. In reaction to the historic turnout of 2020 and Democratic victories in places such as Georgia, already this year more than 100 bills have been put forward in state legislatures seeking to restrict voting access. Those efforts will not end without a fight.

We don’t know how many chances we will get to reverse our democracy’s near-death experience. We must not waste this one. We must go big — the future of democracy demands it.

Posted by Angela Valenzuela at 8:33 PM