A Republican Hispanic Governor? The Last Thing We Need is a "Colonizer In Chief"

God forbid that Governor Abbott would "win the next generation" of Hispanics as he indicates here.  Frankly, I don't know how any self-respecting Mexican American or Latina/o, generally, can support this governor with his racist, anti-Mexican policies and party, especially SB4.

In a speech he recently gave to Hispanic republicans, he said, to applause, that Democrats seek to divide the state, using race as a way to divide it.

Por favor, gobernador.  Nothing could be more divisive and racist than SB4 which has nothing to do with law enforcement  (Link). Heck, being an undocumented individual isn't itself even a crime (Link).  It's more like a traffic violation.  If this were anything different from what simple logic and credible sources indicate, you would have received major law enforcement support for this bill during the last legislative session (read further hear in this piece by Greg Pulte on SB4 and the Immigration Industrial Complex).

Another way to parse this out is to read the 2016 Republican Party Platform itself.  Of course, all of this will appeal to colonized "Hispanics"—or whatever you want to call them—those that accept the dominant group's portrayal of them.

My friends, despite the governor's appeal for Texas' first Hispanic governor to be a republican, the last thing we need is a "Colonizer in Chief," whether republican or democrat.


How bad are things right now for Hispanics right now?

Really bad.  If you do not know anything about this, check out my recent posts, especially this one titled, America’s Future Is Texas by Lawrence Wright.  I am deeply concerned about the largely indifferent, if not callous, leadership in our state.

So go ahead, governor.  Give it a try.  I hope our community, especially Hispanic republicans, have the cojones to stand up to you, your party, and your president and the hateful rhetoric and policies that seek not to empower Hispanics, but to weaken and divide us.

Before it gets lost on me, Happy Indigenous Peoples' Day, everybody, from Austin, Texas!

As he seeks another term in 2018, Gov. Greg Abbott is seeking to build on the inroads he made with Hispanic voters when he first ran for governor in 2014. 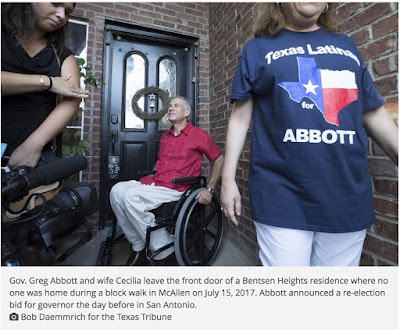 SAN ANTONIO.  Greg Abbott may not have a serious opponent for re-election yet, but he is already running against one group in particular: those who say Texas’ Republican governor can’t make further inroads with the Hispanic community in the era of Texas' "sanctuary cities" ban and Donald Trump.
Abbott made that much clear here Saturday as he addressed his campaign’s inaugural Hispanic Leadership Conference, rallying the Republican crowd against Democrats looking to unseat him — and laying the groundwork for a longer-term push for Hispanic GOP support.
“What we know is whoever they drum up to run against me, we are going to run against and we’re going to defeat,” Abbott said. "But what I want you to know is that far more important than running this race and running to win this race, we are running to win the next generation.”
The conference, attended by 250 activists, was the first in a series geared toward a goal that’s becoming central to Abbott’s re-election bid: growing the 44 percent share of the Hispanic vote he received in 2014. Looking to 2018, his campaign wants to not only build on that number but do so substantially, with an eye on capturing a majority.

The Texas Tribune thanks its sponsors. Become one.

“We plan to wage, if necessary, hand-to-hand combat with our opponents to win the Hispanic vote,” Dave Carney, Abbott’s political chief, said in a recent interview.
Abbott, who made the Rio Grande Valley his first stop after launching his re-election campaign in July, is so far chasing the Hispanic vote without the presence of a serious Democratic opponent in 2018, though the party insists one will emerge. In the meantime, Democrats point to a variety of factors they believe will hinder Abbott’s outreach efforts, including his party’s incendiary president, Donald Trump, and the state’s new "sanctuary cities" law that Abbott championed.
Senate Bill 4 in particular, they say, presents a steep new obstacle for Abbott to overcome with the Hispanic community, which he wooed in 2014 by touting that his wife, Cecilia, would become the state’s first Hispanic first lady.
“It’s a completely different world now,” said Cristóbal Alex, president of the Latino Victory Project, a Democratic group that works to elect Latinos. “Here’s the thing: Yes, Greg Abbott’s wife is a Latina and I hear that she’s a good person, but Abbott is really a Category 5 disaster for Latinos and the people of the state of Texas.”
In an interview after his speech, Abbott pushed back on the Democratic focus on SB 4, which aims to punish local law enforcement officials who do not fully cooperate with federal immigration authorities. It has raised concerns about racial profiling, but Abbott said he sees the law as more of an asset than a liability as he reaches out to Hispanic voters. The Hispanic community, he said, “wants safe communities just like everybody else.”
When it comes to Trump, Abbott expressed confidence that Texas Latinos see him as “completely independent.”
“They know and we’ll continue to educate them about my historic connection with the Hispanic community and about how my values and principles connect with the values and principles of the Hispanic community,” Abbott said. “So any and all money spent trying to connect me to Donald Trump is like setting that money on fire and incinerating it.”
Abbott supported Trump when he became the GOP’s presidential nominee last year but kept his distance at times. Since Trump has taken office, the two have aligned on a host of issues, including the push to outlaw so-called “sanctuary cities” — which Abbott spearheaded long before Trump won the White House.
“Donald Trump is pushing the policies that Greg Abbott has crafted in Texas,” said Manny Garcia, the deputy executive director of the Texas Democratic Party. "The Greg Abbott playbook is what Donald Trump is trying to do.”
In addition to being deeply skeptical of Abbott's push for Latino support, Democrats like Garcia question whether Abbott really received 44 percent of the Hispanic vote in 2014. The oft-cited number is based on exit polling, which some pollsters have criticized as misrepresentative of Hispanic voters, particularly in the wake of the 2016 presidential election.
Abbott began his speech here Saturday by evoking the centerpiece of his Hispanic outreach since he launched his 2014 campaign: his wife, Cecilia Abbott, the first Hispanic first lady of Texas. Sprinkling in some Spanish — mi familia to refer to his wife's side of the family — he spoke of his connection to the Hispanic community through his marriage to her, as well as the values he believes the community shares with the GOP: faith, family and freedom.
It was a largely apolitical speech until Abbott pivoted to a discussion of the challenges Texas faces going forward — namely from “Democrats who seek to divide us as a state,” Abbott said.
“They’re trying to use race as a way to divide us. They are messing with the wrong state,” Abbott said to applause, going on to invoke the unity Texans have showed in the wake of a Category 4 storm. “Perhaps they did not get the message that Texas sent in our response to Hurricane Harvey.”
Toward the end of his speech, as he urged more Hispanic Republicans to run for office, Abbott pulled out a baton. Abbott, an avid runner before the paralyzing accident he suffered in 1984, said he plans to keep the baton, which he signed and left a message on, in his office. That is, he added, until he can hand it off to the next Hispanic Republican to win statewide office — maybe even the highest of all.
Most recently, Hispanic Republicans have won election to statewide positions including land commissioner (George P. Bush) and state Supreme Court justice (Eva Guzman). But the top office has remained elusive — for Hispanics of both parties.
“The first Hispanic governor must be a Republican,” Abbott said, pausing between words for emphasis.
Abbott is hoping to keep engaged Hispanic Republicans like Rudy Madrid, who unseated a Democrat in 2014 to become Kleberg County judge — making him the southernmost GOP county judge in Texas. In an interview on the sidelines of Saturday’s conference, Madrid recounted how he grew up a Democrat but drifted toward the GOP after a stint in the military. Then he found himself solidly in Abbott’s camp during the 2014 gubernatorial race, drawn to the governor’s fiscal conservatism, among other things.
As Abbott asks Hispanic supporters like Madrid for another term, the county judge says he has not seen any cause for regret during Abbott’s first two and a half years in office. He said he has been particularly impressed with Abbott's commitment to overhauling the state's child welfare system.
“After following him and after having the honor of being on his team, he’s won me over tenfold now,” Madrid said. “It’s only gotten better, and it’s going to get better.”

Posted by Angela Valenzuela at 9:34 AM