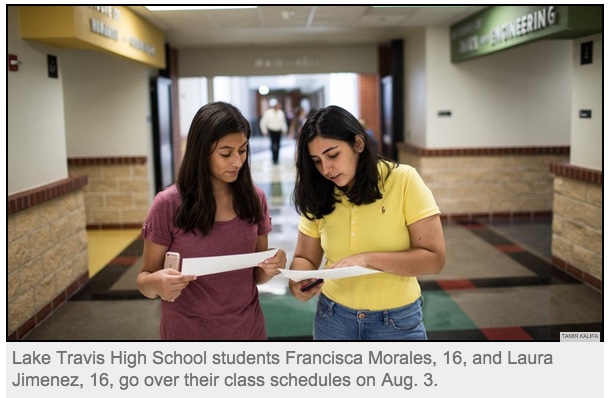 Posted: 11:58 a.m. Thursday, September 28, 2017
High school ethnic studies classes like Mexican-American studies have become increasingly popular in classrooms across the country, including some in Texas. Schools that teach these courses can expect to see improved grades in low-performing students, increased graduation rates and better social outcomes, according to several studies.

Yet, ethnic studies are not part of the K-12 curriculum in Texas, a state with the second-largest Latino student population, according to the U.S. Census Bureau.
Despite their diversity, today’s students still experience the negative effects caused by a state history curriculum that has been racially insensitive for decades. That’s really no surprise given that many of the people leading Texas’ education system are in their late 50s and 60s and didn’t learn of the state’s rich, diverse past when they were in school.
HOW WE GOT HERE: After tossing ‘racist’ textbook, state board considers new one.
Yesterday’s approach to teaching history by excluding people of color from the narrative cannot continue. It’s time education leaders in Texas provide curriculum reflective of the state’s diverse history and of its ever-growing diverse population. Consider that in Texas, Latinos make up 52 percent of the state’s 5.2 million public school students; white students account for 29 percent; while African-Americans and Asian-Americans make up 13 and 4 percent, respectively.
Whose version of history students are taught in the classroom can have negative consequences, especially on students of color, according to a St. John Fisher College study. When students of color are inaccurately or stereotypically portrayed, they question the validity of the source material, the study found.
The State Board of Education dodged such a bullet in 2016 when it rejected a Mexican-American studies textbook that critics said was an error-riddled racist portrayal of Mexican-Americans.
The decision came as a result of the public pressures born of a more transparent textbook review process created under State Board of Education Chairman Donna Bahorich. The process allows for the public and experts to weigh in on proposed teaching materials that are made available online, ensuring that proposed textbooks filled with stereotypes and inaccuracies are less likely be approved by the board.
Last week, the board was presented with the latest proposal, “The Mexican American Studies Toolkit,” written by Tony Diaz, a Mexican-American studies professor at Lone Star College and a Houston-area activist. Diaz’s book did not produce any serious reasons for objection when it was presented. If the board adopts it in November, the book will be added to a list of recommended textbooks available for use by Texas students next school year.
VIEWPOINTS: Young would-be voters should learn value of their ballots.
The book could help schools that opt to use it. That was the experience of the San Francisco Unified School District. After the district added ethnic studies to its curriculum in 2010, ninth-graders showed a 21-percent increase in attendance and a 1.4-point increase in GPA, according to a Stanford Center for Education Policy Analysis study.
Researchers with the National Education Association found that schools that added ethnic studies curricula reported higher standardized test scores and graduation rates than before. The key, according to the study, is having well-designed instruction from teachers who have a good handle on ethnics studies and can relate with students.
Not only academic scores improve. Through ethnic studies, white students and students of color experience what we all have in common, according to the National Education Association study. Simply put, when students of color see themselves reflected in textbooks, the more likely they are to see improvements in academics.
I can relate.
In college — not in any elemenatry, middle or high school — is where I learned the history and contributions of Mexican-Americans and other Latinos in this country. For the first time, history interested me. I wanted to read and learn more, so I went out of my way to enroll in classes outside my major and ended up with a double major. I wished I’d learned that history sooner. I don’t wish that regret on more students.
Lawmakers like Sen. Chair Sylvia Garcia, D-Houston, seem to get it. Earlier this year, she authored Senate Bill 695, which would have required the State Board of Education to develop ethnic studies as elective courses for all middle and high school students. It failed to gain traction.
FOLLOW US ON TWITTER: Viewpoints delivers the latest perspectives on current events.
State education leaders, lawmakers, scholars and community members should keeping pushing to ensure our students see their stories reflected in the textbooks Texas approves for its classrooms. It could make a world of difference for our children.
Like the great author and activist James A. Baldwin wrote: “Know from whence you came. If you know whence you came, there are absolutely no limitations to where you can go.”
Posted by Angela Valenzuela at 3:55 PM