Why a Key Research Finding is ruining teaching in Texas, by Jay Mathews

Concerning piece about what appear to be institutionalized deficit perspectives involving Texas teachers and classrooms populated by bilingual children from low-income backgrounds.  I will have to read the Hart and Risley research to see whether this is in actuality a distortion of research findings as suggested herein. Perhaps it's an actual bias.

I feel proud that this research by my colleagues, Drs. Jennifer Keys Adair and Kiyomi Sánchez-Suzuki Colegrove, and UT Educational Psychology Doctoral Student, Molly McManus, is getting the attention it deserves. 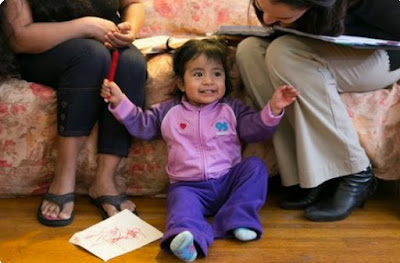 This method has proved effective in Montessori classrooms worldwide for more than a century. It is still relatively uncommon in the United States, but it worked in the Texas school. The students eventually scored 30 percentile points above similar children in ordinary classes.
So the researchers were stunned at the negative reaction when they showed the video to first-graders who had not been taught that way. What they found casts troubling light on one of the most influential educational research findings ever.
The first-graders shown the video “seemed to think the learning was terrible,” said researchers Jennifer Keys Adair, Kiyomi Sánchez-Suzuki Colegrove and Molly E. McManus in the fall issue of the Harvard Educational Review. They all agreed that “the children in the film should be less noisy, more still and much more obedient to have any chance of being good learners.”
One boy said the right way to learn was to “keep your mouth zipped, eyes watching . . . and ears listening!”
Their teachers told the researchers they liked the new approach but stuck with traditional methods because they didn’t think bilingual children from low-income backgrounds could handle it.
Why? They didn’t have enough vocabulary, the teachers said. “In school after school, we heard educators repeat that parents did not talk to their children enough or give them the vocabulary they needed to be successful in school.”
The researchers, who work at the University of Texas at Austin and Texas State University, knew where that idea came from. Few studies have been reported as widely as the 1995 work of University of Kansas psychologists Betty Hart and Todd R. Risley. Working with 1,318 observations of just 42 children, Hart and Risley concluded that in their first four years, impoverished children heard 13 million words on average, compared with 45 million heard by children of affluent parents. The early advantage in word exposure correlated strongly with better language and literacy skills five or six years later.
In a 2003 article, Hart and Risley said “the risk to our nation and its children” made anti-poverty efforts to change children’s lives “more urgent than ever.”
For 35 years, I have covered educators trying to raise achievement for low-income children. They told me the Hart-Risley findings meant children’s language experiences had to be enriched as early as possible, essentially from birth, and at every grade after that. Apparently, many people in education didn’t get that message. Much more research and outreach is necessary.

I had no idea educators were misinterpreting the Hart-Risley conclusions as a warning against ambitious methods such as those in the video. The Texas researchers have so far found this misunderstanding in only the five schools they have studied, but it is deep and consistent enough to suggest that the problem is widespread.
Risley died in 2007, Hart in 2012. University of Kansas researcher Dale Walker, their close associate, told me they would be “extremely disheartened that their research was being misinterpreted and misrepresented for what appears to be an excuse to not provide young students with the educational content they need to be successful.”
The Texas researchers critique how the Hart-Risley study was conducted as well as how it has been interpreted. But their most compelling finding is the need to help teachers adopt the student-led learning they found worked so well. The classroom dialogue and sharing in their video are essential for building vocabulary, but “when classrooms are too rigid, controlled and task driven, students cannot initiate and continue conversations with their peers,” they said.
It is hard to think of anything more disheartening than denying 6-year-olds a chance to be enriched by a stimulating program for fear their vocabularies aren’t good enough. I have never encountered educational research so distorted, to such ill effect.

Jay Mathews is an education columnist and blogger for the Washington Post, his employer for 40 years.
Posted by Angela Valenzuela at 5:38 PM