BOSTON — When the Boston Public Schools opened the Margarita Muñiz Academy in 2012, it was a first-of-its-kind dual-language high school meant to address issues faced by the city’s growing Hispanic population. At the time, Hispanic students were both the most likely to drop out of the city’s schools and the least likely to enroll in college when compared to black, white and Asian students. They still are, but as the academy enters its sixth full year, its student outcomes are drawing praise from a variety of sources, even while administrators note that steep challenges remain.
The idea behind the Muñiz Academy, named for the longtime principal of Boston’s first dual-language elementary school (the Rafael Hernandez K-8 school), was that many Hispanic students would do better in schools that support their cultural background and, with it, the Spanish language. In Boston Public Schools, roughly 39 percent of Hispanic high school students are classified as “English-language learners” because they don’t speak English fluently. Perhaps not surprisingly, these students drop out at higher rates than any other major subgroup. But not at the Muñiz Academy. In 2016, 75 percent of its ELL students graduated, a rate 14 percentage points higher than the district’s average for this group and higher even than the overall graduation rate for BPS.
Meanwhile, on state tests, the school tends to track with the district average, despite having higher percentages of ELLs and low-income students, who might be expected to fall short. And the dropout rate among the first Muñiz cohort, the class of 2016, was just 2.5 percent, compared with a district average of 10 percent. (Some of Muñiz’s initial cohort transferred to other schools or moved out of the district.)

The school’s graduation rates and test performance have earned praise, says Dania Vázquez, Muñiz’s founding headmaster, but she doesn’t want to rest on it. “We don’t think we’ve cracked the nut yet,” she says. For Vázquez, those numbers still leave far too many students without a diploma or the skills they need to succeed in college. Nevertheless, the school’s record lends credence to a new districtwide focus on supporting students’ language and culture to foster academic achievement. 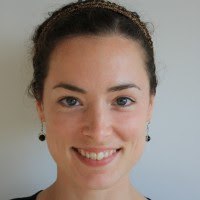 Tara García Mathewson is a staff writer. She launched her journalism career with two award-winning pieces co-produced during a three-month stint at the Kitsap Sun… See Archive
@TaraGarciaM
Posted by Angela Valenzuela at 5:23 PM