Poll finds most Texans think DACA program should be extended 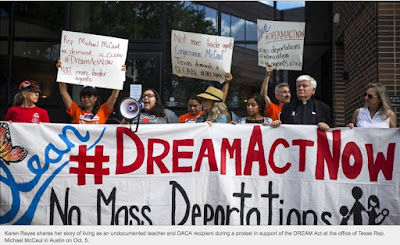 The DACA issue will play a role in the Senate race between U.S. Sen. Ted Cruz and U.S. Rep. Beto O’Rourke.
The poll also found most Texans want Confederate memorials to add historical context or be moved to museums.
Most Texans did not think it was important to pass legislation regarding transgender bathroom policies.
Nearly 60 percent of Texans want to extend the Deferred Action for Childhood Arrivals program, which protects from deportation some 124,000 Texans who arrived as children and remained in the country illegally, according to results of the University of Texas/Texas Tribune poll released Monday.
Answering a separate question, slightly more than half oppose the immediate deportation of unauthorized immigrants living in Texas, according to the internet survey of 1,200 registered voters conducted Oct. 6-15. It has an overall margin of error of 2.83 percentage points.
President Barack Obama created DACA in 2012 by executive action. President Donald Trump rescinded the Obama orders in September and gave Congress six months to come up with a permanent plan on what to do about DACA recipients.
Jim Henson, director of the Texas Politics Project at the University of Texas, which conducts the poll, said the difference in answers to the deportation and DACA questions indicates that Texas voters, Republicans included, have some give on immigration questions.
RELATED: Poll: 49% of Texans disapprove of Trump, but GOP support strong
When asked, “Do you agree or disagree with the following statement: Undocumented immigrants currently living in the United States should be deported immediately?” 25 percent strongly agreed, 19 somewhat agreed, 21 percent somewhat disagreed, 30 percent strongly disagreed, and five percent expressed no opinion.
But here is how the DACA question was framed: “As you may know, a program begun in 2012 prevents the deportation of young people who were brought to the United States illegally as children, completed high school or military service, and have not been convicted of a serious crime.”
Fifty-nine percent of respondents said they support continuing that program, 30 percent said it should be ended, and 11 percent said they didn’t know.
Senate race
As the fate of DACA unfolds, it is expected to be a defining issue in the 2018 U.S. Senate race between Republican Sen. Ted Cruz and his likely Democratic rival, U.S. Rep. Beto O’Rourke of El Paso.
Cruz is a fierce critic of DACA, who had pledged as a candidate for the Republican presidential nomination in 2016 to rescind on his first day in office what he considered an unconstitutional action by the president. He is fond of saying his immigration policy can be articulated in four words: “Legal, good. Illegal, bad.”
O’Rourke is a staunch supporter of extending DACA to protect people who, he said, know no other home but the United States and are, in his view, as American as his own three children.
While 86 percent of Democrats and 39 percent of Republicans in the Texas poll want to continue DACA, opposition among Republicans is driven by those who identify with the tea party. Sixty-nine percent of tea party Republicans oppose DACA, compared with 41 percent of other Republicans.


Sixty-four percent of Hispanic respondents want to keep DACA, while more than 1 in 5 said they would support doing away with it.
On the immediate deportation of immigrants lacking legal status, 50 percent of white voters, 37 percent of black voters and 36 percent of Hispanic voters would back that policy.
Most respondents — including 67 percent of Anglo voters, 45 percent of black voters and 44 percent of Hispanic voters — believe local law enforcement should cooperate with federal immigration authorities. But Texans were closely divided on whether local law enforcement officers should always be allowed to question a person’s immigration status or only if that is the local police agency’s policy. Forty-four percent said always, and 45 percent said that should be a matter of local discretion.
Other issues
The survey found that while most Texans do not want to simply remove Confederate memorials, a slight majority believe they should be moved to museums or have some additional historical context added where they stand.
Eight percent of respondents would simply remove the memorials, 30 percent would move them to museums, 22 percent would leave them where they are while adding historical context, and 34 percent would leave them as is.
Nine percent of Republicans support removing or relocating the Confederate memorials, compared with 75 percent of Democrats.
The survey also noted that “some Texas leaders prioritized restricting access to public restrooms for transgender people in the recently concluded legislative session” and asked, “How important do you think it is that the Texas Legislature address this issue?”


Twenty-four percent said it was very important, 19 percent said somewhat important, 15 percent said not very important, 36 percent said not at all important, and 6 percent didn’t know.
That legislative effort, championed especially by Lt. Gov. Dan Patrick, and backed by Gov. Greg Abbott, was stopped cold in both the regular and special legislative sessions by House Speaker Joe Straus, R-San Antonio, and his lieutenants.
On guns, a majority of Republicans believe that more guns would make the country safer, while an even larger majority of Democrats believe the opposite.
Altogether, 52 percent of the registered Texas voters surveyed said they thought gun control laws should be made more strict, 13 percent said they should be less strict, and 31 percent wanted them left as they are now.
On Obamacare, half of Texans want to repeal it and 38 percent want to keep it. Of those who want to repeal it, 57 percent want to replace it with an alternative, while 38 percent don’t want to replace it.

Posted by Angela Valenzuela at 7:55 AM