This post is a really good followup to my earlier post today titled, "Today It’s Critical Race Theory. 200 Years Ago It Was Abolitionist Literature. The common denominator? Fear of Black liberation." As University of Texas UT History Professor Monica Muñoz Martinez notes, curricular censorship has a deep history in our state that attaches closely to the legacy struggle for the teaching of Mexican American Studies in our schools.

Dr. Muñoz Martinez also explicates House Bill 3979 that passed during the regular legislative session. She also weighs in on its "cleaned up" version Senate Bill 3 (HB 178) from our Special Legislative Session that wraps up soon.  This version removes helpful amendments put forward by democrats in the regular session.

It's possible that Gov. Abbott will call another special session in hopes that democrats make their way back to Texas from Washington so that he and conservative legislators can move forward with their nefarious agenda to disenfranchise the students through curricular censorship and residents of our state through voter suppression.

White supremacy is the through line, the thread that connects the past to the present. White legislators say that they're not racist. However their rhetoric is empty since they are not anti-racist, opposing racist policies and practices. There is no neutral ground here because policies are inescapably reflective of power relations and imbalances of society, imbalances that find expression in the race and gender makeup of a legislature that allows one race-gender group to rule over the others.

Yes, it all connects, and the solution is always more diversity and inclusion and most especially, more democracy. Not less.

We need all our historians to speak up! 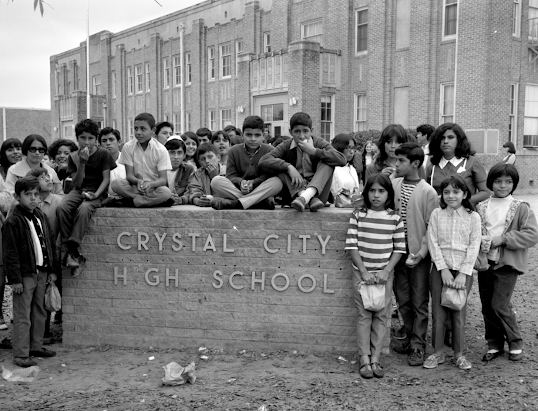 by Monica Muñoz Martinez |  Education, Race/Ethnicity - Women's Media Center 7/20/21
When a right-wing policy group recently tweeted last month a list of 21 phrases for detecting Critical Race Theory (CRT), the backlash was so strong that it was soon removed. The tweet, however, is part of a long campaign to preserve the myths of white supremacy and to squash truth, accuracy, and the right to a quality education. 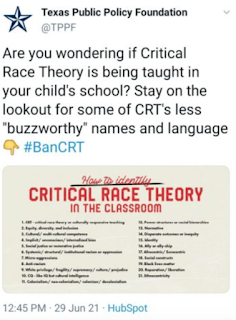 The post by the Texas Public Policy Foundation was on the heels of Republican legislators passing in the Lone Star State a bill known as HB 3979. Signed into law by Governor Greg Abbott, HB 3979 includes provisions to rewrite social studies requirements, undermines diversity and inclusion trainings, dictates how teachers can talk about the history of racism and slavery, and prohibits schools from accepting private funding for professional or curriculum development.When HB 3979 was being debated this past spring, more than 200 historians, myself included, released an open letter, warning that the bill would leave students in Texas without an understanding of how race and gender have shaped U.S. laws and policies. Therefore, they would be deliberately misinformed and academically disadvantaged.HB 3979 dictates that “with respect to their relationship to American values, slavery and racism are anything other than deviations from, betrayals of, or failures to live up to, the authentic founding principles of the United States, which include liberty and equality.” On principle, most people would agree that slavery and racism are moral failures in U.S. history. But what this provision does is dictate how history can be interpreted. It prohibits teachers from discussing topics such as how white supremacy has impacted U.S. history, systemic racism, or the long legacies of slavery and xenophobia. The law also bans teaching the award-winning 1619 project , making it clear that legislators aim to censor factually-based interpretations of history. Instead, teachers will be forced to discuss slavery and racism as marginal to U.S. history.These restrictions are a muzzle. They make it impossible to truthfully teach about the Texas Declaration of Independence, the Texas Constitution, and the writings and speeches of founding figures, like Stephen F. Austin and Sam Houston, who were guided by their racial antipathy towards Indigenous, Mexican, and Black people.In Texas, this campaign to further obscure the roots of slavery and racism was evident in a special legislative session earlier this month. Republican legislators doubled down by proposing HB 178 ( SB3 in the Senate ). This bill would remove amendments added to HB 3979 by Texas House Democrats that mandated students learn the centuries-old history of white supremacy and, unequivocally, that white supremacy is “morally wrong.” HB 178 also struck through mandates for students to learn about federal legislation like the Fugitive Slave Act of 1850 and the Indian Removal Act , and landmark civil rights cases like Mendez v Westminster and Hernandez v Texas. 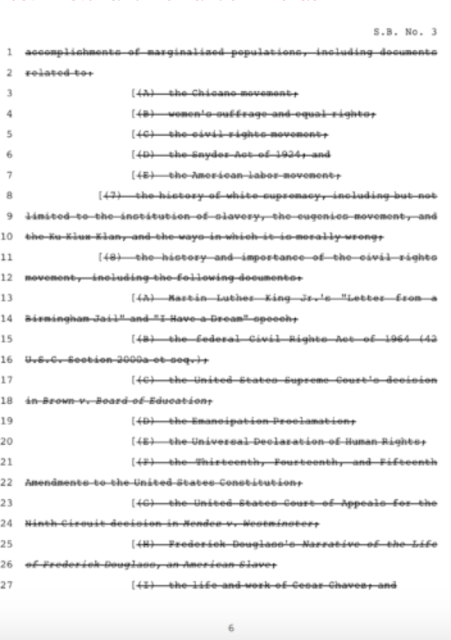 These efforts to gag teachers reflect a long agenda of fostering inequity through public schools. In the 19th century, Manifest Destiny, the belief that white Americans were ordained by God to dominate North America, became the basis for violently displacing Indigenous, Mexican, and Chinese people in the U.S. west. This embrace of racial superiority was used to justify wars, craft laws, and shape institutions like public education. The history of how white Americans conquered the West and of events like the Alamo were whitewashed and taught to students as a narrative of progress that erased or celebrated genocidal violence, colonization, and slavery. It depicted white men as noble heroes and all others as enemies of Anglo civilization .
Public schools in the late 19th and early 20th century were a tool of colonization and conquest. Indigenous children were ripped from their parents and placed in boarding schools, an act of violence we have yet to remedy. In Texas, laws forbid Black students from benefiting from school funds there and lawmakers targeted Mexican escuelitas, local community schools that were both bilingual and bicultural. Lawmakers passed “English Only” laws to prohibit teaching in Spanish, and they segregated schools.Texas-Mexican journalists criticized Anglo politicians and landowners for denying civil rights and for relegating Mexican Americans to cheap labor. One article in 1910 charged that Anglos were excluding Mexican children from schools and trying to create an ignorant class. Journalists also warned that Anglo vigilantes and law enforcement were using violence to try to “condemn the Mexicans to a condition of beasts of burden.”Laredo journalist, suffragist, and teacher Jovita Idar , in particular, took personal risks advocating for racial justice . In 1914, when El Progreso newspaper caught the attention of Texas governor Oscar Branch Colquitt for its criticism of him, he ordered the Texas Rangers to shut it down. In defiance, Idar refused to allow the Rangers into the offices of the paper. The Rangers returned the next day and destroyed El Progreso’s printing press.During the Civil Rights movement—over 50 years after Idar stood up to the Rangers—Mexican American students in cities from Los Angeles to Houston and rural towns like Crystal City and Uvalde walked out of schools calling for desegregation, an end to corporal punishment for speaking Spanish in schools, more representation in faculty and administrations, and for their history to be reflected in curriculum. Now, at a time when more accurate accounts of history are becoming mainstream, supporters of HB 3979 and other “lesson-burning” bills are wildly claiming that students are being taught “ a souped-up version of Marxism,” or lessons that shame white people . Teachers who follow guidelines that have been outlined by professional organizations and the Texas State Board of Education are being dangerously misrepresented as “indoctrinating” students. This right-wing agenda to control how history is taught in public schools is predictably stoking fear. Some groups are making it alarmingly easy for parents to “report” teachers or schools that might be teaching Critical Race Theory. They are not encouraging parents to share concerns with school administrators, but to, instead, submit reports to the same groups that are fear-baiting and stirring misguided anger around CRT and so much more.The Texas Public Policy Foundation listed a sweeping set of “buzz” terms for CRT that included colonization, ally, identity, social justice, and equity, diversity, and inclusion. The graphic it posted made it abundantly transparent that the agenda here is to target diversity and inclusion programs , stifle conversation about social justice, white privilege, and systemic racism, and track even the mention of Black Lives Matter in schools. Any professional historian would know that it is impossible to teach topics like the American Revolution, slavery, westward expansion, Jim Crow, women’s suffrage, World War II, or the history of Civil Rights movement without using at least one of the falsely flagged terms.We’ve seen this playbook before. Opponents of CRT are parroting the hysteria of politicians in 2010 that accused Mexican American studies courses of encouraging students to “hate” America and of promoting racism against white Americans. This was followed by Arizona politicians outlawing Mexican American studies, only to have a federal judge rule that the law violated students constitutional rights because both “ enactment and enforcement were motivated by racial animus.” The frenzy now is around trying to keep these histories out of any classroom, not just ethnic studies.While the damage of HB 3979 will be far-reaching, we cannot overlook the threat to Mexican American and African American studies in Texas and elsewhere. Since the 1960s , students, parents, and historians have demanded that school districts offer ethnic studies courses in K-12 grades, in large part because the contributions of Mexican American, African Americans, Asian American, and Indigenous peoples in Texas were made absent in school lessons. The benefits have gone far beyond historical accuracy. Research has shown that students who take Mexican American studies courses are more likely to graduate and pass standardized tests , are more civically engaged, and even develop more self-confidence.In Texas, Mexican American Studies and African American studies courses are approved by the State Board of Education. And that’s the way it should have remained, instead of state lawmakers passing legislation to revise curriculum standards .When HB 3979 becomes law on Sept 1st, students in Texas will lose out on a quality education and teachers and school administrators will most likely feel the wrath of parents that have been intentionally misled. They will also carry the unjust burden of having to defend the basic principle of teaching the truth, as we are already seeing .
Posted by Angela Valenzuela at 10:02 PM 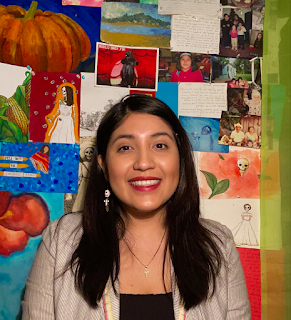