After reading this piece in the Mexico Daily News titled, "TX governor Greg Abbott declares ‘invasion’ of migrants at US-Mexico border" and then coming across this one, I felt even more convinced than I already was that the purpose actually IS to incite anger, anxiety and dread on people who look like me.

I'm in the count of  campaign ads making me feel as though “people do not want me here in the United States.” I would even say that these external political pressures have formed me as a person and advocate.

I am in full agreement that  anger, anxiety and dread  are important responses for studies to track in light of voluminous social science research, including my own, that finds a deep sense of alienation and not belonging when discriminated against. Much of this gets manifest structurally in limited opportunities, poorly-funded schools, disparate achievement on standardized test scores, uninspiring curricula, not being represented in either the presence of teachers of color, culturally enriching materials, and the everyday politics of dismissiveness.

I hope and pray that someday soon, what's happening along the U.S.-Mexico border gets framed as the humanitarian crisis that it is and that relations with our neighbors to the south get normalized so that we can enjoy greater peace and positive inter- and well as intra-group relations.

Getting there requires our leadership to address the root causes of migration that reside back home whether it be Mexico, Haiti, Venezuela, Honduras, and so on. It involves ethical partnerships, equitable policies, an infusion of material resources to promote development in weaker Central and South American countries, expanding human rights, and binational institution building.

Instead, immigrants get casually objectified and regularly dehumanized, treated like political piñatas as part of the gamesmanship of politics today. What we need is good and effective leadership that will lead the way forward with a progressive vision the "huddled masses yearning to breathe free" without which we must sustain this oppression that has literally weighed on us for decades.

As we approach the November election Americans are overwhelmed with the amount of campaign ads flooding their television and social media feeds. It is estimated that by election day over $9.7 billion will have been spent on campaign ads. Between January 6, 2021, and August 7, 2022, 2 million ads aired on national television alone.

The volume of campaign ads can unfortunately be harmful to some members of the public due to the heavy emphasis on immigration and immigrants.

While the United States has been home to an anti-immigrant political climate that has politicized Latino immigrants for several election cycles, it feels as though the volume of campaign ads that focus on border enforcement has increased this campaign season. America’s Voice has reported 700 unique paid ads that have been viewed 52.6 million times on voters’ social media feeds are anti-immigrant, divisive and/or racist. Many of these ads are generating fear and xenophobia by framing the immigration issue around an “invasion” of immigrants coming to the United States, which generates fear and anger.

The primaries push candidates to mobilize the more ideologically extreme segments of their respective parties. It is therefore not surprising there was a heavy use of border enforcement and anti-immigrant ads during the Republican primary. However, what is surprising is that the Southern border was used as the backdrop for campaign ads during the primary season in non-border states. This included ads suggesting weak borders were responsible for drugs and crime in states as far from the border as South Carolina and Alabama.

We are interested in how the exposure to a high number of anti-immigrant campaign ads may impact the attitudes of the Latino population.

LATINO EXPOSURE TO CAMPAIGN ADS AND THEIR IMPACT ON LATINO FAMILIES

We rely on the Abriendo Puertas/Unidos US National Latino Family Survey to get a sense of how pervasive exposure to anti-immigrant campaign advertising is among Latinos. The survey asked respondents if they have seen any campaign ads on television or online that they felt discriminated against or were intended to make the public think negatively of immigrants. Over a third (36 percent) of Latino parents or primary caregivers indicated they have seen these ads, with a higher percentage of registered voters reporting exposure.

The National Latino Family Survey asked respondents who have viewed these ads how this made them feel. As reflected in the figure below, the most commonly reported reaction among Latinos in the sample was “anger”. This was a particularly common response among foreign-born Latinos (+6 percent relative to their U.S.-born counterparts).

The next two most common reactions identified by respondents are “nervous/anxious” at 40 percent and “scared” at 27 percent. When combined these two outcomes that are often measures included in mental health studies, were mentioned by 67 percent of Latinos across the country. This is consistent with the literature documenting how the anti-immigrant politics across the country negatively impacts mental health of immigrants. The anti-immigrant sentiment was expanded by former President Trump and research has found that there is a link between Trump’s racist policies and symptoms of both depression and anxiety for Latinos.

I have found in my own work that living in states with punitive immigration policies does not only impact the health of immigrants, but Latinos overall. This helps explain why U.S.-born Latinos, who are not immigrants themselves, are more likely to report they are nervous or anxious upon seeing anti-immigrant campaign ads than immigrants in the sample (+7 percent for U.S.-born Latinos relative to the overall sample).

Another 29 percent of respondents indicated seeing these campaign ads made them feel as though “people do not want me here in the United States.” This is an important response to track, as the social science literature has found Latinos often report feelings of not belonging or feeling unvalued in society when exposed to discrimination.

Reflecting the variation in Latinos attitudes, 15 percent of the sample of Latino parents and primary caregivers said they felt the campaign ad they saw “was spot on with what needs to be done with immigration policy.” 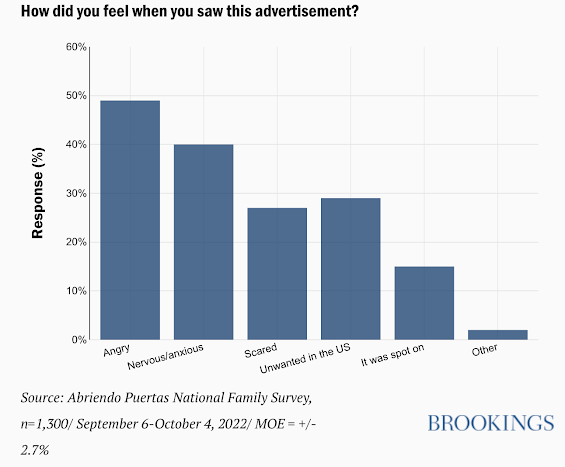 Posted by Angela Valenzuela at 11:53 AM