Sermon on "Abortion, Female Personhood and why Pro-Choice is Consistent with the Bible," by Texas State Rep. James Talarico

I am so inspired by Texas State Rep. Talarico's sermon that argues for women's full personhood instead of the second-class status that the denial of reproductive rights signifies.

I couldn't agree more Rep. Talarico's mother's perspective that "Women can never be free until they belong to themselves."

So much wisdom and clarity here. Thanks to George Hornedo for sending this video and message appearing below.

Rep. James Talarico, the Texas Legislature’s youngest member, just posted a video of a sermon he gave at his hometown congregation in Texas. Rep. Talarico, currently in ministerial school, argued that Jesus Christ was a radical feminist and the Bible is a pro-choice document.

Rep. Talarico shot onto the national stage last year during the Texas Democratic quorum break in 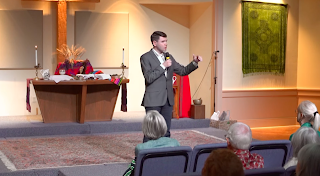 Rep. Talarico is available to talk about his sermon, fighting for a pro-choice Texas, and his role as the youngest member of the Texas State Legislature. Please reach out if you have interest in connecting with Rep. Talarico.

“This summer, more than half our population became second-class citizens.

Every one of our neighbors with a uterus became the property of the State.

“The only way we can allow an embryo’s rights to trump a woman’s rights is if we believe a woman is not a full person—which has been the default belief for most of human history.”

“Being Christian and being pro-choice are absolutely consistent because Christianity is a feminist religion.” [...]

“When a mob of men threatened to stone a woman for adultery, Jesus called out their hypocrisy.

When a bleeding woman begged for help in a bustling crowd, Jesus stopped to heal her.

When a young woman wanted to do theology instead of housework, Jesus honored her choice.” [...]

He gave no preconditions, no qualifications, no exceptions.

Love thy neighbor regardless of race, class, or gender.” [...]

We only have Jesus because a woman consented to creating him.

The story of Jesus begins with a single, simple, extraordinary act of feminism.” [...]

Faith is deeply personal. And your beliefs might not be the same as mine.

That's why we have a separation of church and state—no government can keep you from expressing your religion or force you to express theirs.

But that doesn’t mean we shouldn’t talk about our faith. [...]

On this Sunday before Election Day, we must speak up.

Vote your values on Tuesday.

Posted by Angela Valenzuela at 10:40 AM