The Lie that Invented Racism by John Biewen | TEDx [Video]

In this widely-viewed Ted Talk, John Biewen makes a presentation on the origins of racism, that is, the origin of race as a concept. He reached out to renowned scholar Dr. Ibram X. Kendi and got the answer on how this all began and that you can read for yourselves in his seminal text, Stamped From the Beginning.

In his masterful and authoritative account that Biewen subsequently recounts, Kendi finds that Gomes Eanes de Zurara was hired to write a book by the Portuguese King in the 1450s where he lumped all the people of African into a distinct group. A few years earlier, slave traders with close connections to the Portuguese Crown pioneered the Atlantic slave trade. The book thusly served to justify this trade by pointing to the inferiority of African peoples.

Allow me to expound a bit on this lie that invented racism. Yes, it was invented, created. There is no country or national origin named "white" from which people emanate.

Racialization, a historical and contemporary process, created "others" to justify subordinate status, war, conquest and colonization and to set up structures like capitalism and ideologies like the supremacy of fair- or white-skinned peoples and individualism that disproportionately benefits whites. Western European immigrants that migrate to these shores readily become "American" within a generation or two in their sense of selves, as well as how they are seen by others. 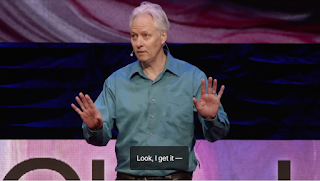 Racialization was designed to rationalize horrific actions and policy decisions that wreaked havoc on Black and Brown people and established an enduring sense of privilege among many white people.

Specifically, Biewen maintains that racism is a tool to divide us and to prop up systems of advantage where some people are more highly ranked than others in systematic, stubborn ways.

Biewen's main personal discovery is that racism isn't a problem for people of color, but rather for white people. It's a "white people's problem," he emphatically states, and not the other way around.

As to how this makes him feel, Biewen says that it's not so much about feelings of guilt, but rather about personal responsibility. He's specifically moved to pull down "the power that we [white people] did not earn."

Great for the high school and college classroom.

The Lie that Invented Racism

To understand and eradicate racist thinking, start at the beginning. That's what journalist and documentarian John Biewen did, leading to a trove of surprising and thought-provoking information on the "origins" of race. He shares his findings, supplying answers to fundamental questions about racism -- and lays out an exemplary path for practicing effective allyship.

This talk was presented to a local audience at TEDxCharlottesville, an independent event. TED's editors chose to feature it for you.

Posted by Angela Valenzuela at 9:29 PM