Dr. Ed Rincon does a good job on his blog, "The Culture of Research," of explaining the outcome of the governor's race in the midterm election. 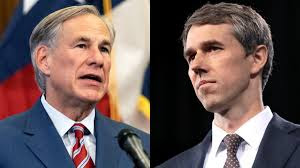 As the media and academic experts explained in various recent postmortems, the outcome of the mid-term election was no surprise and a slam dunk for Gov. Abbott: 54.8 percent for Gov. Abbott and 43.8 percent for Beto O’Rourke -- an impressive 11-point margin indeed. In the various news reports in Dallas News, Texas Tribune, WFAA and Texas Monthly, the consensus emerging from interviews with several political science experts was that Gov. Abbott was destined to win the election given his past election victories, a substantial campaign war chest, and a successful campaign strategy that resonated with Texas voters. A critical question raised during these interviews was: How could Beto O’Rourke lose by 11 points, especially since he had generated substantial campaign funds, had high visibility and substantial political experience?

The explanations provided by the political experts varied but generally included the following:

Although presented as objective appraisals of the campaign, these insights appeared to focus blame primarily on the inadequacies of the Democratic Party strategy and overlooked other tactics employed by Gov. Abbott’s campaign to paralyze the threat posed by Beto O’Rourke’s campaign. Let’s consider some of these tactics.

Remove the Threat by Any Means Necessary. Gov. Abbott’s campaign strategists were very aware of the potential threat posed by Beto O’Rourke’ candidacy and decided to deploy the necessary tactics to reduce this threat. Borrowing from the MAGA playbook, the messaging relied on false information to create anxiety and hysteria about a Beto O’Rourke governorship and the potential damage that would follow such as wrecking the Texas economy, increasing crime rates and illegal immigration, and eliminating gun-friendly laws – just to name a few. Most of the campaign messages lacked factual evidence, presumably because the targeted audience – conservative Republicans – were party loyal, often embracing conspiracy theories, and generally indifferent to facts that challenged their beliefs. A similar tactic was employed by Republicans in other high-stakes areas, such as discouraging vaccinations for COVID-19 and rejecting the 2020 election results.

Control of Media Coverage. From observations of news stories covering the campaign, it was obvious that Abbott’s campaign strategists had exerted influence in media coverage as well. The most obvious example was Gov. Abbott’s willingness to debate Beto O’Rourke only once on a Friday evening that assured the lowest potential viewing audiences, while not allowing the presence of a live audience. This decision clearly minimized the potential exposure of any negative publicity resulting from the debate with a seasoned debater like Beto O’Rourke. Gov. Abbott’s efforts to bus asylum seekers to sanctuary cities also received considerable media coverage that likely amplified his favorability among conservatives in Texas.

Journalists have also been complicit in discouraging Latino voter support for Democratic candidates by their consistent coverage of Gov. Abbott’s polling lead over Beto O’Rourke, the “red wave”  that was supposed to sweep the mid-term elections, and amplifying the significance of South Texas Latinos shifting their loyalty to the Republican Party. Of course, the outcome of the mid-term elections illustrated that this “red wave” did not materialize, although Latino support for Republicans was observed in Florida and Texas. Importantly, less than one percent of all Texans are registered to vote in the South Texas region, which would make their votes relatively insignificant in statewide elections regardless of party affiliation. Nonetheless, the consistent focus of news stories on South Texas Latinos as a bell weather of their diminishing loyalty to the Democratic Party was misleading and a potential source of discouragement to Latino voters and donors to support Democratic candidates.

Misleading Messaging. Gov. Abbott did not waiver in his messaging about preserving the Texas economy by creating jobs, keeping taxes low and attracting large corporations.   While the Texas economy remains strong, it is equally true that the state has fallen behind in several key areas that are often overlooked in news stories associated with Gov. Abbott’s performance, such as:

Exactly how does one glorify a strong economy if millions of residents lack healthcare; if hundreds of adults and children are being murdered by weapons made for war; if hundreds of residents continue to die because lawmakers have neglected improvements to the state’s energy grid; or if Texans are stripped of their voting power to change these policies?

Equally misleading messages focused on (a) Abbott’s struggle to overcome his physical disability resulting from an accident, for which he was compensated up to $9 million, but later supported a cap of $250,000 on pain and suffering awards in medical malpractice lawsuits; using his Latina niece to convey his affinity for Latinos although much of his policies on healthcare, abortion and gun control are especially damaging to Texas Latinos; and accusing Beto O’Rourke of supporting efforts to de-fund the police and increasing crime while it was Gov. Abbott who took $160 million from the Texas Department of Public Safety and tens of millions of dollars from the Department of Criminal Justice and the Juvenile Justice Department to support his failed Operation Lone Star initiative.

In summary, while Gov. Abbott’s campaign team deserves some praise for implementing a successful campaign during the mid-term elections, one cannot lose sight of the fact that his victory was facilitated by a series of misleading messages.

Given the substantial obstacles faced by Beto O’Rourke’s campaign, it was remarkable that he was still able to get nearly four of the eight million votes cast in the mid-term election – hardly a “failed governor race” as it has been described recently in recent news stories.    Journalists analyzing the election results have largely overlooked the fact that Beto O’Rourke was the dominant choice in four of the largest counties in Texas, including Dallas, Harris, Travis and Bexar counties (see Table below). Of the 3.5 million votes cast statewide for Beto O’Rourke, these 20 counties accounted for 86 percent of these votes. Importantly, these four counties are key centers of future population growth in Texas and include large communities of college students. Another important observation is that Beto received support from several counties with large proportions of non-Hispanic whites, including Travis, Collin, Tarrant and Denton.  Consequently, if Gov. Abbott chooses to run again for governor in the next four years, he is likely to face a decidedly larger community of racially diverse college-educated voters who are likely to support a Democratic candidate. 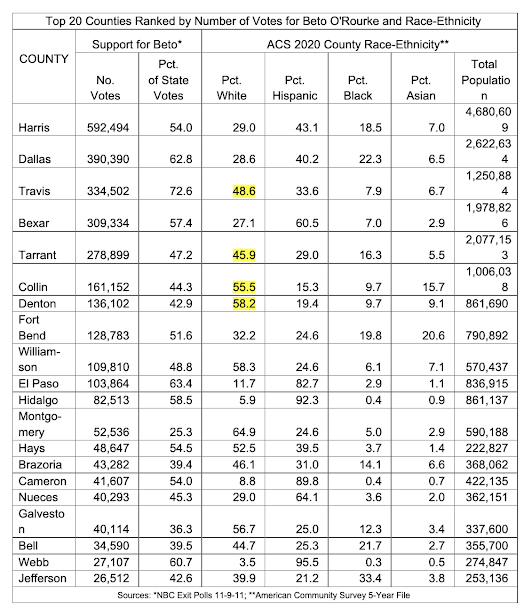 An added advantage for the Democratic Party over the next four years is that Gov. Abbott is not likely to change any of his controversial policies and likely to repeat the same mistakes. Texas voters may be less likely to forgive Gov. Abbott for continuing such past failures, although party-loyal voters tend to be very forgiving of past failures or controversies associated with Republican politicians – including Gov. Abbott, Donald Trump, Dan Patrick and various others.

Beto O’Rourke is a significant asset to Texas Democrats whose value would be enhanced by added campaign expertise.  Indeed, Beto O’Rourke is a recognized and experienced politician, well liked and supported by a cross-section of white, Black and Latino voters and a highly successful fund raiser. It seems shortsighted to suggest that Beto should change jobs or be replaced by a celebrity. His campaign could have benefited from earlier endorsements, such as advertising expert Lionel Sosa or other leaders or celebrities, which could have engaged more voters and donors to support the campaign. The campaign messages were generally well designed but insufficient to address the broad attack ads that were directed at Beto O’Rourke by Gov. Abbott’s campaign. While television was used by both campaigns to drive their messages, Beto O’Rourke’s messages did not appear to utilize radio advertising to the same extent as Gov. Abbott’s campaign --- a potentially significant limitation since Texans spend a lot of time driving their vehicles in large urban areas.  An audit of Beto O’Rourke’s campaign would be very beneficial to explore these issues as well as the role of research in planning campaign strategy.

By building on his experiences with the mid-term election, creating a more data-driven campaign strategy, expanding the list of donors and celebrity endorsements, and mobilizing the nearly four million Texans that supported his campaign, Beto would be difficult to beat in the next governor’s race in Texas.

Texans Face a Grim Future: While the media and Republicans will continue to praise Gov. Abbott’s mid-term election victory, one should take pause and consider that many Texans will have little to celebrate during his next administration. For example:

Congratulations, Gov. Abbott, on your mid-term victory. Unfortunately, your victory has contributed little to the advancement of humanity in Texas.

Posted by Angela Valenzuela at 1:12 PM